Stars and Stripes: Issue I

“People of Western Europe: A landing was made this morning on the coast of France by troops of the Allied Expeditionary Force. This landing is part of the concerted United Nations plan for the liberation of Europe, made in conjunction with our great Russian allies.

This landing is but the opening phase of the campaign in Western Europe. Great battles lie ahead. I call upon all who love freedom to stand with us. Keep your faith staunch – our arms are resolute – together we shall achieve victory.”

Initial reports indicate that all three beachead areas—  Orne, Carentan, and Saint Mére Eglise are now under Allied command. In company with our brave Allies and brothers-in-arms on other Fronts, we will bring about the destruction of the German war machine, and security for ourselves in a free world. 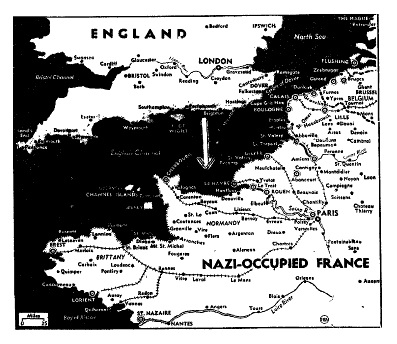 Paratroopers scattered all over Carentan
The night air drop seems to have been scattered all over. Troops pushing inland are encountering pockets of these brave soldiers and everywhere their spirits are high and their objectives are secure despite the dispersed landing.

Sainte-Mere-Eglise Liberated
Though German forces were not eager to abandon their positions in the face of incredible Allied firepower, Sainte-Mere-Eglise has been taken from the enemy after days of heavy fighting. A near-run thing, Axis forces fought tooth and nail to the bitter end.

Rome liberated!
Crowds of Italian people cheered on the GIs as they liberated the Eternal City. The Italians have suffered long under the facsist yoke and were ready to be liberated. The dogface in Rome are befuddled. No sooner had the 5th Army made its historic entrance into Rome before the biggest news of World War II, the opening of the Second Front, dropped like a bomb on the local scene.

Pfc. Bill Ellis, Mobile, Ala., was walking down the street searching for his pals who had whipped off in a weapons carrier and left him stranded. Like most Gis Ellis had heard the news second hand and didn’t quite believe it. “Sure is a hunk of news” he declared. “I’ve been waiting for it since North Africa. It won‘t be long now till Jerry gives in, I hope, Rome and the Second Front will be too much for him. We oughta be home in six months.” 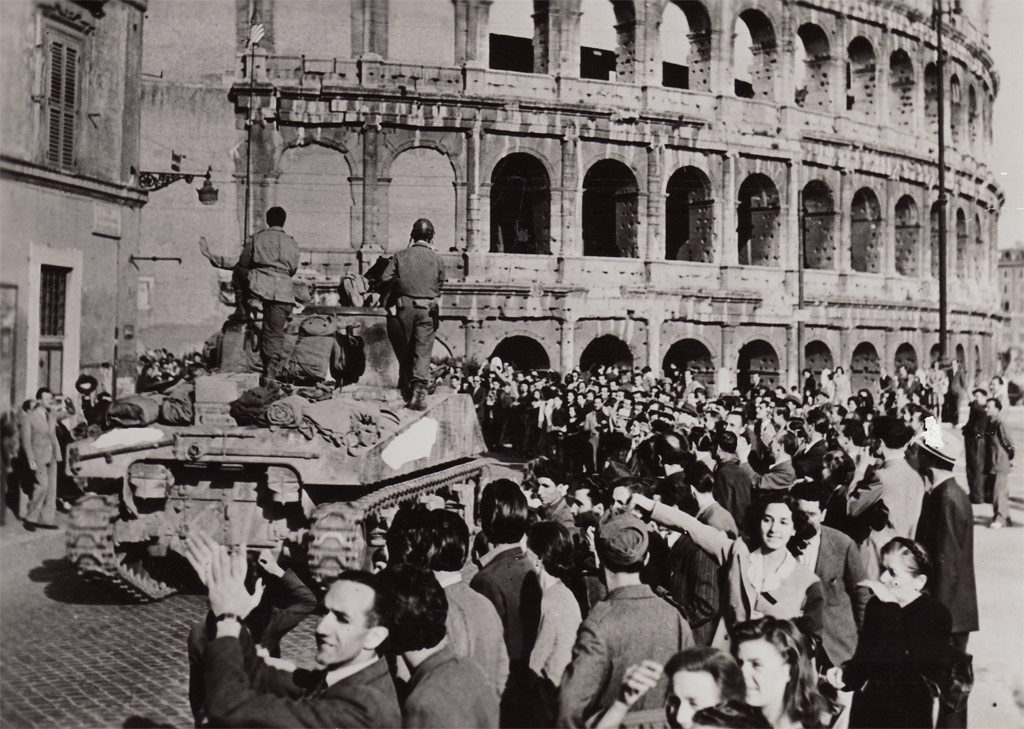 Breakfast of Champions!
As our GIs are fighting in hostile territory in Northern France they need nourishment, and the US War Department has developed three sets of hearty meals! The K-ration breakfast has all the healthy ingredients the fighting man needs, 4 tasty Chesterfield cigarettes to help him get a good start in the morning, A satchel of instant coffee that is as good as any coffee in Paris, accompanied with four sugars to sweeten the day and give our G.I. the energy he needs. A can of chopped Ham and Eggs, just like a good Sunday breakfast that his mother made accompanies Eight crackers to the taste and texture. Then, Dentyne chewing-gum to freshen the mouth while giving protection to the teeth. Light up another Chesterfield and your GI is now in fit form for battle! 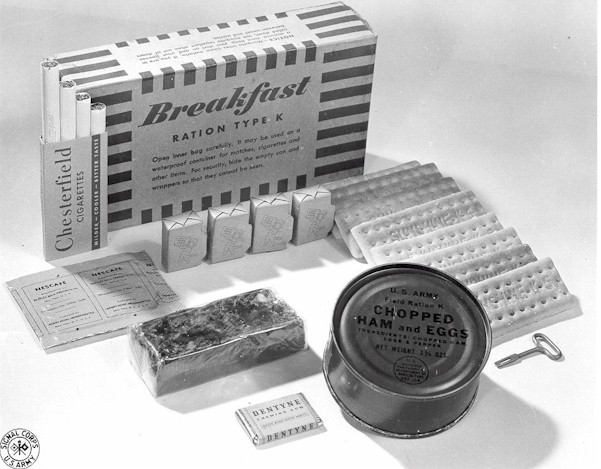