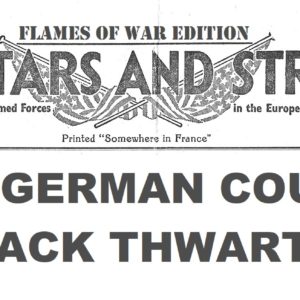 At the start of the week the Germans launched a desperate Counter-attack against the US forces around Vire and Mortain. Thankfully this attack has now been contained with serious losses inflicted on the Germans. Stars and Stripes managed to get an interview with General James Westerfield:

“You could say that this attack has worked in our favor as Jerry lost a lot of tanks. These very same tanks would have been harder to root out had they been used in defense in this hellish bocage.”

When asked if he was aware of battle fatigue among our forces he said:

“Well the G.I.s have been fighting now continuously for four weeks and that is a lot for our doughboys. But they are well trained and supplied and possess a fighting spirit second to none. Remember the same is true for Jerry but he does not have the arsenal of liberty behind him. As we push on we have also been able to land fresh troops and soon they will be ready to launch a fresh breakthrough. I pity Jerry for what is about to happen.”

Hard Charger
First lieutenant Abe “Attack” has been noted as a hard charger. Leading his Shermans he is at the front of battle and pushing through the lines. With men like these we will be in Paris by August and Berlin by Christmas! 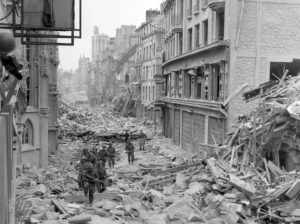 Caen, the Capital of Ruins
Our British and Canadian allies are fighting hard in Caen. This old French town now resembles ancient ruins or a scene from Dante’s Divine Comedy. Reports are still coming in of heavy fighting in the ruins. The British general Red Beaver has told us that the heavy Churchill tanks have proven very useful in and around Caen and Jerry has little to stop them.

“The Churchill has proven to be an excellent piece of kit, it’s thick hide has saved the lives of many an old boy. And if Jerry brings out his Tigers then you Yanks have supplied us with some useful M10s which we have fitted with our own 17 pdr anti-tank guns which make quick work of any cats Jerry brings along”.

General Red Beaver is confident that they will crack the German defense very soon. Caen and St. Lo are now both contenders for the “Capital of Ruins” and an example of the devastation caused by Hitler’s war of aggression. 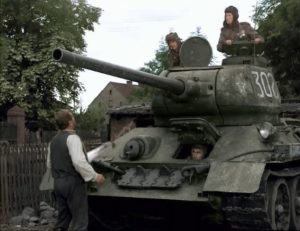 Help From an Unexpected Quarter
Some of our troops have been surprised to see strange tanks in the bocage of Normandy. These sleek warhorses are no other than the warhorses of our Soviet allies. Podpolkovnik Ruchey comes
across as a striking example of a brave warrior! “We are fighting for the workers and peasants of France and saving them from the Fascist yoke of tyranny!” The soldiers of the Red Army have received a warm welcome by the Franco-Tieures et Partisans, while being met with a degree of reservation by other French forces.

U.S. Army Field Ration D – Now With Improved Taste
It should come as great news to our boys in the front lines that the old Field Ration D is coming out with a greatly improved taste. This famous chocolate bar: “To be eaten slowly in about half hour. Can be dissolved by crumbling into a cup of boiling water if desired as a beverage”. Speaking to pvt fc Stiltman: “It looks like chocolate but tastes like a shoe sole” remarked Stiltman, referring to the chocolate bar that should by specification should taste a little better than a boiled potato. “Yes, well they exceed expectations there, I’d take a boiled potato over the D ration chocolate bar any day, not to mention that I broke a tooth trying to chew it. In fact I was told the only reason we still have bayonets is to consume this brick of bad taste.” Here pvt fc Stiltman refers to the hard block being able to withstand 120°F so as to be carried on one’s person but don’t expect it to melt smoothly in your mouth. Thankfully the new formula tastes with a hint of chocolate and is called a K ration bar or Hershey’s Tropical Chocolate.

Next Stop Falaise, Argentan, and Lorient
As the German resistance weakens we must plan for our next step, a Breakthough from the Normandy front. Stay tuned for orders from high command. Through the mud and blood to the
green fields beyond!