It was a misty and wet day, and the Allied Paratroopers shifted nervously in their muddy fox holes. They had been tasked with holding a bridge over the Cance, a small stream that flowed around the outskirts of Mortain. They had been assured that a platoon of Shermans would arrive to bolster the defense but as yet no Shermans had arrived. However, they had received a message via radio that the Shermans were only a few minutes away. Suddenly ,one of US infantry had stood up and pointed across the river. Through the mist indistinct shapes had been seen, and those shapes had been heading for the small bridge which spanned the Cance… 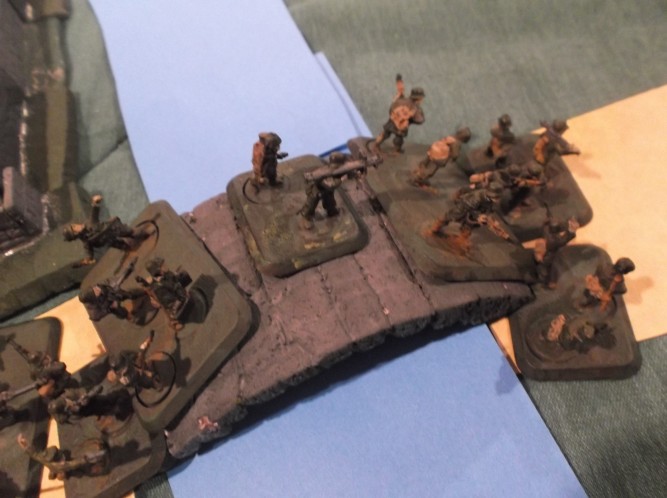 The Panzer grenadiers charge across the bridge.

The Axis infantry had dashed over the bridge, hoping that they would not be held up by MG fire from the paratroopers. The US paratroopes had fired their LMGs at the Panzer grenadiers, but they had only managed to take out the first two Axis infantry. The Panzer grenadiers had hidden behind the hill. The Panzer IVs advanced on the bridge. The German tankers fired at the infantry, but to no effect. 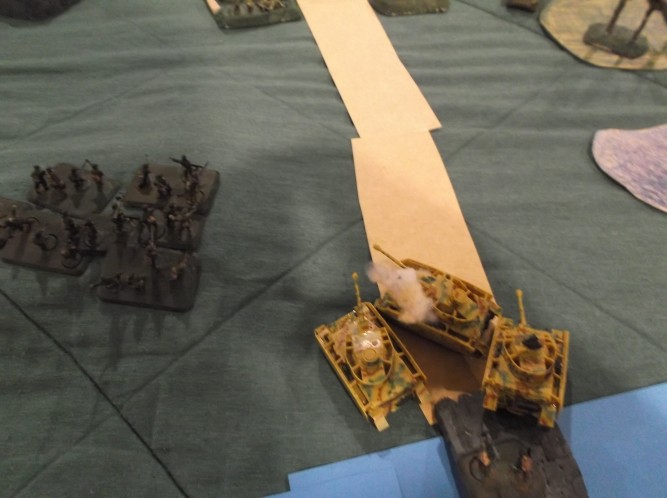 The Germans refuse to retreat.

The long expected Shermans arrive, and temporarily halt the advance by killing one 76 and bailing out another. However the Germans just push past the burning wreck and continue their relentless advance. One Sherman succumbs to a 7.5cm shell. The Shermans fire back, but all their shells are blocked. The Panzer grenadiers march up the hill, and, despite losing a team to Paratrooper fire, attempt to clear out the American strong point. They are unsuccessful in their attempt, and are all but wiped off the map. The Panzer IVs succeed in killing yet another Sherman. The battered Allied defenders get their act together, and kill two the Panzer IV and five infantry teams. 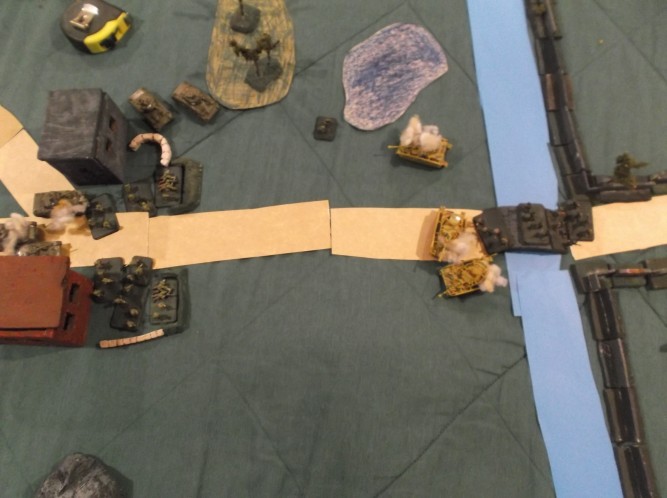 The Panzer grenadiers lament thier lack of armor support.

The four remaining German infantry teams, realizing their hopeless situation decided that they were going to kill something before their own imminent demise. They just managed to kill the bazooka team making it a happy(ish) ending for the Axis.

I should really get the Axis some more armor. I'm thinking some stuGs or maybe more Panzer IVs.