What follows is my after action report of the action dated 3 November 1944. After our bloody landing on Utah beach, my force consolidated for a drive on Boche armored forces in the area.

We made contact not far from St Mere Eglise, with Boche infantry and artillery dug in along a river. I ordered a quick probing raid (Tactical Edge card-Stole Hell On Wheels from my opponent) and with information gained launched elements of La Nueve company of III/Regiment De Marche Du Tchad on a rapid advance supported by tanks of 501eme RCC. I placed my flak and artillery assets consisting of mortars and 105mm artillery in a supporting position of not only the main advance, but a reconaissaince in force of my Spahi reconaissance unit. During the advance, my infantry identified minefields emplaced by the Boche, and proceeded to dismount their transports to clear the mines while my tanks waited in the woods. My Moroccans and FO identified a german infantry position, and fired an artillery barrage on their cursed heads. What wonders of American technology, rapidly reducing the enemy unit to below 50% strength! Also, we were fortunate to get American air support, who proceeded to harass the Boche artillery hiding behind a church.

In response, the Germans unmasked a battery of their 88mm cannons. These weapons are to be feared, mon colonel, but the Boche must have been drunk on their rotgut schnapps as they missed my tanks. But, the boche were able to call artillery on my infantry as they worked to clear the mines though casulaties were relatively light. I responded by shifting my 105mm battery onto the 88s, blasting them from their positions with what the Americans call a “Time on Target” barrage. My infantry however failed to clear the minefields, and I knew Le Boches would be getting support soon. So, I contacted Monsieur De Saxe of the Maquis, and wonder of wonders, he succeeded in sabotaging the bridges leading to the town! Viva la Resistance (French Resistance Raid command card)! All the while, the American air support continued to tie up the German Hummels and my mortars pounding the hapless boche infanterie.

It was at this time my Spahis saw the way to our objective open, and in a maneuver worthy of L’Emperor Napolean himself stole a march right under the German’s noses! With the Boche hindered they attempted to get Tigers to the battle, and though the dreaded armored beasts appeared, they were slow and clumsy. As my Spahi Marocains secured our objective, my infantry and tanks massed and their defense in tatters the Boche chose to flee like the cowards they are! 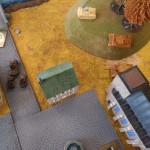 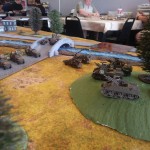 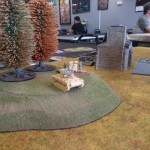 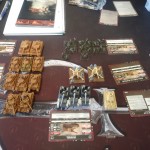 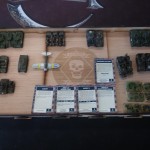