This was the special Dust Up mission. Instead of delayed reserves they use Fast reserves, changing the dynamic of the mission considerably. My opponent was Dagur Ingi who does not play in the campaign so he becomes Max Mustermann. 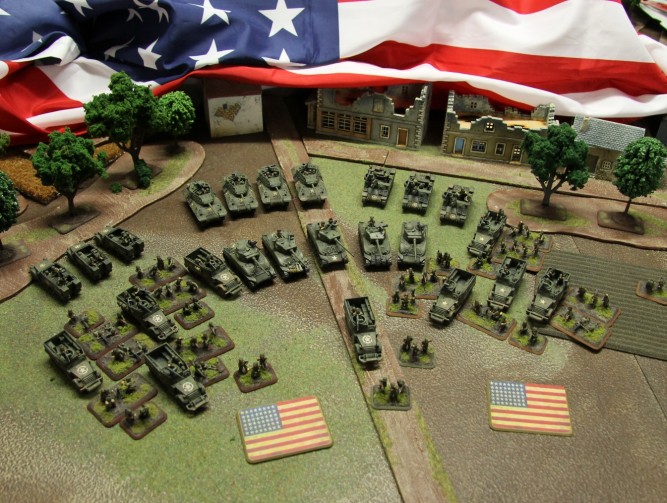 This time around I went for usual Armored Rifles resembling the 4 Armored Division going for the breakthrough.

Reserves, M10 and one armored rifles.

Hit on 3+ but gave room for more units and strong armor. 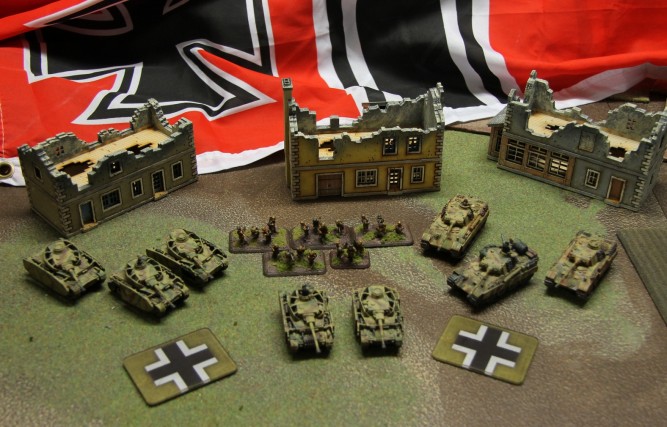 5x MG Panzergrenadiers with a panzerfaust 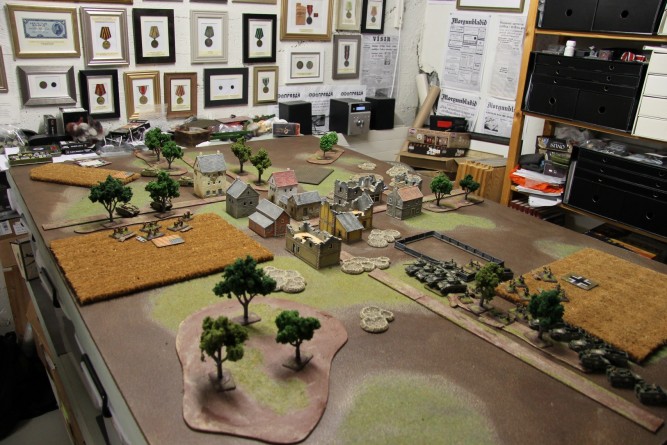 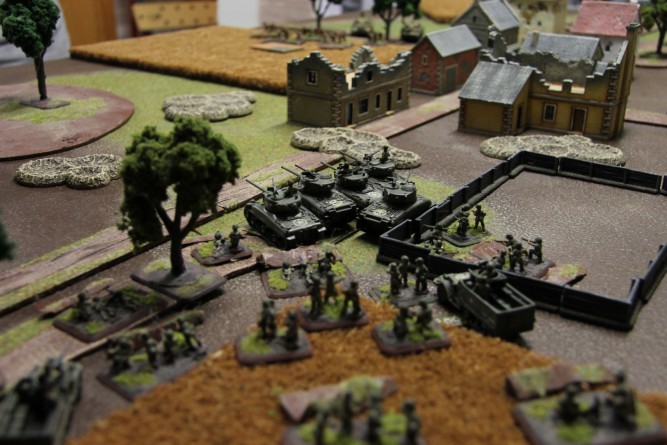 I planned to go in fast and hard. By providing target saturation I hoped to dictate the battle on my terms. However Fast reserves change the dynamic greatly so a more cautious approach might have been favorable. I planned to put pressure on with my Shermans and mortars while my reserves swept up the flank. 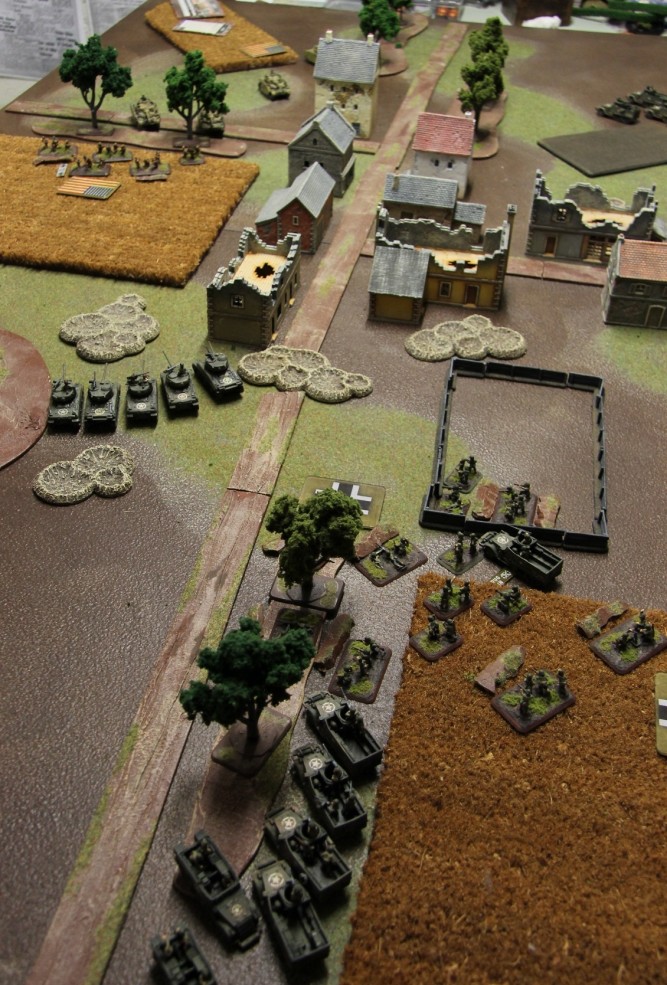 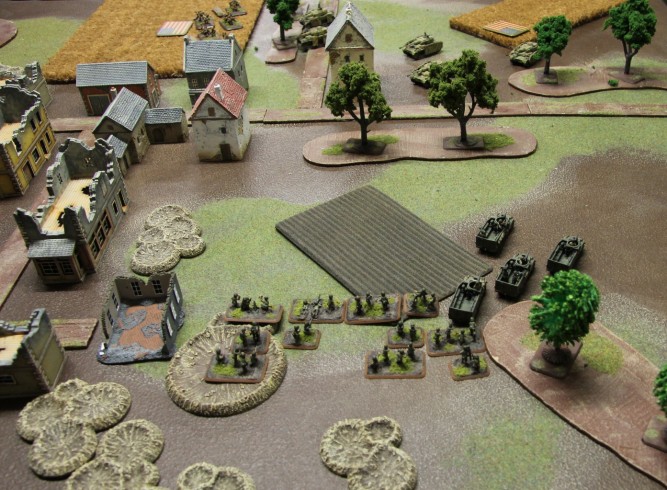 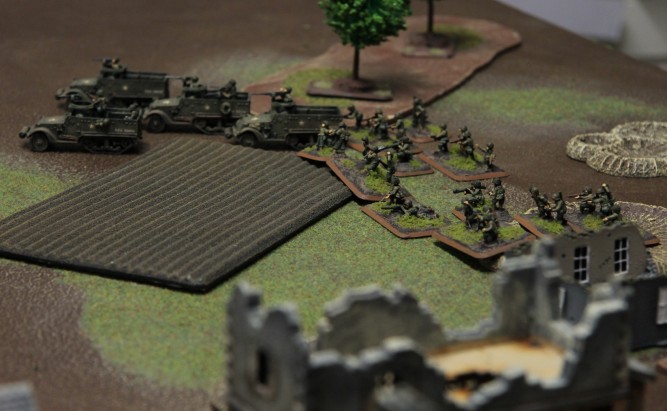 First reserves arrive, I push hard towards the rear objective while my Shermans advance rapidly putting pressure on the defender.

I knew I was in harms way but I was hoping to overload Dagur's defense from the start. 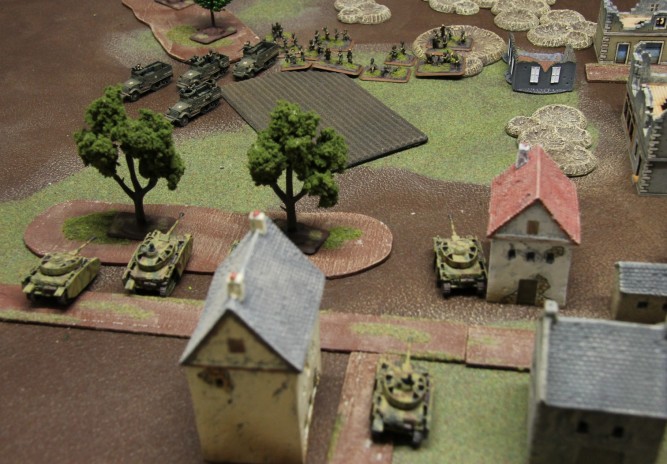 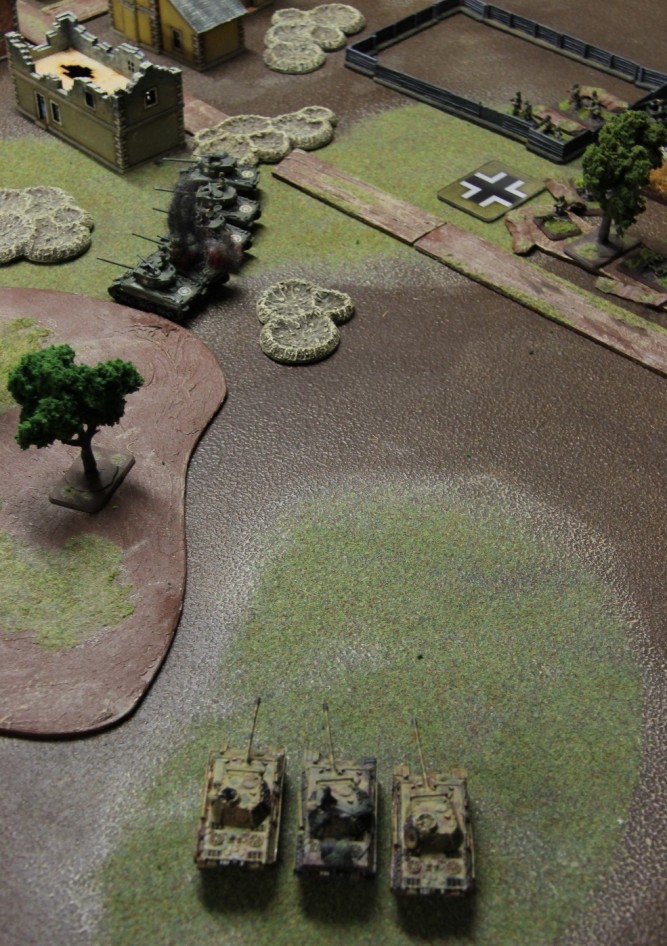 Dagur got his Panthers from reserve and moved to the rear of the Shermans while his Panzer IV both from HQ and his platoon faced of the infantry. He destroyed one Sherman and one infantry team which was acceptable casualties as my plan was working. 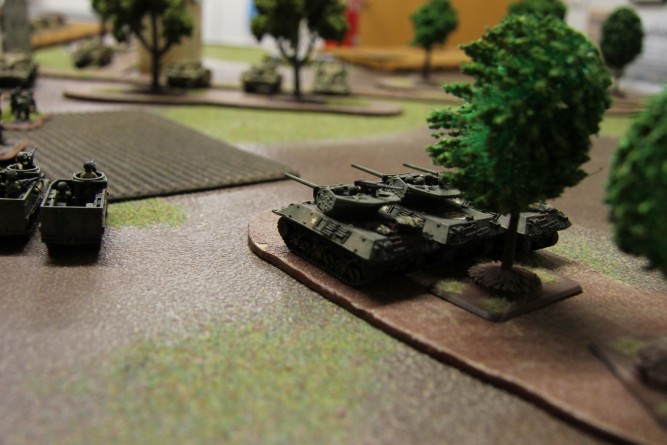 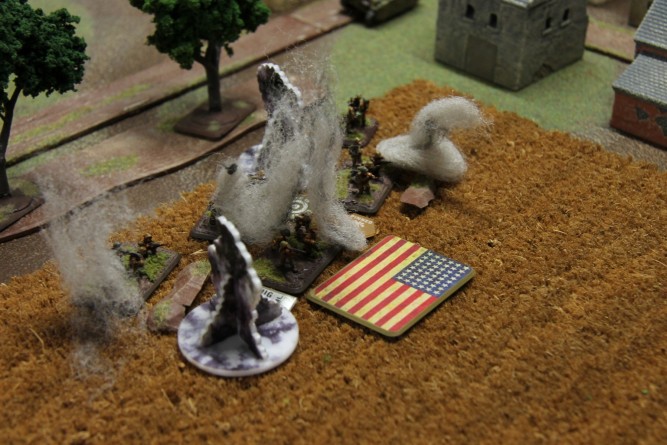 M10's arrive from reserves, my infantry pushes forward on the flank and my shermans go up the road for side shots. Sadly two shermans fail to cross craters left by US bombing.

Shooting was abysmal. I fail to hit with a single shot, bazookas, M10's, Shermans. Artillery scores two hits that are saved. 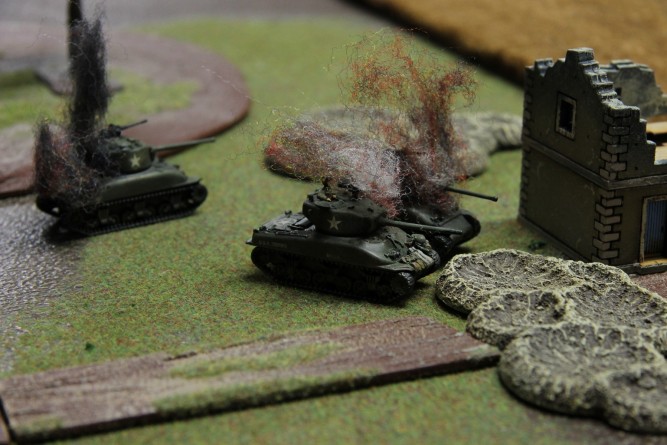 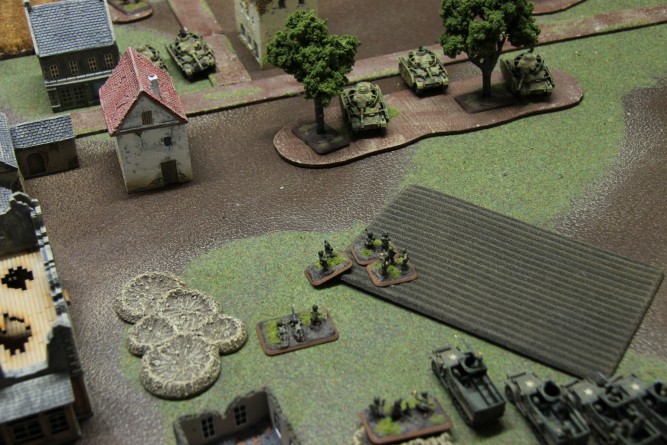 The return fire was devastating, Panzer IV's mowed down the armored rifles and the Panthers destroy the two Shermans that failed to cross. 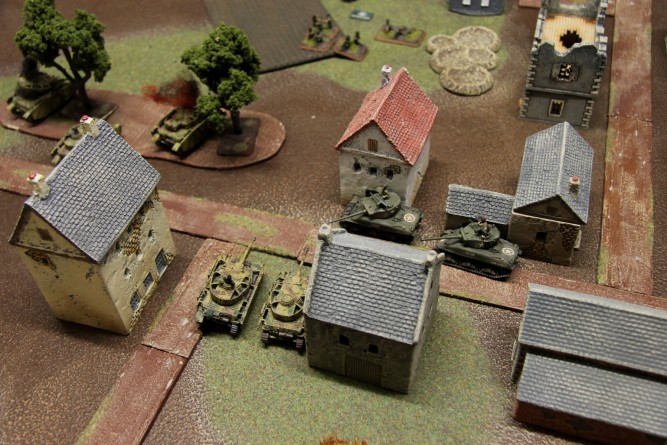 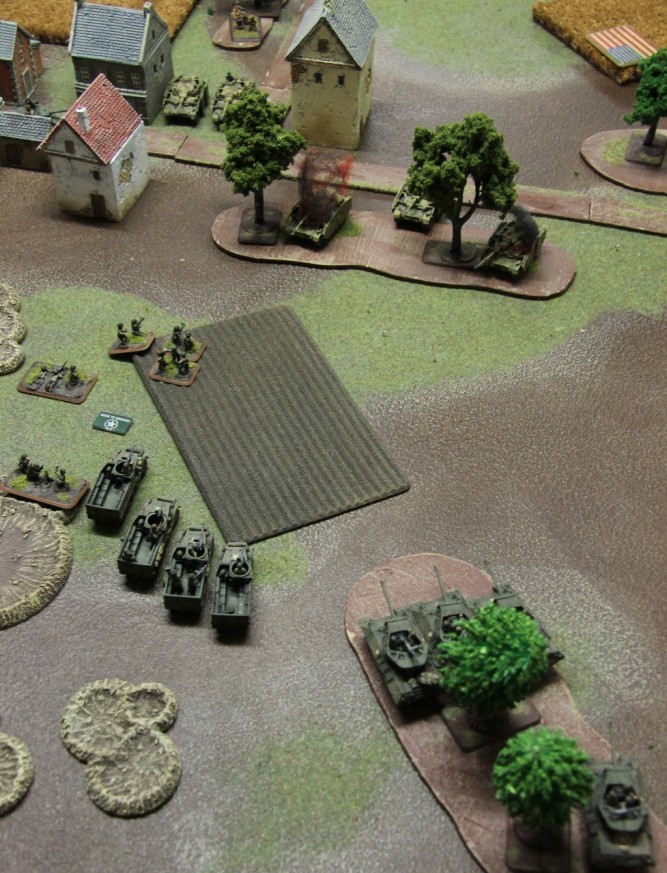 My failure to destroy the Germans last turn was damaging, but still I had the numbers. My remaining two shermans push against the Panzer IV HQ while the Wolverines, which had not been fired on because the Panzer concentrated on the infantry, go for the Panzer IV platoon.

Two Panzers of the platoon are blown apart but again the Shermans fail to find their mark. 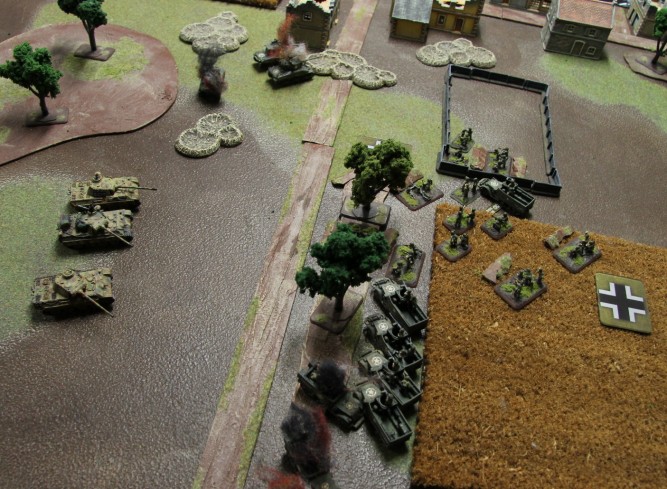 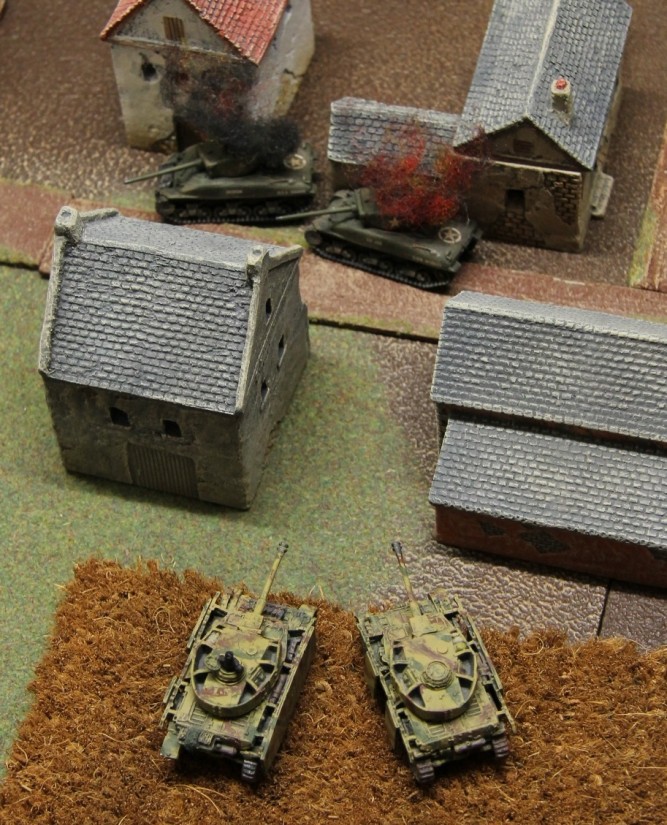 The last Panzer IV flees, so Dagur brings his infantry to cover the objective. The Panzer IV HQ moves in for side shots against the Shermans and the Panthers turn on the Armored mortars.

Shermans are destroyed, one mortar and the other two bailed.

With no good targets the M10's and infantry move towards the rear objective hoping for a better firing solution next turn.

The Mortars remount and stay in the game. Failing to hit the Grenadiers.

Panzer IVs and Grenadiers move out catching some of the remaining infantry in with MG fire. The Panthers wipe out the mortars, while the US infantry only has 2 teams remaining! 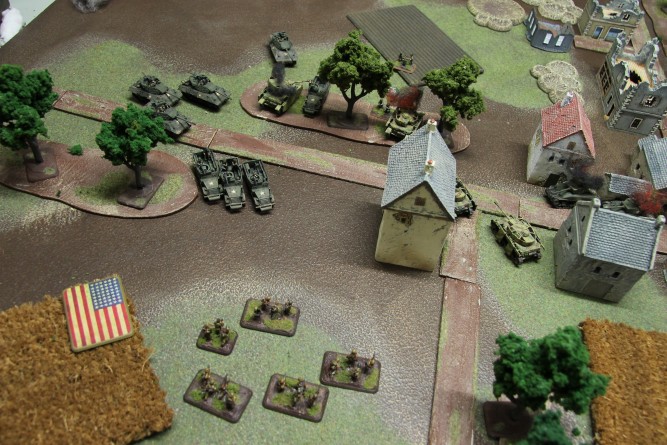 Shooting sees three panzergrenadiers destroyed and hits on both Panthers. One can only be bailed and after firepower test both are only bailed... not the best when your opponent has protected ammo and command re-roll! 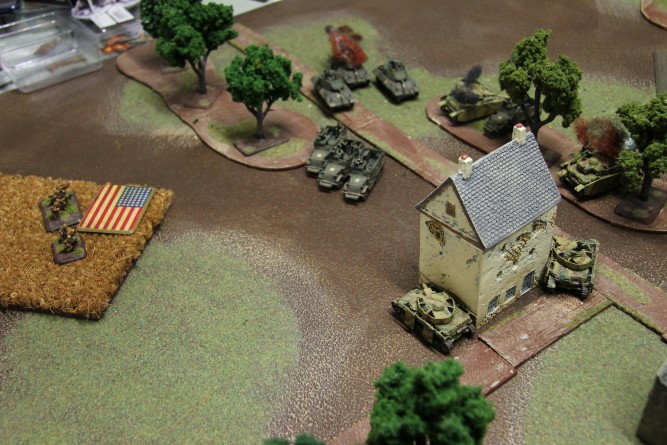 The Panzers remount and the Grenadiers stay in the game. Panthers start firing their main guns against the armored rifles and the Panzers take out a single M10 while the armor of another saves it.

The M10s try to take out the Panzer IVs and destroy one, the half tracks fail to destroy more panzergrenadiers. 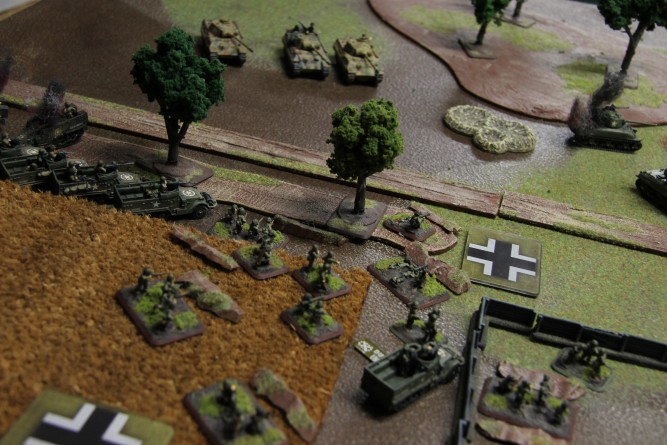 Panthers take out two infantry teams, but it is going to be a slow process. The last Panzer IV scores two hits against the M10s destroying one and bailing another. 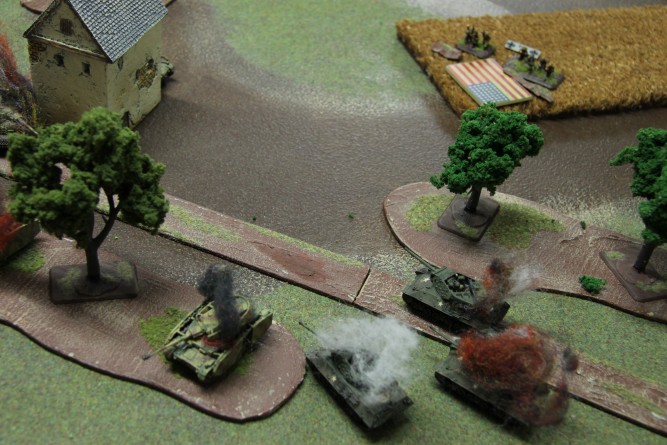 The bailed M10 fails to remount.

The attack has failed. 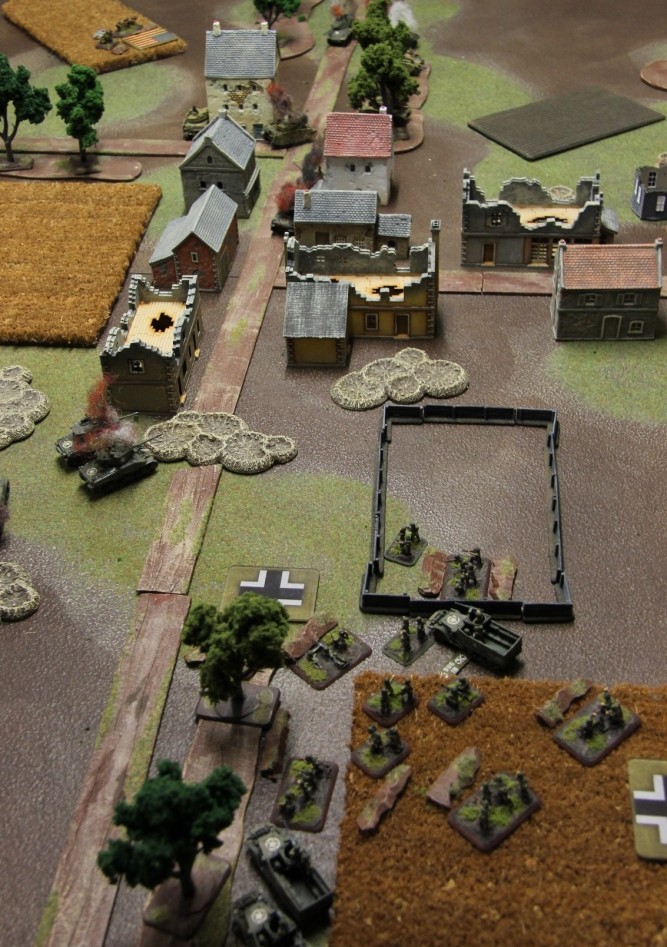 So ends the bloody business of the day.

We shake hands. Dagur is down to 3 Panthers, 1x Panzer IV and a Panzergrenadier unit in bad spirits.

With unlimited time the Panthers will eventually wear down the remaining armored rifles but after 2 hours and close to 2300 hours we call it a day.

It was a great game, very dynamic and exciting. My failure to score hits at critical moments was my downfall as I expected to take casualties. If I had managed to take out a Panzer IV earlier it would have left the Germans in bad spirits and won the day or opened the way to capture the objective.

Mistakes were made. I should have covered the Shermans with smoke that failed to cross, but other than that my plan was fine. My dice rolling was not.

But it was a good game and we both had fun!

7 People Recommended All American for commendation