After the first round, we break for lunch, so I had about 90 minutes to eat and think about the loss. The one advantage, if you want to call it that, of being on the wrong end of an 8-1 loss is that you'll be on the bottom, probably drawing another opponent that lost 8-1. I was determined to rethink my deployment after discussions with my previous opponent. My new idea was to keep my AT assets centrally located so they can react in either direction to an opponents armor threat. I'd still deploy my infantry on objectives in a primarily defensive role. I was also open to a different "battle plan" should the opportunity present itself.

As this was the 2nd round of a 3 round tournament, my list remained unchanged. For those who have not followed, here is my list breakdown.
One of the biggest frustrations I have faced in a tournament was always what to leave in reserve, and after that decision was made, how I am going to "weather the storm" until my full force is on the table. I decided the best thing to do would be to develop my list around ONE reserve unit. A Tiger with an escort tank and the Rapid Fire command card would cost 45 points, one more than the required reserves of 44 points. From here, it was about building a list that could hold or attack until the Tiger arrives. Two full strength platoons of Panzergrenadiers, one full strength section of Stummels, one full strength section of armored mortars, and 3 PaK 38's would make an excellent hard to break formation. I felt I was a bit light on AT, so 10 points for 3x Diana's would be perfect. The list was set.

My opponent brought a Soviet Hero Motor Rifle Battalion to the table. I was quite excited to see the force in action, because I'd like to build a Soviet Infantry list (I have 2 blister's of Naval Infantry for a rainy day.) His force shaped up rather nice. Two full companies of Infantry, both backed up by PTRD's. One company was supplemented by Maksim HMG's, plus there was a seperate 6 gun section of Maksim HMG's. Additional formation assets were a 6 tube section of mortar's and a 4 gun section of ZIS-3 (76mm) guns. Formation support was the ever present IL-2, a 4 gun section of SU-76's, 5 T34-76 (late), 3 BA-10's, and a 4 truck section of Katushya's. His command cards were 1 Molotov Cocktail and 2 copies of Tenacity. Overall, I liked his list. I think I'd build it differently

However, after looking at ALL those HMG's, I knew I couldn't send my troops forward. I knew he had a lot of artillery, but the low Soviet skills didn't frighten me. I figured I'd have to find a way to silence the Katushya's and/or the SU-76's early or their better skills could hurt my infantry. Despite my thoughts about being open to a different battle stance, I'd use defend once again. My opponent followed suit with a defend. We rolled for mission and we got "Free For All". 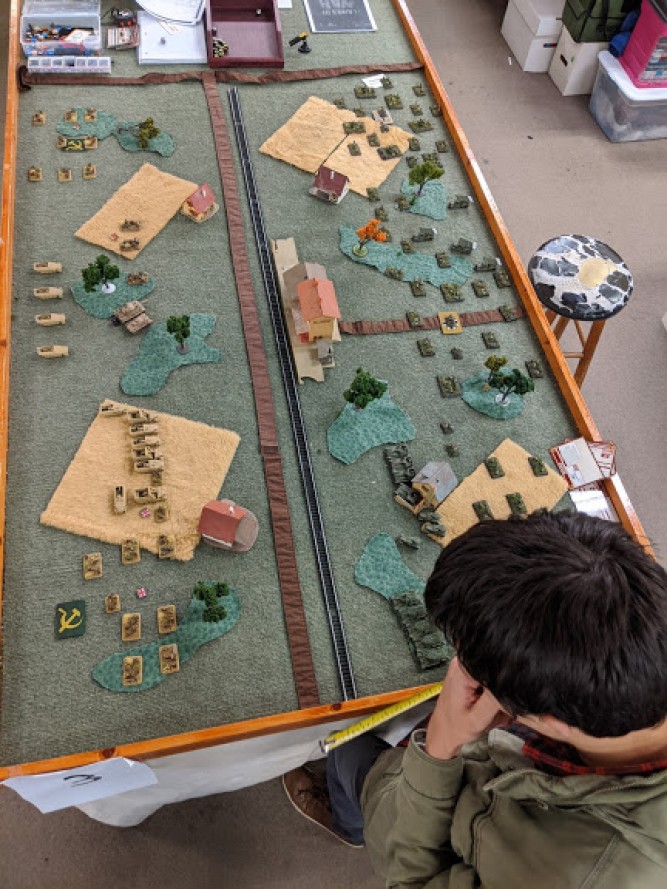 Alexsei won the die roll and took the first turn. In a rather odd sequence, with 2+ cross checks on his T-34/76's, he issued a cross here order to come out of the woods and close on my right flank. He followed this up with a cross here order from his SU-76's to take a forward position in the woods. Later in the turn, he attempted to fire with this units, but I instructed him that this was not allowed by the rules.

My first turn saw the need to move the Tiger to respond to the T-34 threat. I dashed to cover ground quickly, hoping to engage in round two. However, the SU-76's and BA-10's were in line of fire of the Stummels and Diana's. There was no need to move, they opened fire and eliminated both units. The HQ unit called for mortar fire on the center objective, hoping to begin some repeat bombardments.

His next turn saw him make full use of the Soviet Red God of Battle. "Stalin's pipes" needed a 5 to range in on my left flank, which he connected on the first hit. His mortar's needed a 6 to range in on my right flank, which he also connected on the first hit. The T-34's performed a tank assault on the pinned down infantry and pushed them out of the foxholes, but not off the objective. His aggressive action required a prompt response. If I didn't silence the T-34's, the game might be over by turn 4 again.

Turn 2 saw me repeat the bombardment and attempt to soften the center. The Tiger moved in to secure the objective, but was unable to connect with any shots. My infantry also failed to rally from a pin, forcing them to remain out of foxholes. Therefore, I re-positioned them to avoid repeat bombardments. 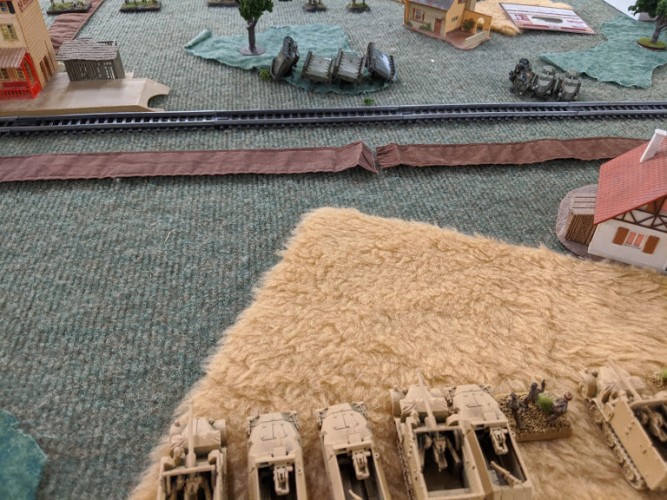 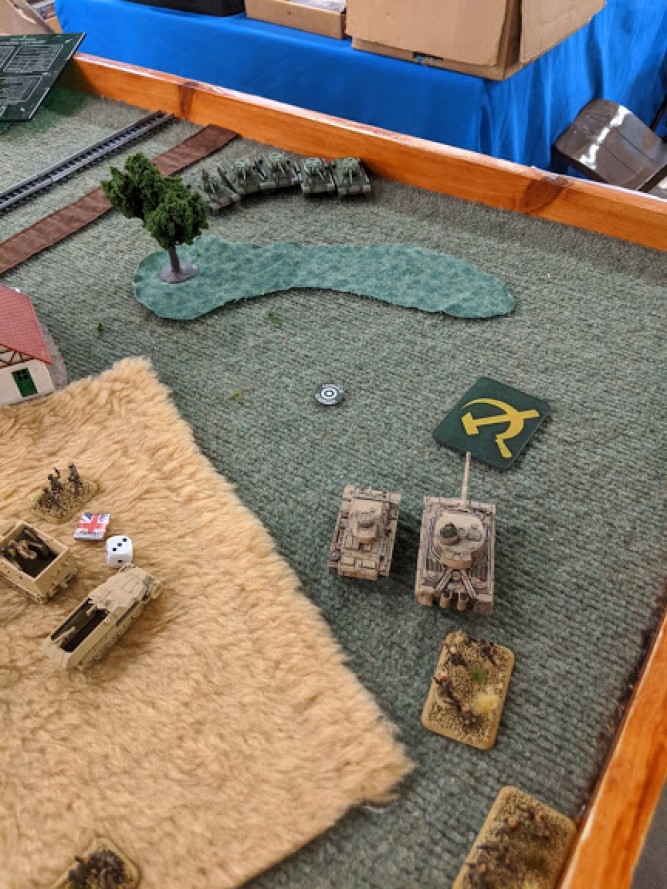 The appearance of the Tiger was caused the T-34's to retreat back to the safety of the Soviet lines. Air support arrived and after taking a few insignificant hits from a SDKFZ halftrack, they rake the Diana's with direct fire weapons. The shots connect, knocking out one and bailing another. Meanwhile, the Katyusha's continue to do work, staying on target with the Panzergrenadiers.

I finally was able to rally all of my troops, and continued to move them to avoid repeat bombardments. The Diana remounted, and the Diana's and Stummels engaged the T-34's, taking out two of them. With the SU-76's, and two of 5 T-34's down, the next turn would be time to move the mobile assets forward to start an assault on the objective.

His next turn found the continued work by the Katuysha's. Again, he ranged in needing a 5 on the first try, and this time all but eliminated the Panzergrenadiers. With only 3 stands and 3 Pak-38's left on the left flank, I was convinced I would lose.

My next turn saw me divert the Stummels to a cross country move to retake position in the center of the table, behind the train depot. The HQ team also re-positioned to provide support as well. Meanwhile, the Tiger and Dianas moved forward to begin the assault.

His next turn saw the IL-2's return, this time to devastating effect. In one attack, he wrecked 2 stummels, and bailed another. The T-34's continued their retreat back to the objective. He also broke the Panzergrenadier platoon guarding the left flank. I was worried. All he needed to do was move a near full strength Motor Rifle Company directly foward about 36 inches to win the game, with only three Pak38's and 4 Armored mortars nearby to offer resistance.

Next turn, I failed the remount from the Stummel, and they failed their last stand check. The broken, but not routed Panzergrenadier platoon on the left flank was reduced to one stand. It made the last stand check, but there was little to do with this stand. The Tiger swept in, and started to clear out the Mortars. The Dianas engaged the T-34s and took out two of the three remaining tanks. 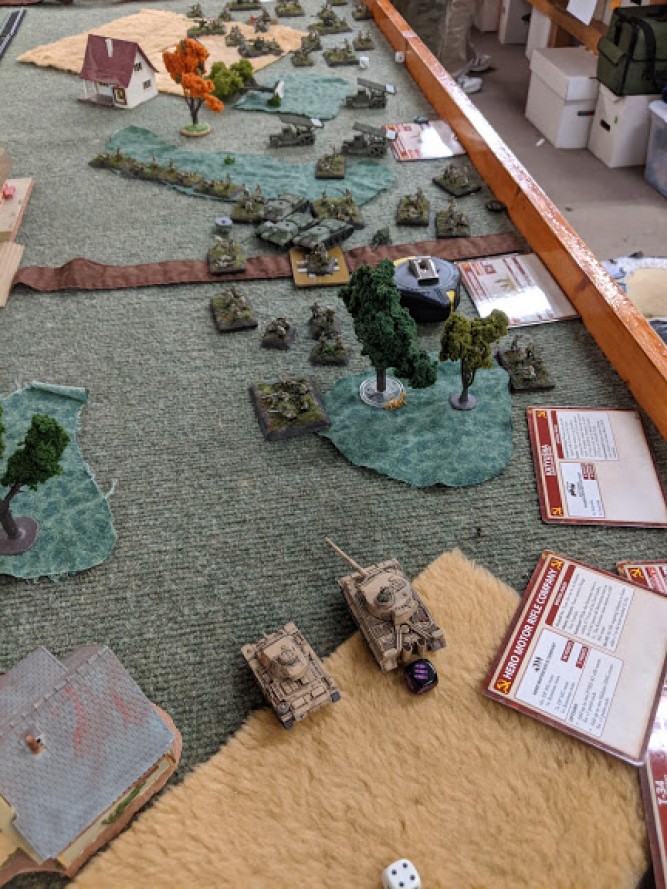 I'm absolutely baffled why he has not yet moved his Motor Rifle Platoon forward. Victory is only 36 inches away. Yes, he would have to abandon his foxholes, but I have MINIMAL defense left. He does finally attempt to move the Maksim HMG section forward, but after accurate fire from the mortars and Pak38's, the HMG's eventually return to defend the center objective. Finally, around turn 12, he starts to move the Motar Rifle Platoon forward towards the objective. However, by this time, the Tiger is pushing on the objective, and aside from ONE Molotov cocktail card, he has nothing left in the center that can destroy the Tiger. I begin making pushes on the objective around turn 10, but his forces are spread out enough that I can't take out more than 2 stands per assault.

The turns were going fast. I was trying to desperately claim that objective and win. When a call for 15 minutes left in the round were left, he finally started to move on my objective. Given the breakneck pace of the end game, I didn't get many pictures. On turn 13, when my Tiger assaulted, he used his Molotov Cocktail, and on the first round, he connected two. Without surprise, one of the saves resulted in a one. My push was done. All I had left was a draw. By turn 15, time was called, and his Motor Rifle Platoon was still over 12 inches away from victory. Well placed mortars keep them pinned down and time is called. Sadly, given the pace, I didn't take many pictures of the late game stages.

The list I played was one that I worked of about 6 months. Two matches in, I found myself playing without reserves twice. 24 hours before the tournament, I had an idea. What if instead of a Tiger + Escort, I used a Ferdinand + escort. The savings would allow me to bring a 5 tank section of M14/41's as well. In both rounds, the Ferdinand + Escort + M14/41's would have served more valuable than the Tiger did, even with the tiger almost single handily winning the game for me.

I do feel fortunate in getting a draw from the match. Alexsei absolutely should have moved on the objective LONG before he did. Once I had committed the Tiger and Dianas to the objective and the Stummels were silenced, he could have threatened the objective without sacrifice of his defense.

I also liked seeing the Motor Rifle Battalion in action. The force I've considered trying to build finds three T-34's using the formation tanks, an increase in SU-76's to 5, leaving the mortar's and HMG's behind, but keeping the integrated HMG and PTRD's. I saw enough out of the force in opposition that I'd like to complete the force. I just need to find some time to paint ALL THOSE SOVIET INFANTRY MODELS.

Finally, the opponents MVP far and away was the Soviet Red God of War. Stalin's Pipes and the Mortars were relentless. He was ranging in, hitting, and making FP checks at an unreal rate.