It was a cool Friday night. My son finished his homework and wanted to play the "Great" war. I offered to play a game of Tanks with him, and he shouted YES. He insisted that he get to play the British, leaving me the Germans. While he finished his dinner, I "set the table" in another way. 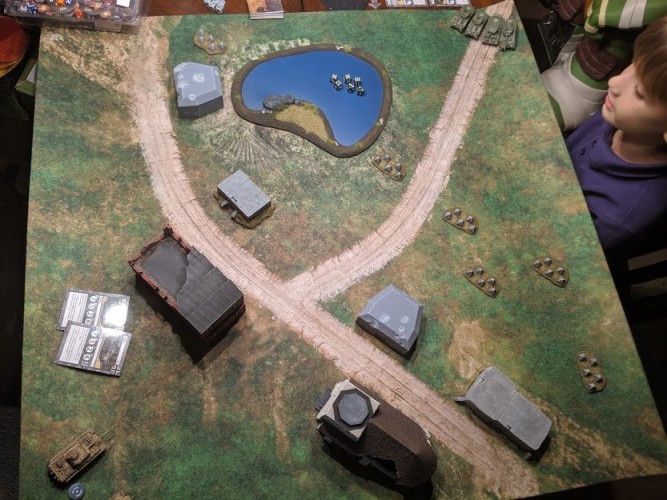 The defensive line on the outskirts of a peaceful French village.

Since it was my son's first battle, I tried to keep things simple.
Two Sherman V's, one Sherman Firefly, and one Cromwell. 74 points. No upgrades
Keeping things on the simple side, I sent two Panthers and two Anti-Tank bunkers. 76 points. 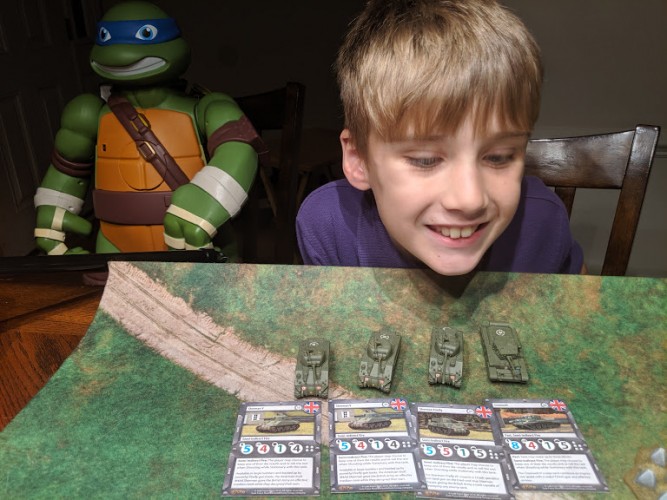 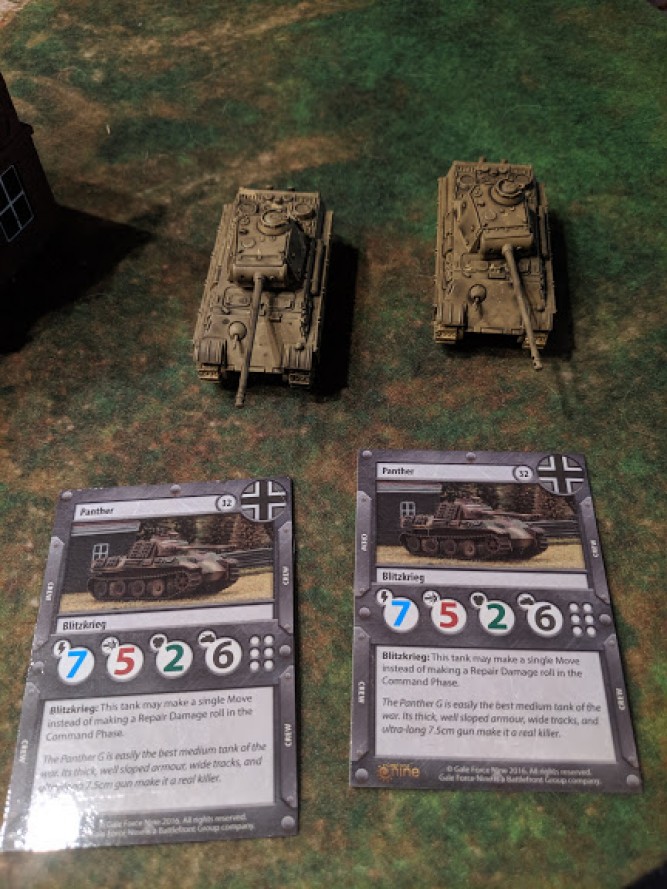 Bobby rushed one Sherman across the top of the map, while sending the other three tanks right down the road. He shouted "I'm going to get you". The young British commander was eager to get into the fight, paying no heed to the legendary Panther guns. I cautiously advanced, counting on the "Laws of Probability" to save me.

The Cromwell opened fire first, connecting form some minor damage on a Panther. The cheers from the younger commander were heard throughout the house. I returned fire, and connected with two critical hits on the Firefly and one critical hit on the Cromwell. I was worried that I might discourage him, but when he shouted "I'll get you back!", I felt safe. The bunkers fired, and inflicted minor damage on a Sherman. 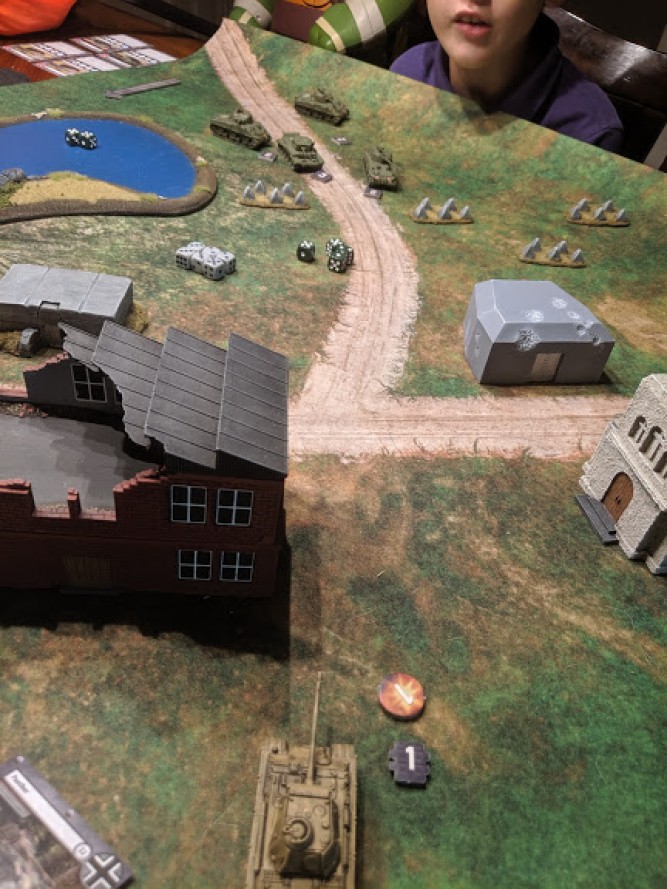 The first damage of a young tanker's career. 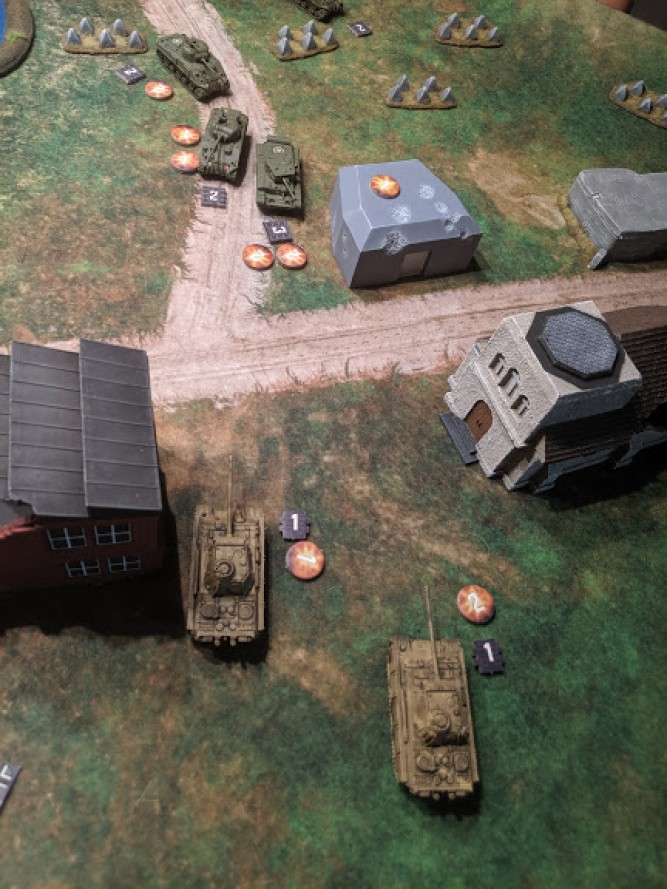 The situation after turn 1

The British continued to charge forward, eager to close the distance and engage the big cats at close range. I continued slowly advancing, again relying on the "laws of probability" to save me.

The Cromwell opened fire first, only to miss. The Panthers however, ganged up and took care of the Cromwell, leaving it in flames. The Sherman's then continued to focus their firepower on the most damaged Panther, scoring his first kill. "I told you daddy!" he shouted. When the bunkers opened fire, another Sherman V was also left in flames. 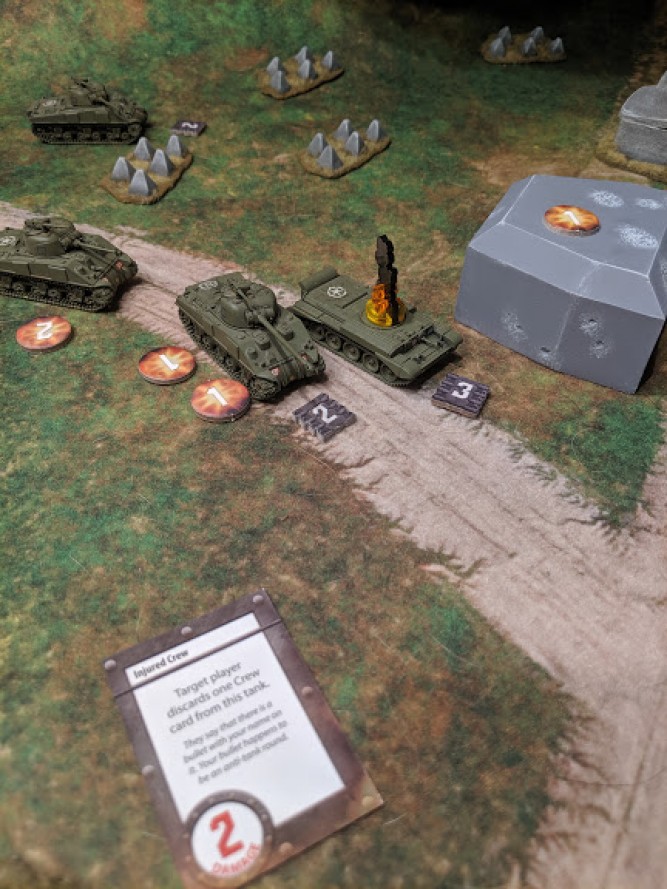 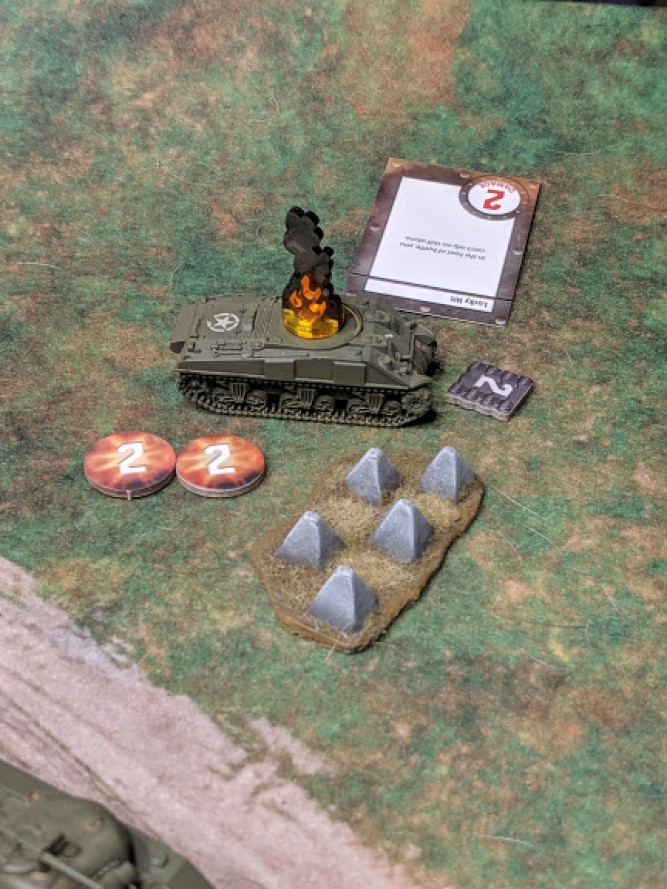 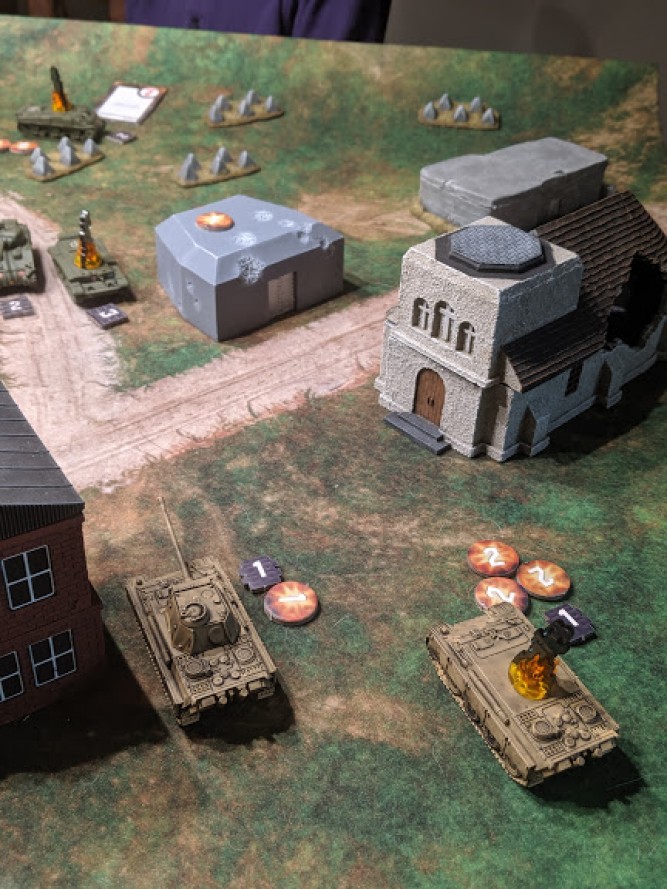 The British, in a rather unexpected move, spit their forces. The Firefly cuts across the face of the Bunker, seeking shelter beside it. The Sherman V, recalls Lord Tennyson, and charges the Panther.

When I open fire. luck is on the side of the British, as my shot is deflected by the Sherman. The Firefly makes short work of the bunker, and the Sherman V inflicts some minor damage on the Panther. 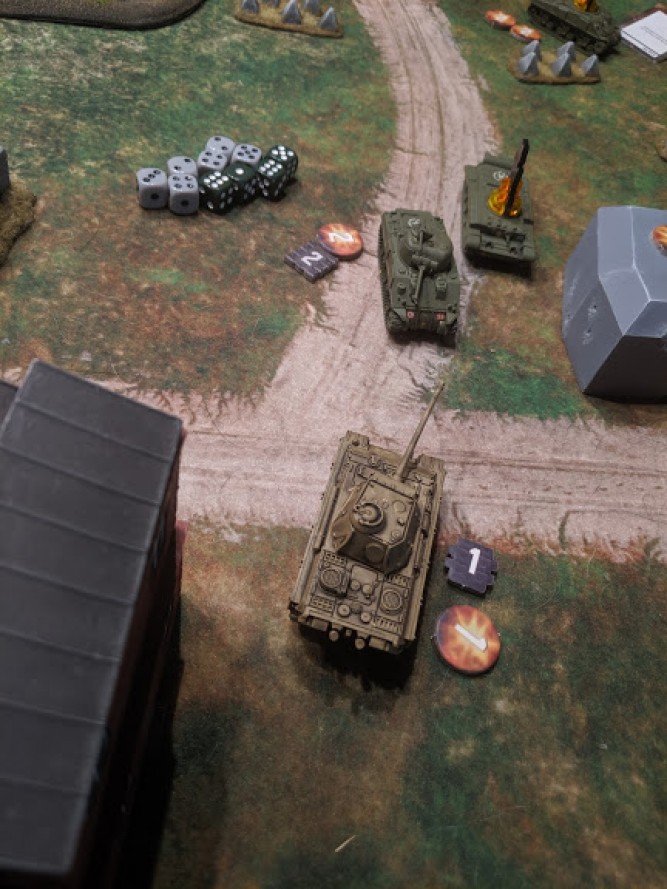 Charge of the Sherman V 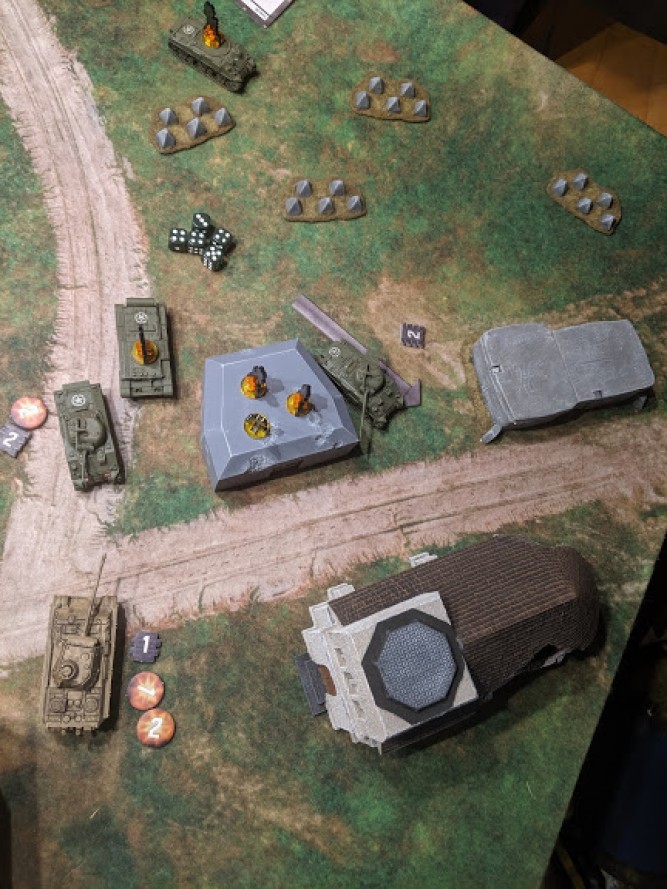 The Firefly moves to flank the Panther

The Firefly continues to flank, moving around the church. The Sherman V continues to advance with reckless abandon, ignoring all caution and drives past the Panther. I continue my cautious action and take position behind the Sherman V,

The shot to the rear of the Sherman V have the expected outcome, with the Sherman left burning. However, the final fury does land a small hit. 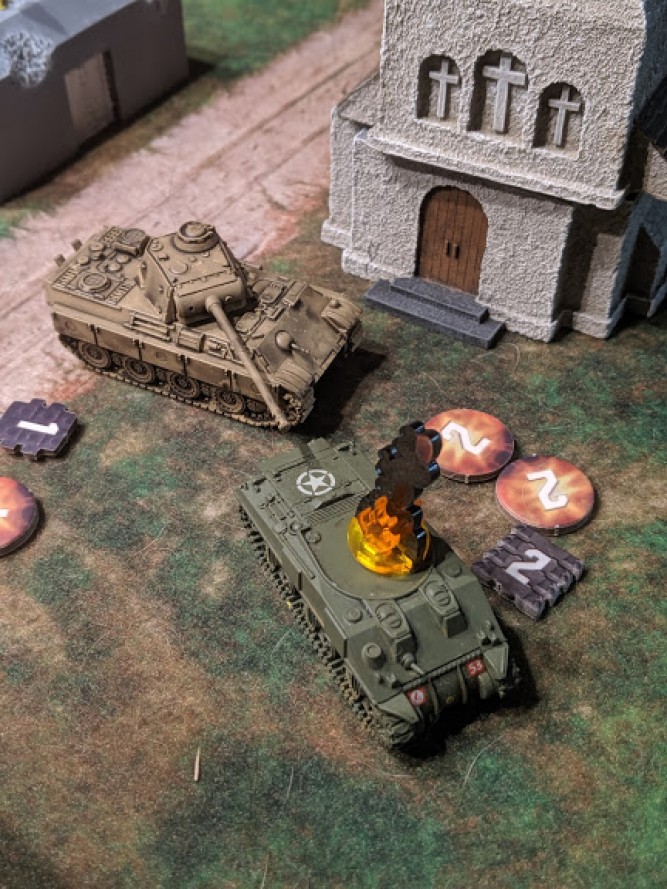 Aggressive tactics lead to disaster for a Sherman V crew

The Firefly sees the objective and makes a dash toward it, With the objective threatened, I'm forced to move quickly and respond.

I open fire, but miss completely. The return fire from the Firefly however finds a weak spot, and leaves the Panther on fire. 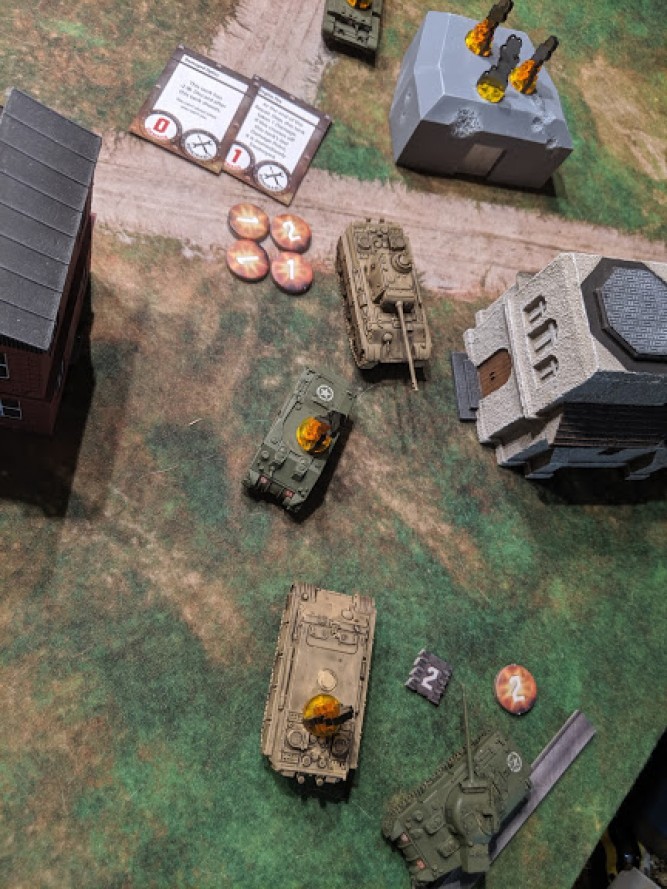 The tank is on fire!

Victory is close, so the British move in on the objective. They know if they can survive one more round, the fire will take out the Panther. I have no choice but to move close to the objective to prevent a VP.

I open fire at point blank range. I score two critical hits and a normal hit. I'm convinced that I have won. His defense roll however is equal to the task. He takes his shot at the Panther, and he misses.

The balance of the game rests on the repair roll, which I fail. The Panther is destroyed. The British Win. My son darts quickly to the other room to inform his mother that he was the winner. He may have won the battle, but hopefully, I'll win the war 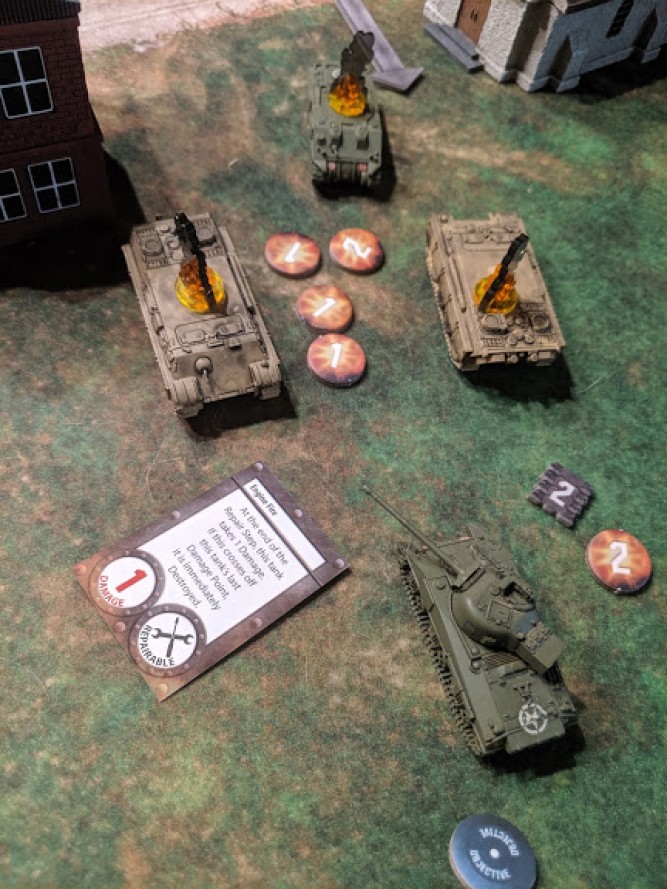 The fire is out of control, forcing the crew to bail out.