I rather enjoy the FoW/TY game, and I've considered looking at competing in a bigger tournament like at Historicon. However, every time I play in a local, 3 round tournament, I feel like I've ran a marathon while doing a fencing bout at the end of every mile. I am just beat up. I'm mentally exhausted and my legs and back hurt after spending all day on my feet moving toy soldiers around. It baffles me, because as a teacher, I spend all day on my feet. So, going into the third round with a record of 0-1-1 and 4 vp's, I expect a fun match. I'm rewarded with a game against Geoff, who've I've logged the most games with over the previous year. I know I'm going to have a good match.

Geoff's force is a pretty straight forward American Armored Rifles team. HQ and two platoons, backed up with T30's and Armored Mortars. Support options are M3 Lee's, M10 GMC's and a section of British 6 pounder guns. Our mission for the game would be Breakthrough, which I'm excited about because I don't get a chance to play it often.

The table layout for this match to me screamed breakthrough. A small dense village on one corner, with some area terrain in a chokepoint in the center of the table. I knew I had to deploy the Panzergrenadiers in both area terrain patches to choke the middle. I'd deploy the Pak38 on one flank. The Stummel's would be kept in a mobile position and the Diana's would be held in reserve. I placed the HQ forward in a building, with the mortars nearby to support the inevitable engagement. The Tiger, was in reserve.

Geoff gathered his forces as far forward as he could. Both armored rifle platoons and the HQ section were going to make a hard and fast dash directly to the objectives. The Lee's were in reserve, likely to be a late game push on the objective. The mortars and T30's were deployed to the rear in an support position. The M10's were behind the halftracks and the 6 pounders were positioned in a street. 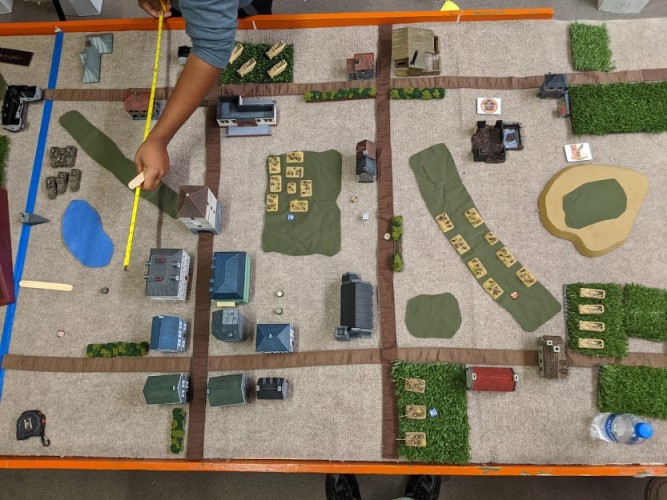 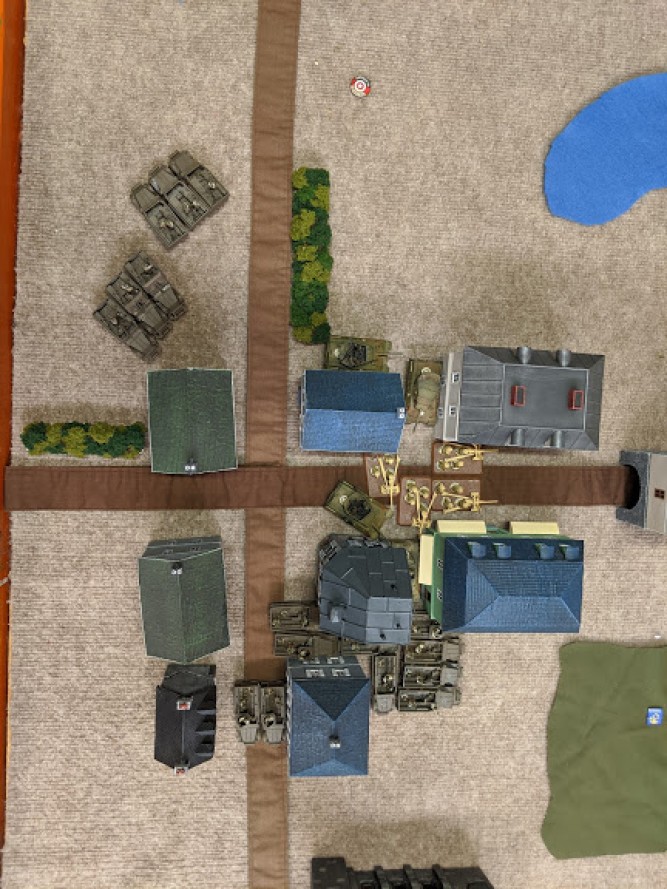 Breakthrough is a 6 turn mission, so the attacker has to get up and go fast. They can't get caught up in a delayed engagement. Geoff decided to go for broke. Turn one saw his Armored Rifles dash forward as far as they could. The dash placed the tracks in a position where I really couldn't get much fire on them, so they were pretty safe. The M10's follow suit, however, there was a firing lane to allow the Pak38's to get a shot on 2 of them. The 6 pounders moved up the street.

In return, I called in fire on the 6 pounders, taking out two guns and opened up on the M10's, destroying one. I left everything else gone to ground.

Next turn, Geoff advanced his halftracks through the gap at tactical speed, creating a kill zone. This is where the battle would be won or lost. He would have 4 turns, with the late arriving Lee's, to clear and secure the objective. I had to move. I repositioned the Stummels to support the objective, moved one Panzergrenadier platoon to cover the objective, moved the Pak38s to bring fire onto the halftracks, sprung the Dianas from ambush, and brought the Tiger on from reserve.

After the smoke cleared, three half tracks were destroyed and 5 were bailed out.

What happened next took us some time to sort out.

Remounts and rallies. Without surprise, needing a 6 to remount, none of the bailed out half tracks remounted even with formation command re-rolls. Next, came the unit last stand check, because a transport platoon was not in good spirits. Geoff failed this, and failed the re-roll from a formation command.

The question at hand. What happened to troops inside the three non destroyed but routed half tracks? The rulebook didn't define it. Lessons from the front didn't clarify it.

Did the transports run away with the troops inside? One could logically state that if the drivers felt that it wasn't safe to stick around, then the drivers wouldn't put the troops into harms way.

Finally, if the troops were deposited from the now routing tracks, what happens to those troops? Are they pinned down? Are the immediately fit for duty?

It took us about 10 minutes to sort this out. We decided to deposit the troops without them being pinned down. 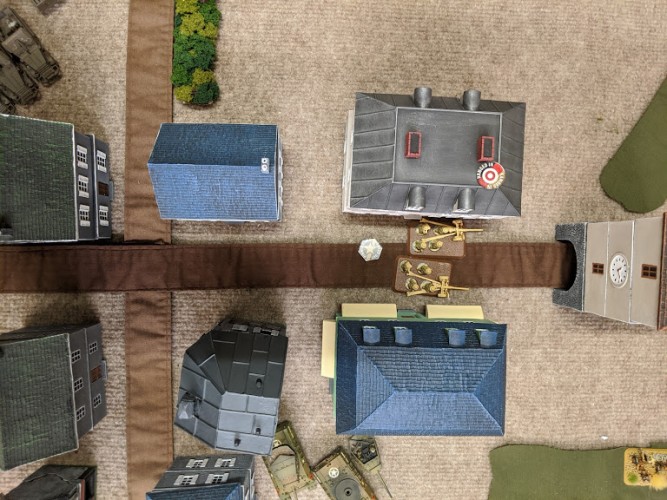 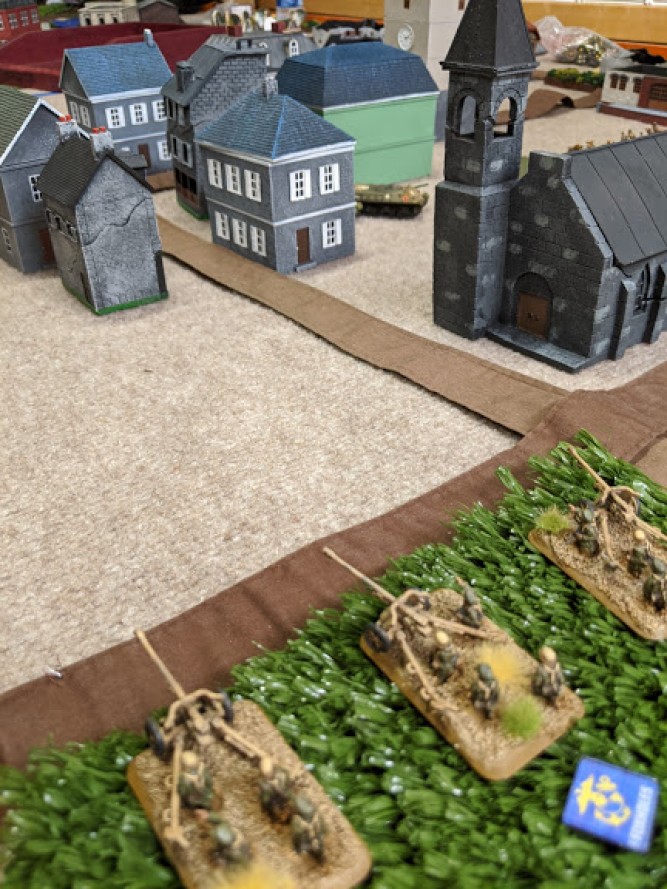 Open fire on the M10 GMC 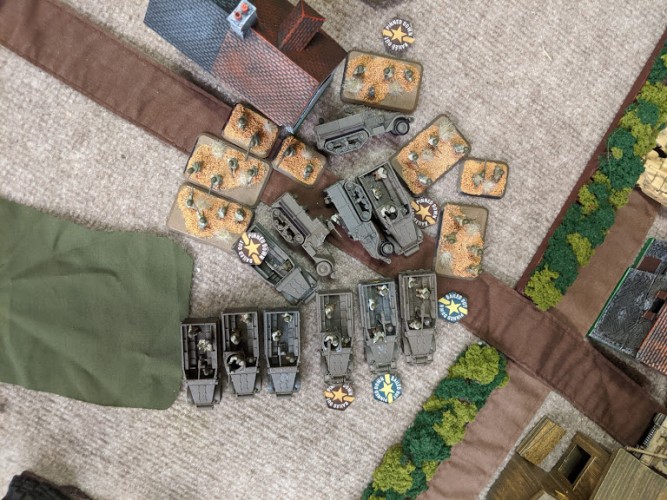 The dilemma. What to do with the troops inside of routed half-tracks.

It was turn three of a 6 turn game. Both objectives were close together, so what was going to take place over the rest of the game was a meat grinder. Geoff immediatly broke for the woods attempting to envelop the Panzergrenadiers. Fire was exchanged between the German and American infantry, with minimal casualties.

The other panzergrenadier platoon moved envelop the envelopers, and more fire was exchanged the between the infantry platoons, again with minimal casualties.

Round 4 found the Lee's arrive, and they made quick work of the Stummels. The opening allowed the US infantry to assault the ruins, pushing the Panzergrenadiers out. The now destrroyed Stummels caused Geoff's imminent victory, so the Tiger had to move in to contest. Only one Lee is destroyed by the Tiger, and a counter assault by the Panzergrenadiers forces an Armored Rifle Platoon into a bad spirits.

On turn 5, the American's fortify the building, bringing all remaining troops in and around it. The Lees and M10's engage the Tiger and take it out. Again, at the end of turn 5, Geoff is in position to win. My turn five finds the Armored Mortars finally reaching the meat grinder after taking a few turns to reposition and take up a contesting position.

His final turn, turn 6 was unable to clear the objective, likewise with my turn 6. The game would end in a draw. 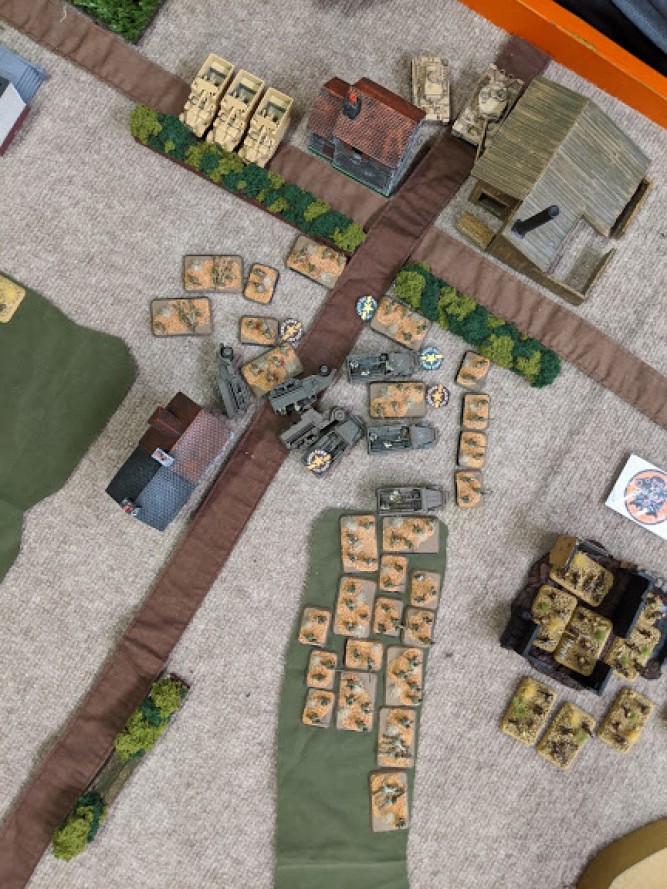 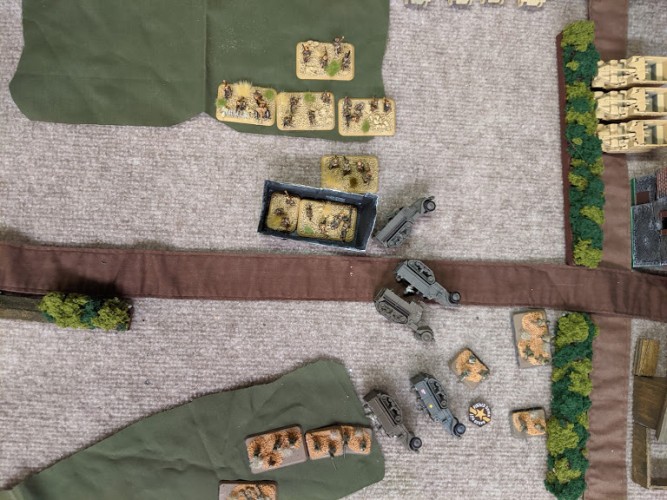 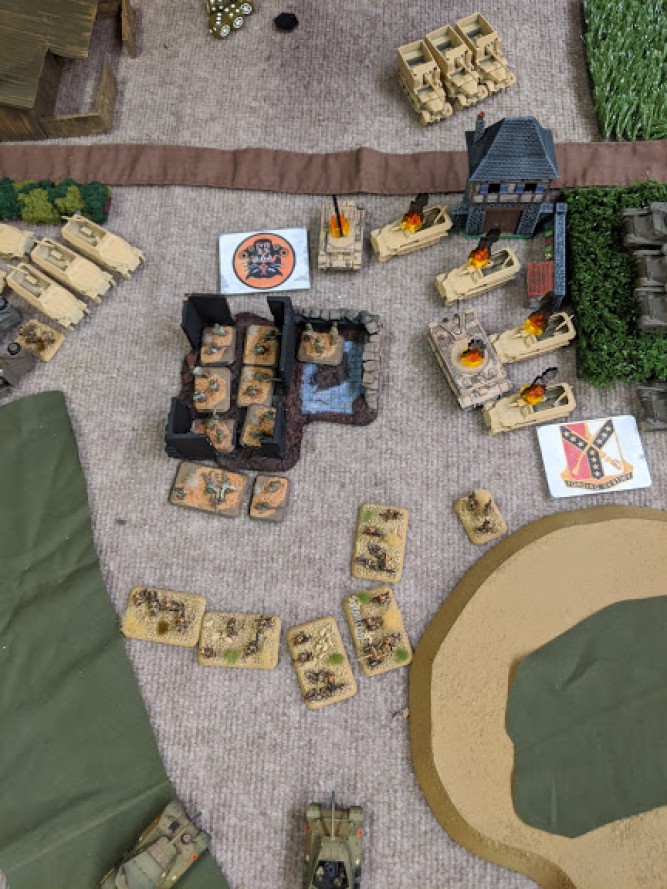 Push the Germans out! 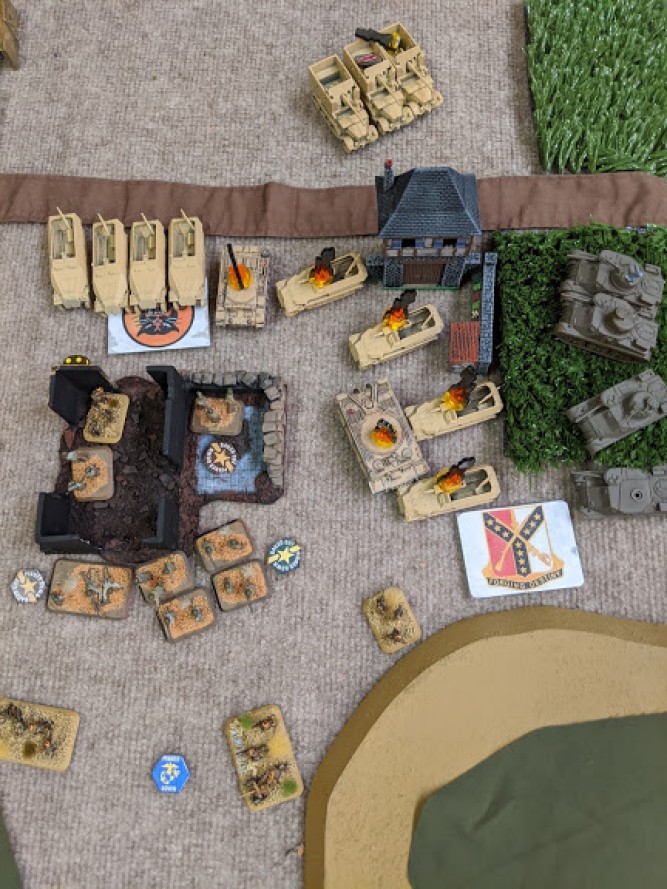 Fighting till the bitter end.

ScotaFest 2019 would be my 4th MidWar tournament since I started playing FoW again since the v4 launch. This is the 2nd time I've played a German force, and in hindsight both times, I feel like I'm not happy with the state of my force. When I played a German armored force, I found the armor too squishy and too expensive. When I played a German panzergrenadier force, I found my force too immobile and allowed my opponent to dictate the battles initiative. For example, if I was playing my German armored force against Geoff's Armored Rifles in the same battle, I don't think I could have cleared the objective before turn 6. There is clearly a meta game that I'm not yet grasping in FoW. Every time I play my Germans, I look at the Stormtrooper rule, and how rarely I use the ability. Across three matches, I used it ONCE. Yet, there has to be a "cost" associated with it that I'm paying for all of my troops. I've long wondered if this was the driving factor that forces me to always dislike any German force I build.

Going forward, I've got a Fallschrimjager force in mind. Is this going to be the foundation that allows me to finally field a German force that I'm happy to bring to the table. FJ with an allied formation of Italian M14/41 tanks may finally give me what I want on the table.

1 Person Has Recommended Alyksandyr For a Commendation