ScotaFest has been running for 9 years now, and from what I've heard from veteran players in the Atlanta/Greenville/Charlotte/Asheville/Columbia area, its one of the best tournaments to attend. This would be my 3rd ScotaFest and I was determined to "be a tougher out" this time around. Therefore, I started looking at list building around June and quickly settled on a Panzergrenadier force.
One of the biggest frustrations I have faced in a tournament was always what to leave in reserve, and after that decision was made, how I am going to "weather the storm" until my full force is on the table. I decided the best thing to do would be to develop my list around ONE reserve unit. A Tiger with an escort tank and the Rapid Fire command card would cost 45 points, one more than the required reserves of 44 points. From here, it was about building a list that could hold or attack until the Tiger arrives. Two full strength platoons of Panzergrenadiers, one full strength section of Stummels, one full strength section of armored mortars, and 3 PaK 38's would make an excellent hard to break formation. I felt I was a bit light on AT, so 10 points for 3x Diana's would be perfect. The list was set.

My first round opponent was Kevin. He's one of the best players in the local area, so without question I was excited for the match. My goal was to "be a tough out" and stayed committed to the goal. His list was an American Stuart force, supported by Lee's and M10's. 16 Stuarts, 4 Lee's, and 4 M10's. This was going to be difficult. My limited AT assets would have to work hard. Hopefully, luck would be on my side.

Luck? It started against me before a single die was rolled. With an infantry force against light tanks, I pull the table without long range shooting lanes. The Stuart tanks would be able to maneuver in and around all of the tall, area terrain. It was going to be as knife fight to use my opponents terminology. He also added, he likes knife fights.

Next game battle stances. I spent 6 months working on a force to "defend" with. I was 100% certain that my opponent, with his ALL ARMOR list, would chose attack. I picked defend, and saw him follow suit. The die roll produced a "Free For All".

"Never interrupt your enemy when he is making a mistake." -Napoleon Bonaparte

6 months planning a list around reserves, and before a single unit gets deployed, Kevin had already started to school me on the lessons of war. 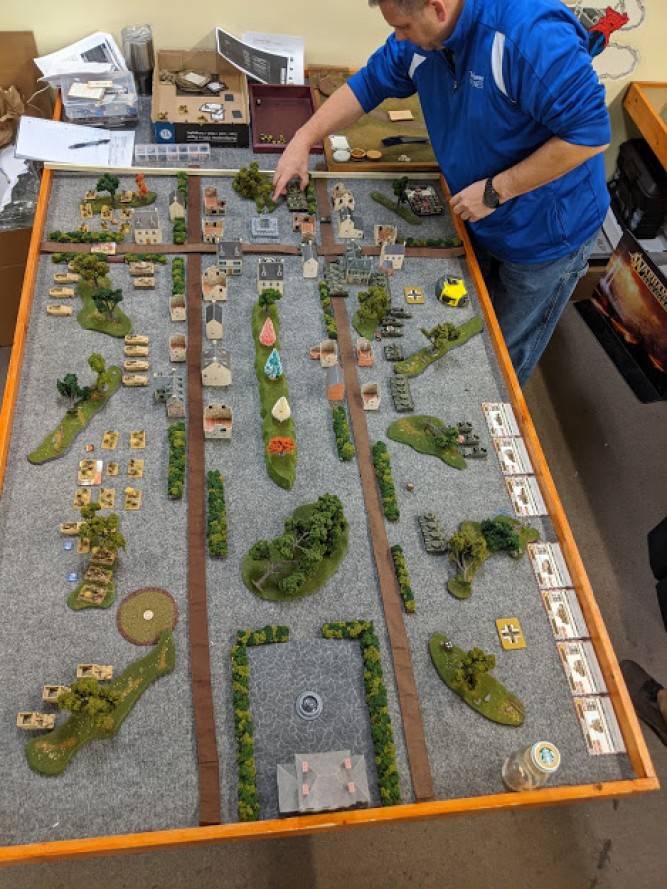 Kevin won the roll to go first, which combined with the heavy terrain, enabled him to seize the middle of the field. His positioning was flawless. The large ridge in the center of the table allowed his Stuarts to hide behind the ridge. From here, he could cross the ridge for a direct frontal assault, or pressure either of the two flanks. The M10's and Lee's moved up the left flank, and a final platoon of Stuarts held on the right flank.

On my first turn, I was conflicted on what to do. Honestly, I was envious of his position on the table. I felt that his force was MORE mobile than mine, therefore, he would have the imitative. Given that, I felt that if I "held", I would simply allow him to dictate to me how the battle would be played. However, if I blitzed forward with my Stummels, moved forward and claimed the ridge, I could engage the hit on 3+ Stuarts with AT 9 3+ FP guns. Even if I connected on 3 of 4, reducing a Stuart unit on the first turn from 5 to 3 would be a minor victory. They would be exposed, but they'd be concealed, needing 5's on return fire. I convinced myself that to win, I'd need some luck anyway, so I pushed the Stummels forward.

"Opportunities multiply as they are seized." - Sun Tzu

They made the blitz roll, 3 of 4 made the cross check, and 3 of 3 connected with their target. 3 of 3 penetrated the enemy armor, but my 3+ FP checks only scored one kill. My aggression didn't achieve the desired outcome. I yielded the turn.

His 2nd turn, the speed of the Stuarts was on display. 5 of the Stuarts were able to flank around the ridge to engage the flanks of the Stummels. The company HQ moved onto the ridge, and 3 of the 5 that I engaged stood and opened fire. I faced 20 rounds of 37mm return fire, leaving all of the Stummels in flames. His M10's pushed forward along the right flank and his Lee's continued to seek shelter in the thick of the village

My 2nd turn found myself with two AT assets on the wrong side of a one flank war, but the Tiger was well positioned. I didn't like engaging Stuarts with the 88, but I couldn't hide and wait for a better target. The blitz roll was made, 5 shots rang out, 3 shots connected and 3 shots penetrated. Yet again, my firepower checks betrayed me. 1 of 3 Stuarts were left burning. Luck was NOT going my way.

"In a man-to-man fight, the winner is he who has one more round in his magazine." - Erwin Rommel 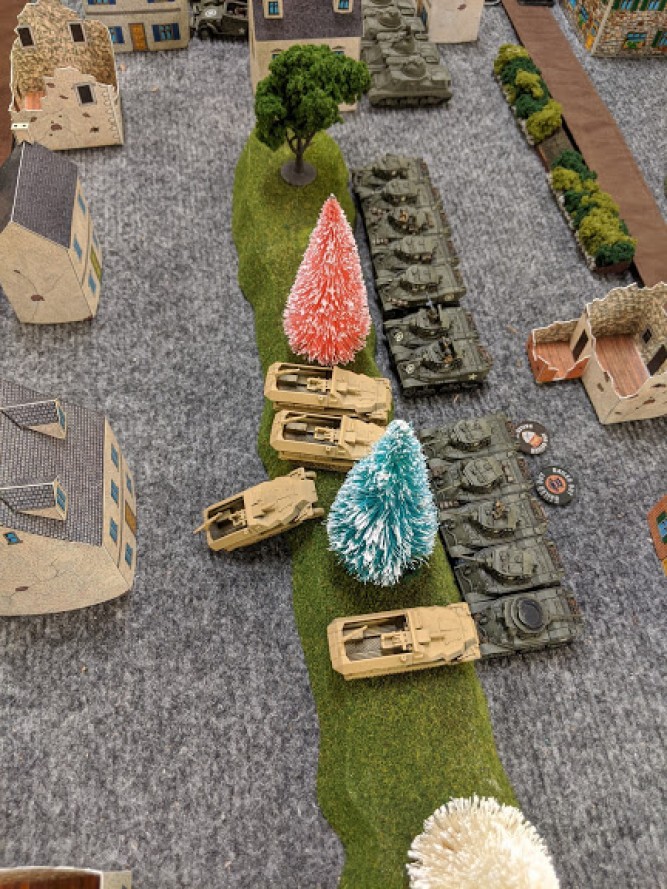 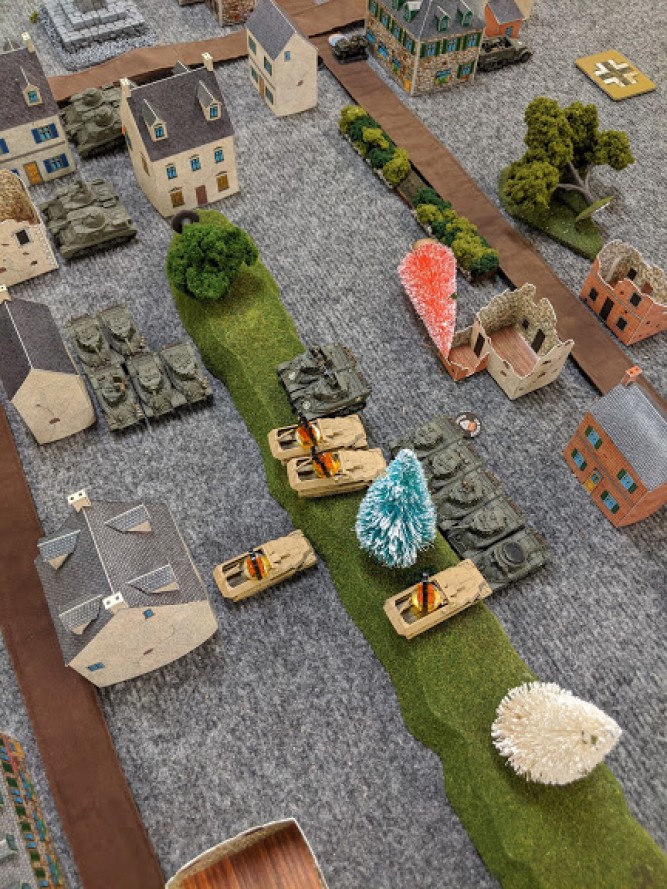 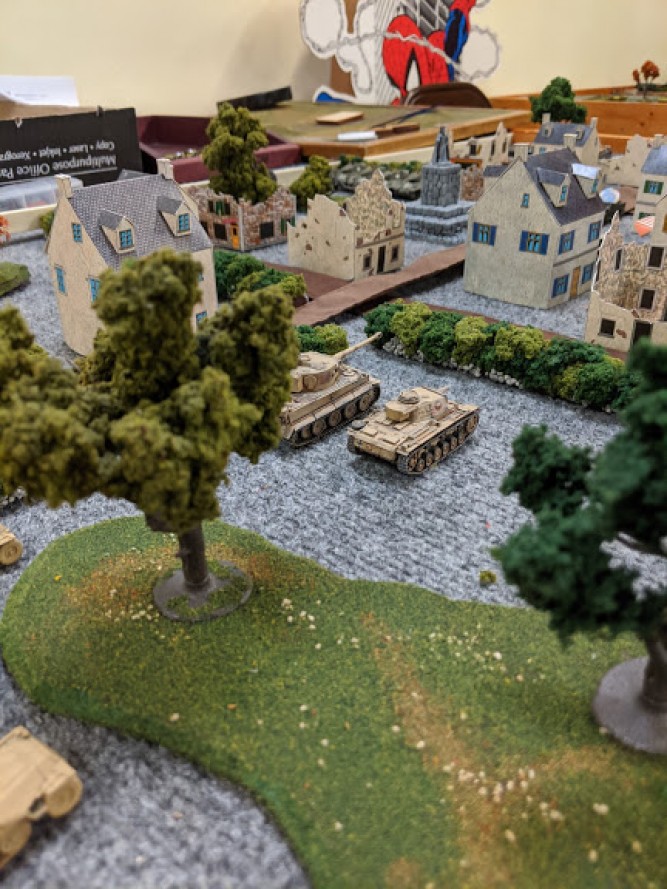 The Tiger lays waiting to pounce 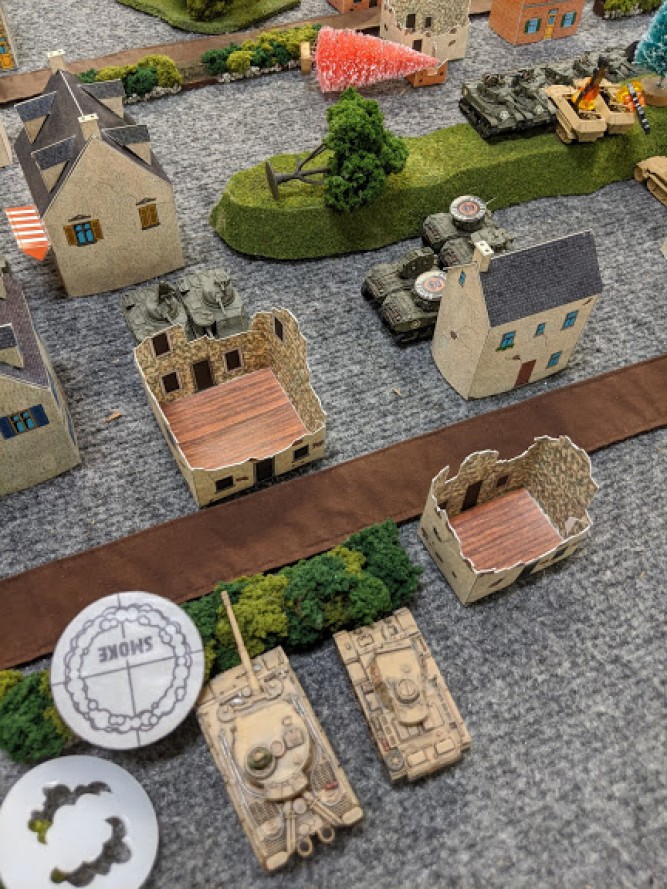 The Tiger engages, but over penetrates the thin armor of the Stuarts.

A 33% success rate on an expected 66% success rate had me laughing at the irony of the best laid plans. However, I did manage to shoot and scoot the Tiger at the end of the 2nd, enabling to return to safety.

On his third turn, he pushed his M10's fully foward on the left flank, and engaged the defending Panzergrenadiers with 50 cals. The HQ unit, stationary on the hill, called in some artillery fire on some Panzergrenadiers. The Lee's continued their cautious approach.

My third turn saw an opportunity. The tiger looked to continue blitz and shoot and scoot, however, it failed on the blitz roll. I was forced to engage, even though it would expose it to return fire from M10's and Lee's. I engaged and didn't connect. My Panzergrenadiers had not moved or fired all game. They were hidden in the woods, and within assault range. I had a chance to engage open topped tanks without taking defensive fire. I laid down some smoke to block out the recon teams and launched the assault. I bailed one, then my opponent failed the counter attack roll. They broke off, returned behind the safety of the hedge, but there were three left.

“In one short sentence, it is captaincy that counts” - Bernard Montgomery

He quickly pounced on the exposed tiger. He could bring 3 M10's and 4 Lee's onto the tiger, and placed some Stuarts into the fray as well. He chose his fire in the correct order, bringing the Stuarts first to take out the Panzer III, then focused the fire on the Tiger. It didn't take long. The 2nd shot from a M10 left it in flames. The game was all but over.

"There is no smoke without fire" - Georgy Zhukov

I had one chance left to snatch victory from the jaws of defeat. If I moved the Diana's forward, I could engage the Stuarts defending the objective. I had to make the cross checks.
Diana's Vor!
Dice clatter in the tray.
Dice show 2, 2, and 1.
I laughed loudly as one can only do in such a time. The dice, were not on my side. The game was over. Sure, it wouldn't offically be over for another turn, but I knew it was done now. My Hail Mary pass was intercepted.

“A general is just as good or just as bad as the troops under his command make him.” - Douglas MacArthur 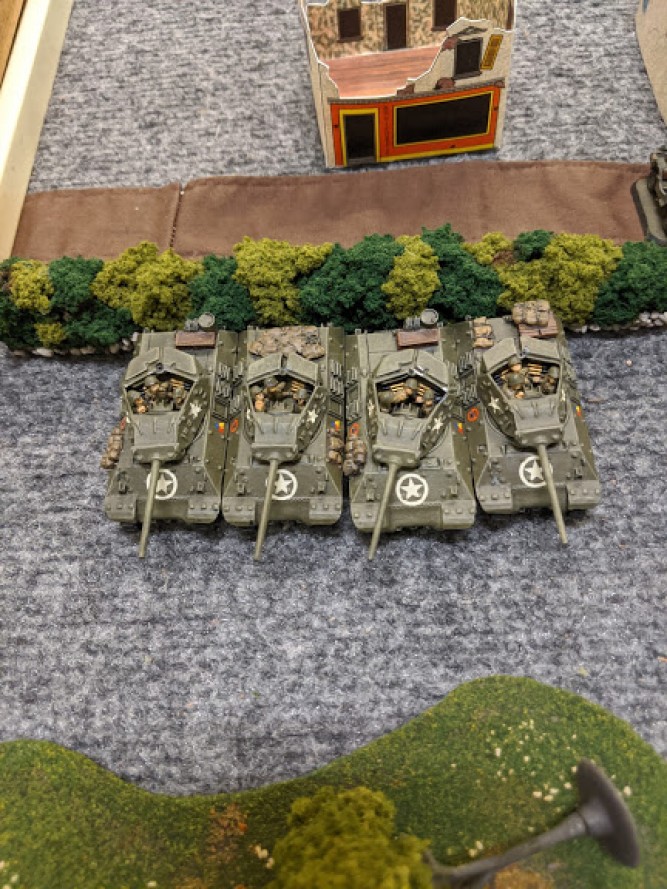 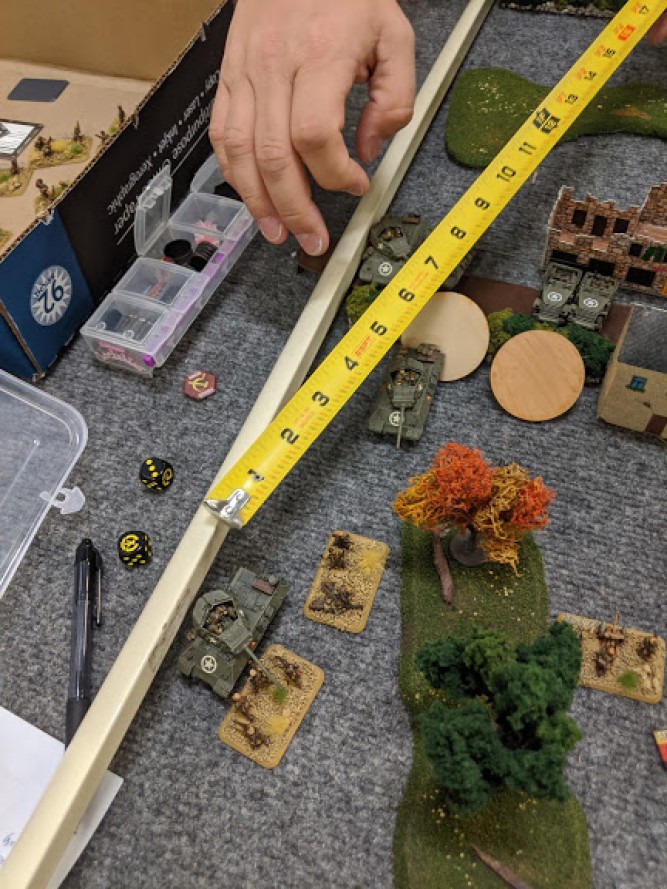 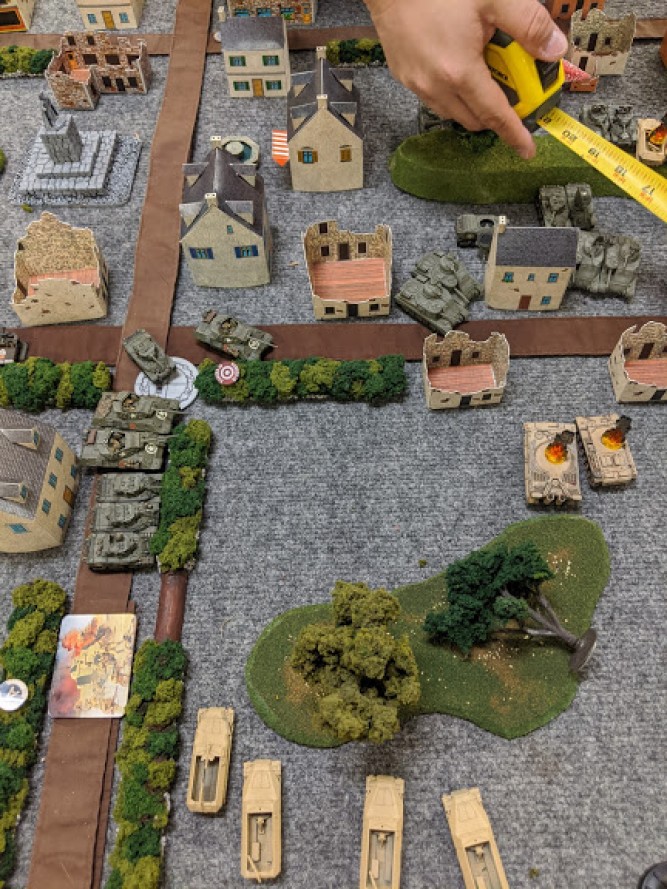 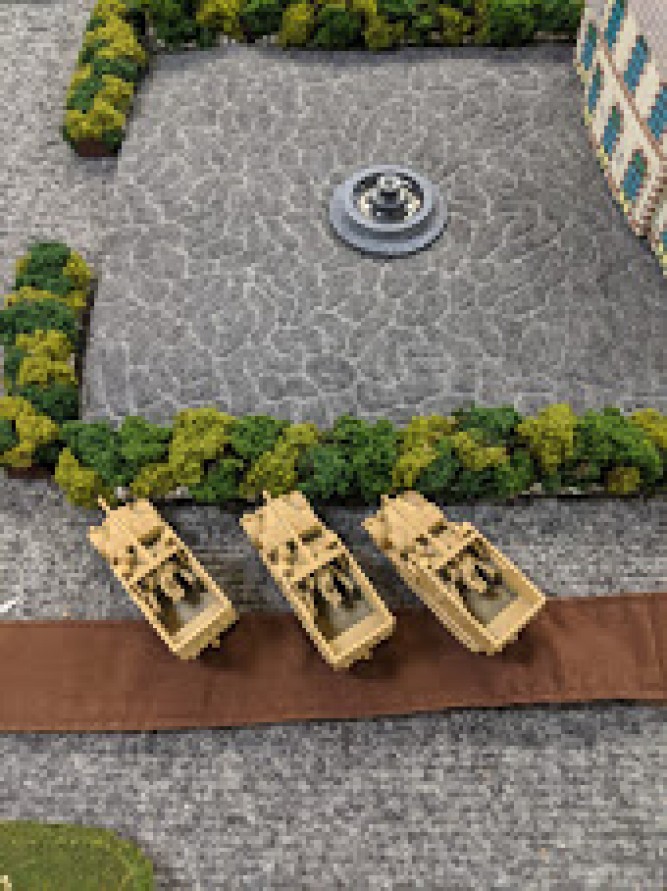 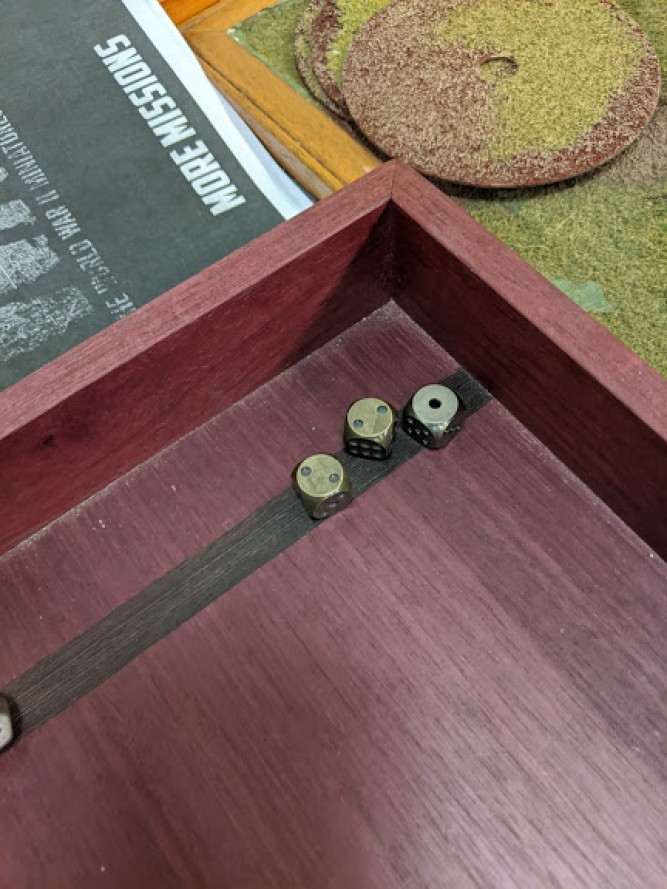 I knew the battle was lost. I could not hope to hold him off the objective with a single Panzergrenadier platoon. Improvised AT weapons are just not reliable enough. Sooner or later, the counter attack would fail, and victory would be his.

What happened next was a lesson in the surgery of Flames of War. Kevin went in a removed my contesting forces with scientific precision. He had an overwhelming superiority in the area. He took out the Armored Mortars, then turned his attention to the Panzergrenadiers. It only took one tank assault to clear the objective. Victory was his. 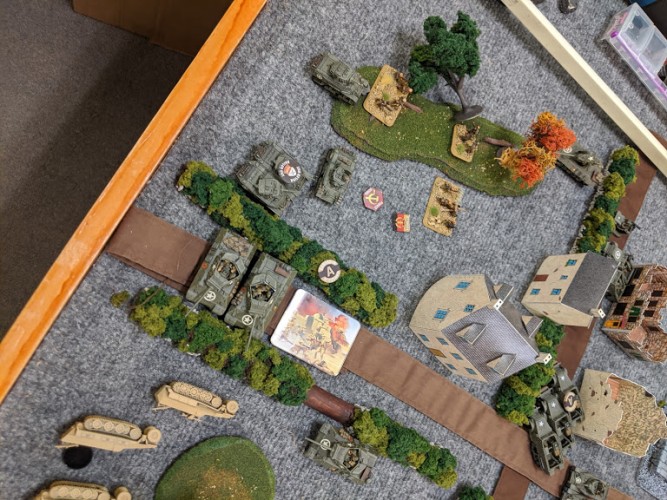 After the match was over, Kevin stated that he "baited" me, and I took every piece of bait. I responded that while there was a trap set, I didn't have the force to allow him to allow him to dictate the terms of the battle. I had to attempt an offensive action to seize the initiative. However, even had I scored 100% success rate on my first 6 hits, I don't think it would have mattered.

I then asked him why he selected "defend" as his stance at the start. He said, on a board like this, he couldn't allow me to get minefields. He said he felt certain that I would have selected defend, so knowing a defend v defend match was not going to produce deep reserves and create no minefields, it was an easy choice.

This is the kind of attention to detail in Flames of War that I don't yet have. From the moment he saw my list, he knew what to do. He said I did apply some pressure that caused some minor worries. While I appreciated the comments and will ponder this match for the next 6 months, I return to the goal. Was I an easy out, or a tough out. Sadly, with the evidence presented, I'm left with one conclusion. I was taken to school by an old school master.

1 Person Has Recommended Alyksandyr For a Commendation