The utter failure of Soviet Generals was very apparent in this battle royale. The battle was long, bloody, and fun.

Due to a mix up of mission sheets, the battle took place in Argentan, but was played using the Falaise table setup.

Overall the Soviet forces performed very well given the small frontage for deployment. In true Napoleonic style, the Red Army, marched forward at a slow and stead pace. and rained hell down on the German entrenched position in the corner of the table. The only saving grace the could have allowed a soviet victory was the Strategic withdrawal of German forces starting on turn 3. Even though the Germans were significantly outnumbered, many errors were made in this mission and and the Soviet forces succumbed to the bloodbath that the Germans shelled out. Ultimately, the soviets were forced off the objective in the final turn of the game due to a failed assault and it cost the motherland her victory.

This game was about the worst possible setup we have played as neither of us were using the same mission sheet, me Falaise and the Capt. Argentan. Capt. B also was using a borrowed army due to a short notice and didn’t realize the the force was a 2 formation list and and neither of us realized until it was too late. Many things may have changed the tide of war to soviets favor, but, C’est la vie. Great fun was had and we both really had fun slaughtering and getting slaughtered.

Soviet not mourning their armor losses. 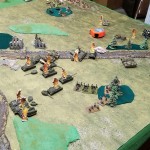 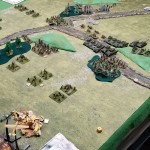 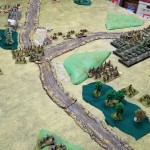 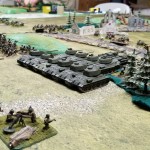 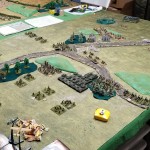