This encounter started as an exercise by the Soviet Army to test their mettle against the German encampment. The latest Intelligence suggested that there was a small contingent of German forces to the North and a motor rifle battalion was dispatched to investigate. Upon further discovery, the early reconnaissance was mostly correct. In the hills to the north of Argentan lie a German detachment holding a strategically important mountain pass entrance.

As the Soviet forces advances on the enemy position they are met with three companies of infantry in foxholes ready to hold there position. In support of the infantry is a detachment of Panzer IV, AA guns, and AT guns. The German forces put up a hell of a fight in their foxholes giving the soviets a run for their money with fire power rolls. Fortunately, the Germans were unable to kill both aircraft, though one did go down, and as a result the aircraft did keep the guns and some infantry pinned for most of the game. The 120mm mortars railed cover upon the unsuspecting Germans and kept the rest of the German boots pinned also for most of the game.

As the artillery kept the German infantry busy and pinned, it allowed the T-34 support and SU-152’s to come around the left and right flank and knock out the German armor. Just in the nick of time too as the armor reserves came to play as the AT guns and 152’s moved in position to attack. The 45’s and 76’s made short work of one Panzer IV company and the T-34’s dispatched with extreme prejudice the other.

After the German armor was dealt with, the Soviet infantry made a heavy push forward to plug the gaps in the mountain passes and forced the German AA trucks and remaining infantry to engage outside of objective range. The German infantry was engaged with, assaulted, and ultimately broke from bad morale.

The Soviets successfully gained the objective at the top of turn 4 with almost no opposition remaining on the field. The German field commander was forced to retreat back to Berlin to face the Fuhrer. 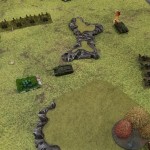 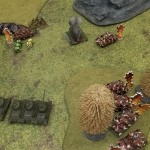 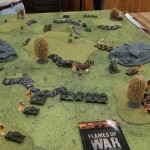 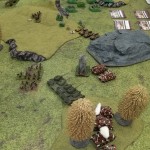 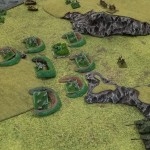 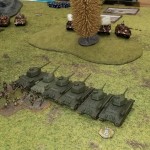 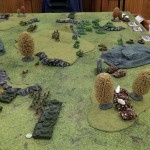 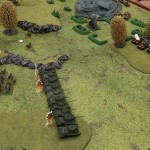 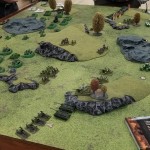 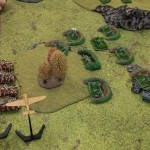 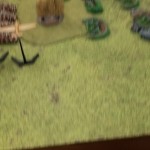