This battle will likely be my last against Bron. He was hopeful in getting the win, but alas, the dice were not in his favor. Again.

This battle started as a typical soviet deployment. Line em up and see what the first move brings. This time around, Bron decided to keep the bulk of his armor and AT guns in reserve. He deployed an infantry company on top of each objective with a third at center field. From the pictures you can see the armor off guarding his left flank. With a pair of short barrel 75mm half tracks on the right. My deployment was of course the center rectangle; great for turn one artillery.

As the allied player I took the first turn. Seeing that Bron did have much in the way of antitank on the table, I pushed my T-34 company straight up the center and kept them just out of range of the 2 mine fields that he had left. My HMG also took up station on the top of a him at field center and covered my advance. The two of the 3 infantry moved the left and the third moved to the right to cover anything that may have decided to move around over there.

At the end of my turn one, 2 infantry companies were pinned as a result of mortar fire, HMG’s, and aircraft. The aircraft showing up on turn one took care of 1 of the half tracks and bailed the other. Bron, of course, got back in and stuck around. The mines were spaced apart just enough that I was able to squeeze an infantry stand between and stay out of range. That of course meant a T-34 could also.

Bron countered my advance with laying down fire on the HMG’s and T-34’s sending some of my fierce force to their grave. I was fortunate, in that, I did not lose enough to take any last stand.

Top of turn 2 to the allies met with favorable results to the Soviet army. I advanced the center infantry and T-34’s right to an objective and killed off the last of damaged infantry unit. Since there was nothing in range of the objective to contest, the game was over at the end of the allied turn 2.

It was too bad, that Bron didn’t have any artillery of anti tank on the field to slow my advance. He also did not get any of his reserves as he never got the chance. I rolled success for both of mine.

Over all, while it was a win for the allies, it was not all that fulfilling and he didn’t want to continue playing just to see what happened. It took longer to setup and get ready than the actual game did. 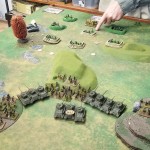 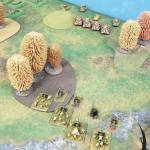 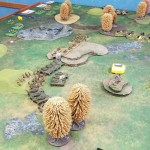