This was my first game of Tanks played against a friend, Kevin, who doesn’t play Flames much. We pitted Soviet 3x T-34’s and an SU-100 against German Panther, Stug, Panzer IV, and Tiger 1.

The objective were directly across the table and in turn soviet fashion, I rushed my T-34’s aroudn the factory at table center and grabbed 3 point all at the same time. The Germans tried to keep me off the objective, and did advance the Stug over to collect a point on my side, but it was not enough points in his Favor to collect the win. the Germans took up a defensive position in the trees and used the cover and my fast advance to their advantage in teh number of defense dice rolled. It was hard for me to do any damage, but I realized, that I just had to survive the turn sitting on the objective, and I did.

The game took about 45 minutes and we had a good time. I bought the tanks starter set as a result. Just something different to play. Might as well use all the tanks, tight? 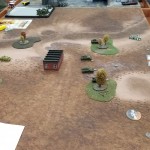 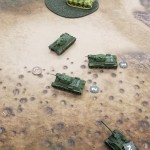 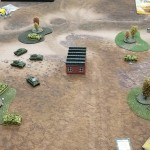