Prologue
The Company of men aboard the transport ship found themselves huddled on the deck. The infantry transport ship (part of Assault Group O) listed from side to side as the old man stared at the men (some of them boys) assembled in front of him.
The Top ordered the men to attention and the Commander read from a sheet of paper held out in front of him. “Commander Allied Expeditionary Force, General Eisenhower. Soldiers, Sailors, and Airmen of the Allied Expeditionary Force! You are about to embark upon the Great Crusade, toward which we have striven these many months. The eyes of the world are upon you. The hopes and prayers of liberty-loving people everywhere march with you. In company with our brave Allies and brothers-in-arms on other Fronts, you will bring about the destruction of the German war machine, the elimination of Nazi tyranny over the oppressed peoples of Europe, and security for ourselves in a free world…”
The boy from Kansas listened to the esteemed words of the decorated commander from Kansas sink into his head as he tried to clear the lump from his throat. The idea of running up a beach towards machine guns was his idea of FUBAR.
Battle Plan
Storm the beaches and secure the objective. Nice and easy…
The Game
The landing was a success, followed by a dramatic but ultimately fruitless naval bombardment.
The first few turns saw the Rangers “Lead the Way”, climbing over the seawall and advancing forward towards the objectives and into machinegun fire. Despite a few repeated attempts the Sherman Assault Guns found disembarking and traversing across the sand difficult going. As the US forces were gathering-en-mass on the beach.
The one effective unit was the mortar sections that ranged in and repeatedly bombarded a unit of beach defenders down to last stand checks.
During the midpoint of the game, German Panzer IVs rolled down the country roads into firing positions opposite the Sherman’s whittling them down to fiery hulks of their former selves. But not before the assault guns destroyed a few nests and forced the heads down on multiple beach defenders.
With the overwhelming fire, American forces dug themselves in around their objectives in anticipation of the German counterattack. And a counterattack occurred as the now lonely beach assaulters faced down the Panzer IVs and after a few losses forced the Germans to withdraw.
– Geoff 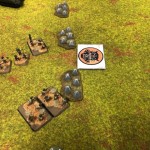 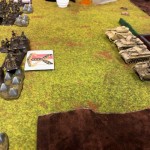 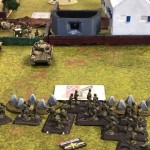 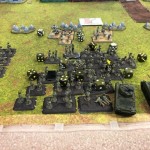 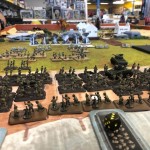 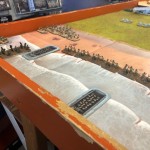