The Eyes of the World Are Upon You

The Eyes of the World are Upon You

Prologue
The Company of men aboard the transport ship found themselves huddled on the deck. The infantry transport ship (part of Assault Group O) listed from side to side as the old man stared at the men (some of them boys) assembled in front of him.
The Top ordered the men to attention and the Commander read from a sheet of paper held out in front of him. “Commander Allied Expeditionary Force, General Eisenhower. Soldiers, Sailors, and Airmen of the Allied Expeditionary Force! You are about to embark upon the Great Crusade, toward which we have striven these many months. The eyes of the world are upon you. The hopes and prayers of liberty-loving people everywhere march with you. In company with our brave Allies and brothers-in-arms on other Fronts, you will bring about the destruction of the German war machine, the elimination of Nazi tyranny over the oppressed peoples of Europe, and security for ourselves in a free world…”
The veterans of the 1st Division listened to the esteemed words of the decorated commander from Kansas sink into their heads as they once again prepared to battle their hardened foe. They’ve ran into a hail of bullets before, but this…, well the platoon sergeant said it best, FUBAR.
Battle Plan
Storm the beaches and secure the objective.
The Game
The landing was a slow slog up machinegun infested alleys covered with barbed wire and minefields.
The first few turns saw the Rangers “Lead the Way”, climbing over the seawall and advancing forward towards the objectives and into machinegun fire. The veteran men of the 1st ID followed and before long slow progress was being made up the far left of the beach landing. The mortars, determined to keep a steady and unrelenting arc of fire over the heads of the assaulting infantry.
Once the rangers and infantry gained an inch, the victory was secured. Boat after boat landed Americans determined to carry the torch forward like the Olympians of old.
A few successful mortar rounds eliminated the commanders of the German force adding to the difficulty of facing more hordes of determined infantry storming the beaches.
The tale tell sound of Panzers alerted the Americans to the presence of 4 Panzer IVs approaching their position. With the bazooka squads taken out by machinegun fire they had to face the threat with fierce determination and hand grenades. An audacious task… but these were Rangers. HIGHLY MOTIVATED was a nickname that would stick during their assaults up the beachhead. Luckily for them some rounds from a destroyer parked off the beach caused a Panzer IV crew to abandon their tank, and never return.
A failed push up the right flank resulted in manpower and time wasted. The men decided to redouble their efforts up the now exposed and steadily retreating left flank. A repeated series of assault saw the left flank withering under the tenacity of rangers LEADING THE WAY!
The Panzer IVs pushed forward only to be faced by two bazooka rounds that took out the two remaining Panzers. Left objective secured and Americans on the continent! 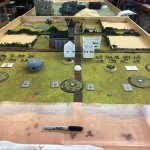 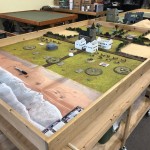 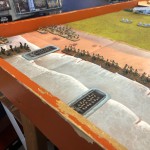