Running the Gaunlet: An Encounter against 88s and Panzers

First game at Flamescon 2019. My Churchill Italy Squadron versus Eddie’s Panzer Company. We both chose attack and rolled up Encounter.
I ended up as the first player but obsessing over mortar placement meant I forgot to recce first. This allowed Eddie to recce forward with his attack on my right hand side, denying me the chance of choosing which flank to attack and handing it to Eddie. An almost fatal mistake except that Eddie chose to advance on the open side of the battlefield on my right hand side. Probably trusting in his big 4 tank panzer platoons to do the job.
I advanced slowly on my left hand side through cover as my Churchills and Shermans still failed too many of their cross checks and I was facing 6 Panzers, 4 88s and 2 Pumas when I had to break cover. Via a combination of bombardments, smoke and direct fire I eventually managed to dig out and remove the 4 88s, but had not even scratched the paint of the Panzers or Pumas who had taken out a Churchill platoon.
On my right the arriving Panzers supported by a beach defence company charged my infantry defending my objective and my centrally located mortars. In the centre my better morale told in the assault. On the right my reserve M10s and Shermans arrived to help save the day even though I had lost a couple of platoons from my infantry formation. Eddie’s Panzers failed to save my return fire and then motivation to stick around.
This afforded me the opportunity to switch my tank attack from the centre left to the right hand side of the battlefield, brutally machine gunning the beach defence company before claiming the right hand objective despite being down to one effective tank in the Sherman platoon that claimed it.
A close run thing! 6:3 to the British.
Pictures show Eddie’s Panzer company on review, and the carnage on the two sides of the battlefield at the end of the game. 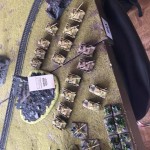 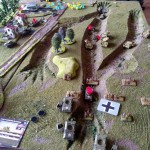 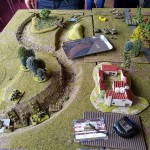 1 Person Has Recommended Brent For a Commendation