My opponent is known as Fancy Joe for a reason. He is the best-dressed FOW player in the country, and he loves his British Paras. Since we decided on the Orne River Bridges mission, he built an American Paratrooper army and proxied in the British paras. I built a Panzergrenadier force, imagining them to be a company of the 21st Panzer Division that was opposing the British paras near the bridges.
The Para drop was for the most part fine, although one infantry platoon started in a back corner, and failed to unpin for a time. The six-pounder platoon crashed though, and lost one team out of four.
The Nebelwerfers ranged in on the enemy, but I was only able to knock off two teams utilizing the rerolls on misses. I failed to unpin one of the two infantry platoons, although the company commanders rerolls were well spent on getting the OP remounted. Turns 2-3 remained at night, and combined with a smoke barrage by my mortar section, I was able to get the StuHs up into position to assault the paras by Turn 3. The first assault was successful in pushing the enemy back towards the objective, but I decided to consolidate backwards to avoid the six-pounders. The German infantry moved in for an assault on Turn 4, and I made a critical mistake in assaulting with the StuHs first. Had the infantry assaulted the red-roofed building first, they would have cleared out the enemy PIAT. The StUH assault failed due to some sharp shooting from the six-pounder, but it needn’t have even happened. With all three StuHs dead, it came down to a Turn 5 assault by the German infantry into the red-roofed building again. We nicknamed it “Peter’s Building”. The fighting was vicious and fierce, but ended with the near-complete destruction of the German infantry platoon. Although the British tommies also took heavy casualties, they were still holding the objective with no enemy forces even close to the 8′ described in the Scenario Victory Conditions. We called it an Allied 8-1 victory.
Brian Reid 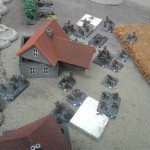 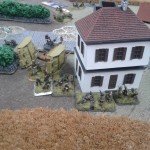 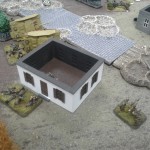 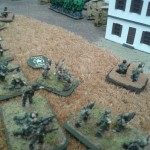 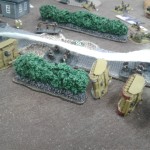 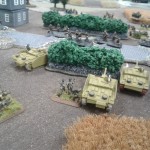 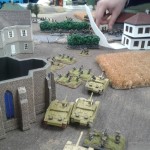 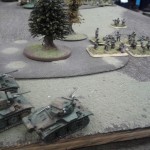 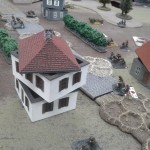 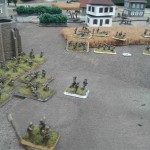 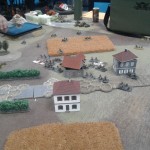