US 4th Armored vs German Greyhound

Ok, so first off, although I’m registered as a German player, I played the US side in this game, and although I tried my best, the Germans won 8-1 in this one. Now that’s out of the way, I’ll get on with the report.
The Germans fielded two formations, the Ost battalion of Ukrainians in German service, and a Greyhound company of Panzer IVs. They dug in their infantry around both objectives, a fuel dump suspiciously close to the French village, and another on a hilltop. The larger platoon of 5 Panzers were held in ambush. I decided on which objective to head for, and massed my Shermans and the mounted ARP on the left-hand flank. Recognizing the ambush was likely to spring forth from the bocage, I advanced all the Shermans forward to just in front of the road. The ARP flanked left, approaching through another field. The mortars and 105 Shermans pinned the German infantry surrounding the objective. Joe popped the ambush of five tanks, and managed to kill two Shermans and bail another. I failed the remount, including the reroll, and then failed the Last Stand check. Boom, a platoon gone to a Panzer alpha strike. Well, I moved farther to the left, to get out of the line of fire, but found my Shermans were getting in each other’s way. I laid down a smoke barrage from the mortars, and moved a platoon of Shermans and the ARP in to assault on Turn 3. The Shermans led the way, and both Panzershrecks managed to miss! The Shermans drove back the German infantry and consolidated forward. In the next turn, I moved the ARP up to a flanking position in a bocage field. The 105 Shermans laid down their smoke barrage, and I sent the Shermans in to assault again. Unfortunately, the defensive fire killed a tank, and the reluctant German infantry managed to counterattack, and blew up the other two Shermans involved in the assault. Meanwhile the Panzer IVs crept their way forward, eventually taking up positions to threaten both of my artillery platoons. I shifted the Company commander and the remaining platoon of Shermans back to engage in a long-range duel with the Panzers. Over the course of three more turns, Joe took the American armor apart piece by piece. First to go where the 105mm Shermans, then the Company Commander, and finally the mortar platoon. When I failed the Last Stand check of the mortars, my formation was broken. Great job, Joe! 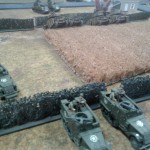 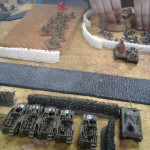 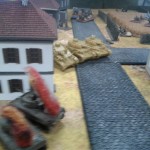 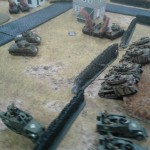 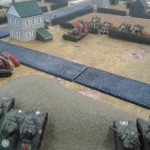 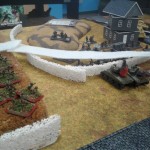 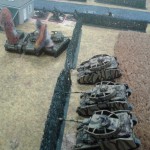 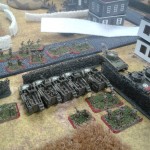 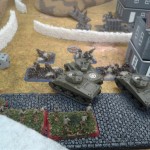 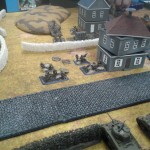 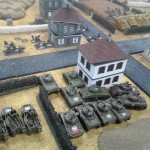 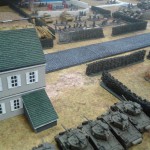 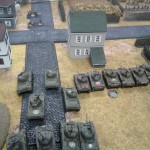 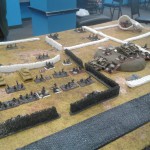 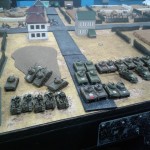 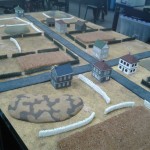 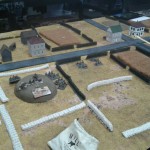