My son Noah has been excited to play Barkmann’s Corner, the scenario found in the Tanks! rulebook. Since we’ve played the Death in the Bocage scenario…to death, it seemed the thing to do. At 40 points, the Americans fielded two 75mm Shermans (we proxied 76mm tanks) while the Germans fielded a single Panther crewed by Ernst Barkmann. Now, I apologize for the low quality pictures. Due to the late hour, we had to play in our dimly lit basement. That reminds me, I’ve got to get some of those LED lights…but I digress.
Barkmann moved up into the woods to take advantage of its cover, while sniping at the Americans. I rolled unusually well this game, and scored three uncancelled hits on a Sherman in the second turn of the game! The Shermans moved out of the woods and behind a building, but I was able to scoot over enough to get a line on the damaged Sherman. Another round of shooting, and he was down to a single hit point!. At this point, Noah seemed to feel the urgency of the situation, and sought cover, at the expense of winning the game. Not everything went my way, though, the return fire from a Sherman took off one hit point from my Panther. Now from my experience there’s only one way for two Shermans to kill a Panther or Tiger. You’ve got to flank them, simultaneously, and roll well. Noah attempted to split his force, but the relentless Barkmann closed in on the damaged Sherman. At the cost of two more hit points lost, Barkmann successfully blew up a Sherman. Noah decided that shooting was the shortest way home, so the surviving Sherman took up a concealed position behind a building. Again, I traded a single hit point for three hits on the Sherman. The last two pictures show the final round of shooting, and it’s results. I took out the Sherman, while Noah took off another hit point off my Panther. Once again, I won by the skin of my teeth, with a single hitpoint left on my lone tank. Noah’s getting better at playing this game, and will probably be promoted to Flames of War pretty soon. A Battlefront gift of five KV-1s has got him planning his first Soviet army now.
Since this game doesn’t have any written objectives, I called it a 2-0 German victory. 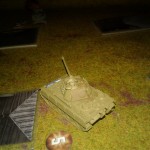 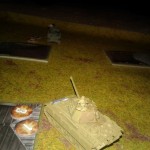 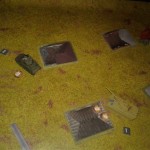 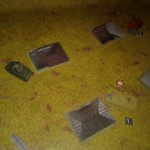 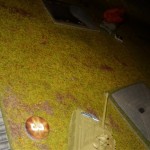 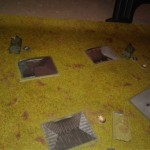 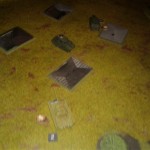 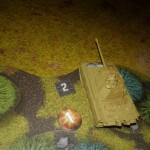 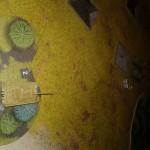 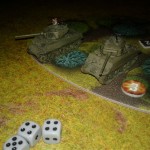 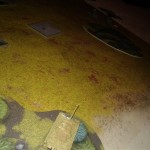 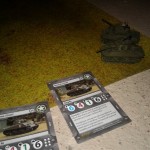 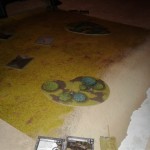 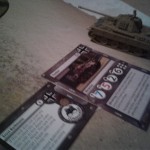