This week, we decided to try the Scrap Metal scenario. Since the printer was on the blink, we substituted tokens as the minefields. We figured an arrow in each direction, and you risked setting off the mines. Noah selected four Shermans, three of them the standard 75mm, and then into the 76mm put his favorite crew members, Lafayette Poole, Hog Oller, and the loader, whose name I forget. This was clearly his favorite tank, which spent most of the game zipping around the battlefield instead of shooting. I apologize for the lack of pictures, by the time we remembered to unlimber the phone, the game had been decided. My army list included two Tiger Is, and a Panther with Heinz Kramer as the gunner. We proxied a couple of T34s to be Shermans, since I couldn’t find my Sherman army.
First off, I used the firing lanes to my advantage to keep at least two of the Shermans from getting any shots in return for the first three or four turns. At the same time, my Tigers and Panthers focused their fire on single targets for the first two turns. Noah’s defense dice stayed hot for a while, as a result I nailed two different Shermans with two points of damage each. On the right hand flank, I picked up my first Victory Point in Turn 2 with my Tiger on the objective, while Poole zipped around behind the buildings to take a front-on shot on me in Turn 4. By then, I had picked up two victory points. The Shermans managed to get the left-hand Tiger down to only 2 hit points left. But the Tiger and Panther together blew up first one, and then the second Sherman contesting the other objective. Noah still had two live tanks, but they were divided from each other and no where near the objectives. I pointed out Noah’s flawed strategy to him, so that he won’t repeat that mistake again. With weaker tanks, he needed to overwhelm one target at a time. 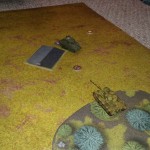 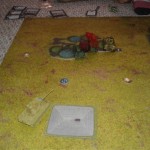