Sure enough, the Germans faced some tough American opponents. While my sons Noah and Drake built a list of 110 points, I had to make do with 100. The Americans had a Super Pershing with a super-gunner, a 76mm Sherman, and two Stuarts. The Germans fielded Kurt Knispel and Heinz Kramer in a Tiger, and Michael Wittmann and Bobbi Woll in another Tiger. This time we played with the normal terrain, instead of the bocage. When I rolled for the deployment, both Tigers rolled 1s, so they started in the top left corner behind the woods. Working in my favor, Noah and Drake didn’t work as well together as a team this time. On Turn 1, Drake rushed both of the Stuarts out in the open, I guess to threaten my flank as I moved forward. Instead, I stayed behind the woods to block the heavy US tanks shots while I took on the Stuarts. I took a hit point off the first Stuart, and blew the second one up. Drake withdrew the surviving Stuart to behind the buildings until late in the game. I then moved forward to get shots on the Pershing, as he got to roll seven (!) dice when shooting. It took two turns to brew him up, but then I was able to move onto the objective. Drake parked the 76mm Sherman on the objective as well, so I was only able to pick up one victory point. It took me two more turns to destroy the Sherman, who brewed up Knispel’s Tiger, previously damaged by the Super Pershing. In the end, on Turn 8, it was down to the lone Stuart against my damaged Michael Wittman Tiger. I had but two hit points left, and while I was able to destroy the Stuart, I was only able to roll three defense dice against his three shots. Drake rolled up two hits out of his three shots. It was down to the final roll, and I rolled a ‘4’ and ‘5’ to cancel both hits. I picked up the second victory point on Turn 8, having annihilated the enemy. But it was a close-run game again, and my boys were proud of the damage they inflicted on me. Pretty soon, we’ll have to upgrade to full-on Flames of War games in this household! 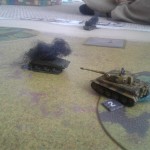 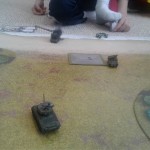 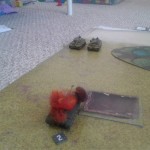 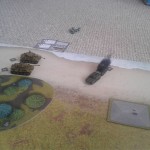 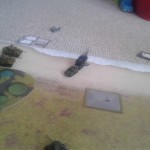 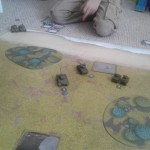 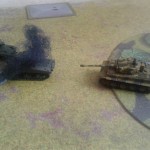