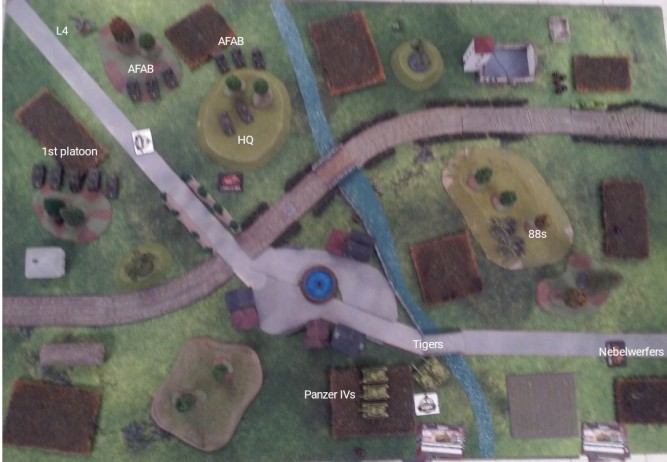 I placed my 1st platoon to cover the right flank, the HQ tanks to protect the objectives, and my two AFABs to cover the advance.

Thanks to a good roll and Fast Reserves both of my reserve tank platoons rolled on on round one. Steve who has only been playing a couple of weeks now got a little rattled by seeing 10 Shermans come charging across the table at him.

My right flank did some basic maneuvers to prevent his moving forward with his tanks, while the 2nd and 3rd platoon continued their charge. To give him a moment to catch up to what was going on I diverted one platoon to fire MGs on the 88s, and the other on the Nebelwerfers. I wound up losing a tank to the 88 return fire while the Tigers maneuvered behind the woods to defend the Nebelwerfers and interpose themselves near the objective. He started pushing on the right flank, but it was a slow push. I spent another round sitting still and firing the main guns on the Nebelwerfers and 88s...knocking out one of the 88s (with the other retreating in his turn). The Tigers continued around the left flank while a panzergrenadier platoon moved up to their position behind the woods. They started firing on the 2nd platoon knocking out a couple of tanks. 2nd moved between the hill the 88s had been on and the woods. 3rd platoon tried to cross the hill. The tigers and Panzer HQ knocked out or bailed all the tanks from 2nd platoon while the panzergrenadiers maneuvered to capture them. With only one tank from 3rd platoon shooting the defensive fire couldn't stop them and the wound up capturing 2nd platoon, a bailed tank from 3rd platoon, and another tank in the woods from 3rd that couldn't pass a cross check. That left just 2 tanks out of 10 remaining on the left flank.

1st platoon got knocked out by a platoon of Panzer IVs and another of StuGs. The German armor then maneuvered on the objectives and finished knocking out the Priests. The other Panzergrenadier platoon began maneuvering on the Sherman HQ.

The last two tanks from 3rd platoon charged his HQ Panzer IVs and took out his Commander. They were then destroyed by the Tigers and Panzer XO. The Panzergrenadiers assaulted the Sherman CO while the StuGs knocked out the XO. Game over with just the L4 carrying the story home. 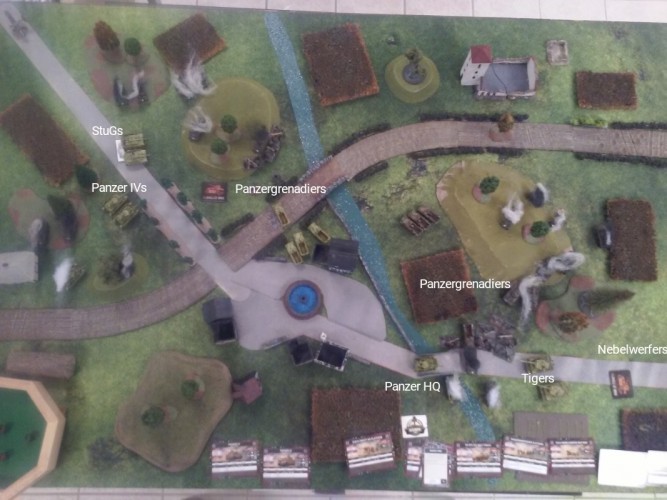