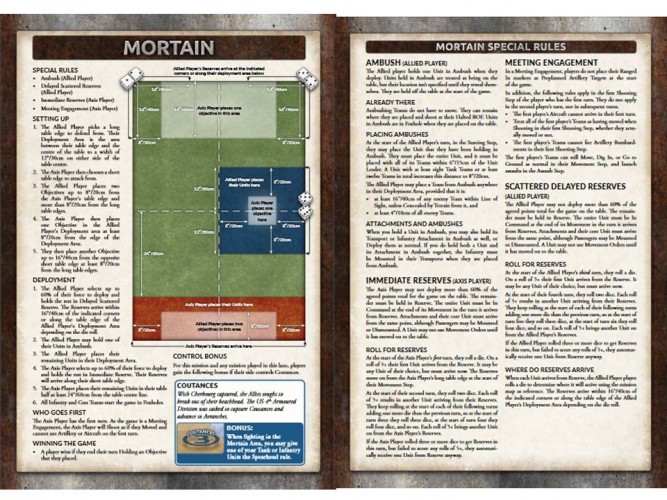 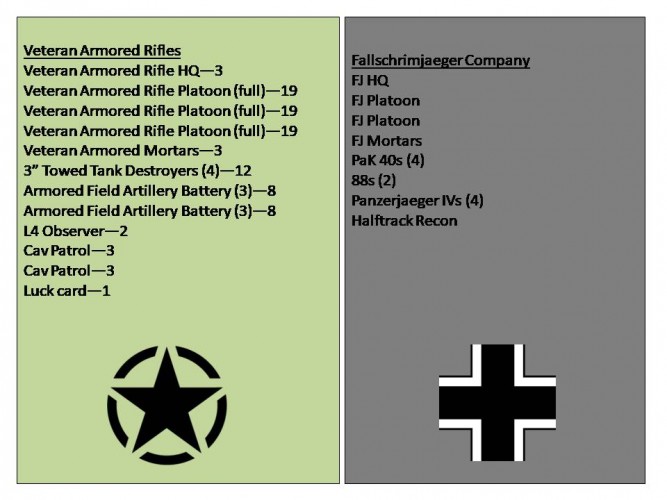 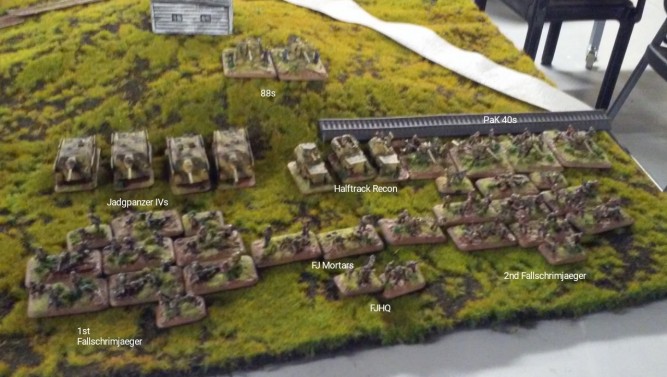 Having already played Vire twice this week, I offered my opponent the option of Mortain or Caen. Knowing that Mortain was Americans vs Germans Tom chose the historic option. That choice made him the attacker with a mostly infantry army versus my mobile Armored Rifles. I told him I'd be defending and offered him the opportunity to switch missions but he chose to continue with the mission. 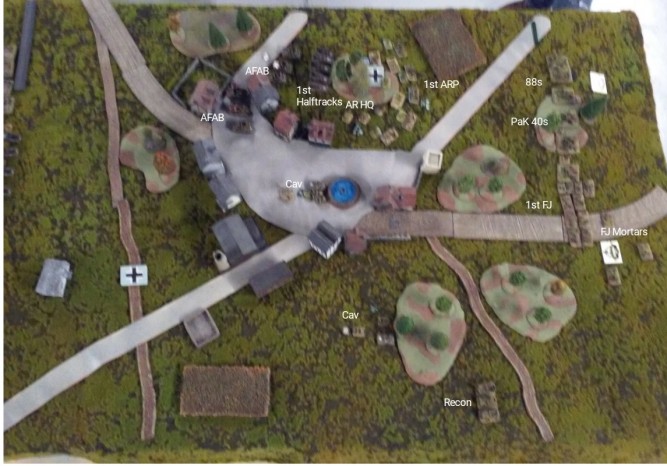 The town fountain was the center of the battlefield. I set up my first Platoon of Armored Rifles to protect the objective on the hill North of town with the halftracks on the hill behind. The HQs was placed just behind them where they could see into town to call for fire if necessary. One Cavalry patrol set up at the fountain, while another moved out cross country to monitor the potential for an advance down the South side of the battlefield. I also set up two Armored Field Artillery Batteries on the West side of town to provide fire support for the defense. In reserve I had placed two more platoons of Armored Rifle Platoons, and my Armored Mortars.

Tom placed his 88s and PaK40s to try and reduce my positions on the hill North of town. His mortars were placed along the road to add fire support, and his 1st platoon and HQ of FJs were placed near the road where they could advance into cover to push against the town objective. 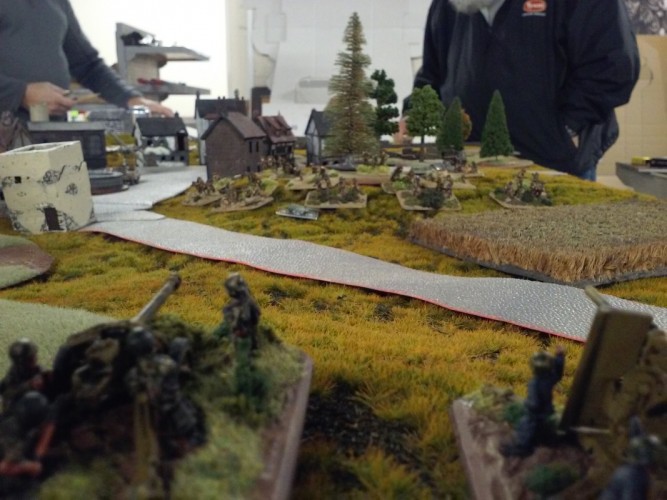 88s and PaK40s ready to fire on the hill 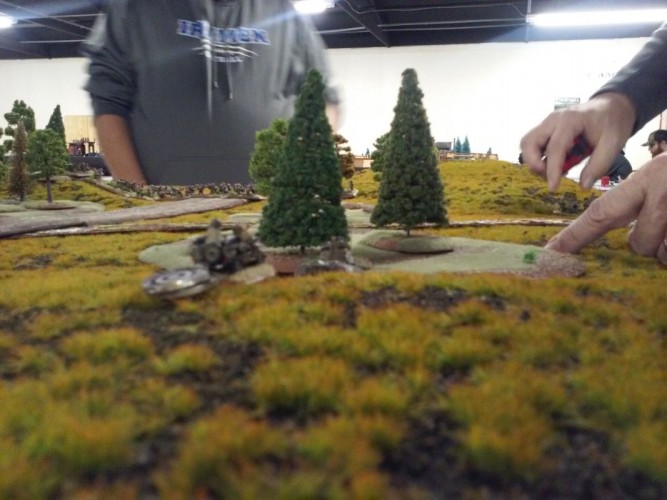 Tom moved his Reconnaissance forward and put my Cavalry squarely in his sights. His 1st platoon and HQ moved down the road into concealment of the woods. He opened up with all of his guns on the hilltop but was unable to do more than kill one team. 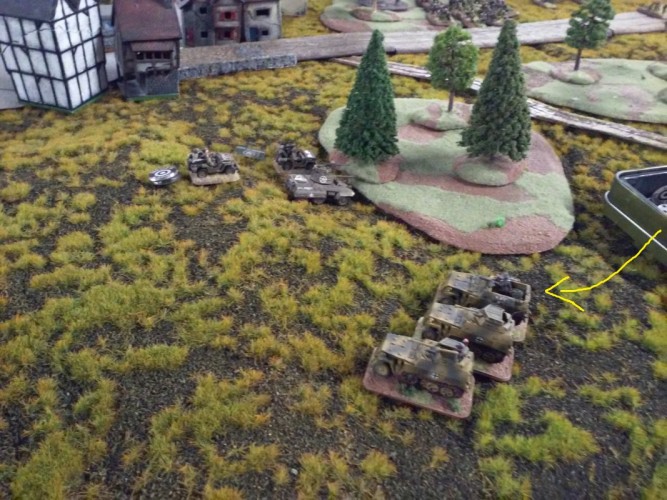 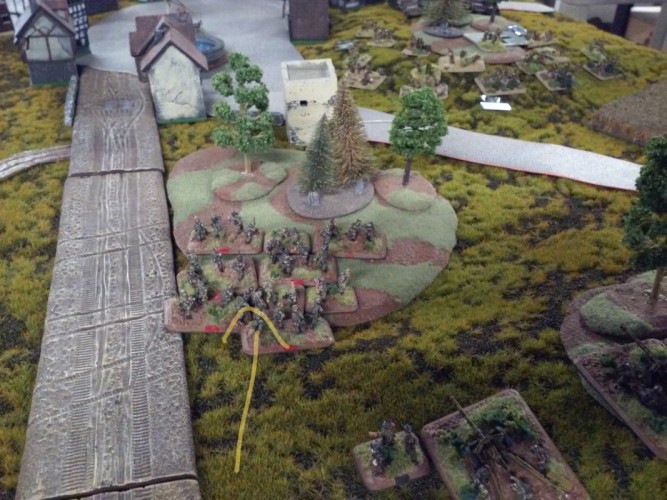 Our artillery and mortars began to pound the guns opening up on our positions. The L4 spotted the FJ moving out in the open and diverted a Field Artillery fire mission to try and knock them out of the fight. 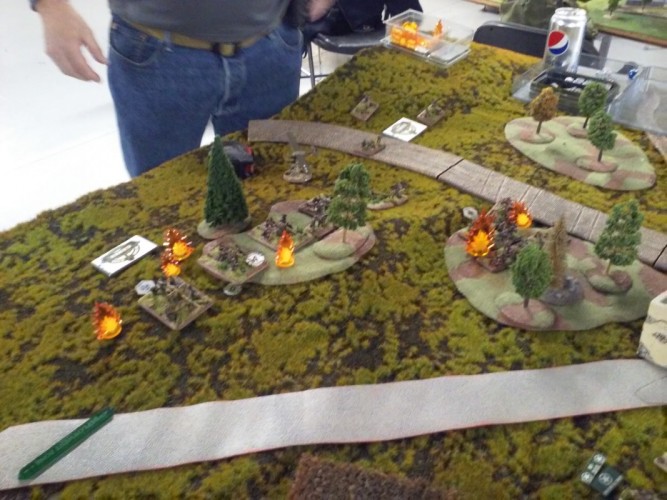 The German Recon knocked out the MG Jeep and bailed the Greyhound on the South side of town. Under cover of the barrage and Pak40s the 1st FJ platoon moved up to the edge of the square. Coming down the road behind them the other FJ platoon moved into the woods, and German armor dashed down the road to try and gain as much ground as possible. 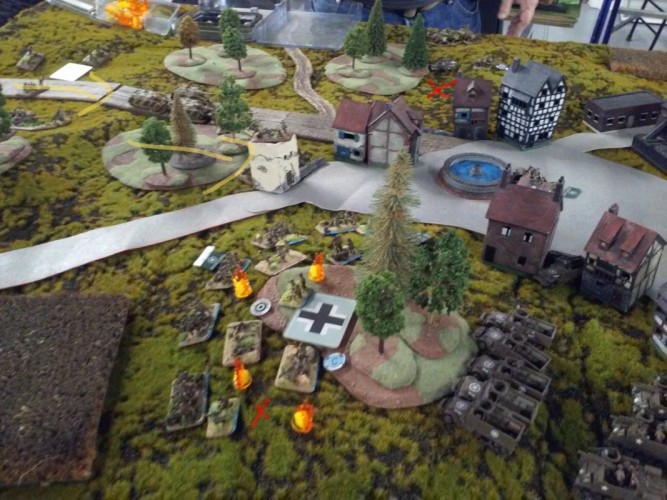 We continued firing on the enemy positions and their recon finished off the Cav patrol.

The Germans armor pushed further down the road while the FJ followed in their wake. 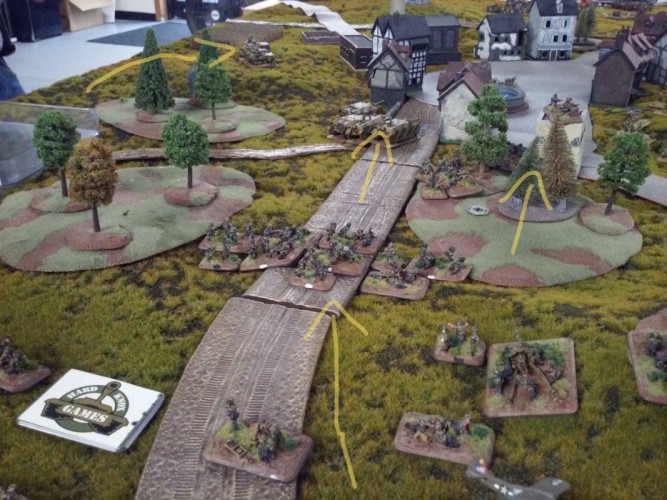 The remaining Cavalry patrol exited the town square down the road to protect the Southern objective. The Armored Field Artillery behind the Tank Destroyers moved cross country to support the Cavalry Patrol.

With the square cleared the 3" towed tank destroyers sprung their ambush from the West side of the town square. Their fire knocked out the advancing Recon slowing the advance against the Southern objective. Unfortunately their fire completely missed the oncoming Panzerjaeger IVs. 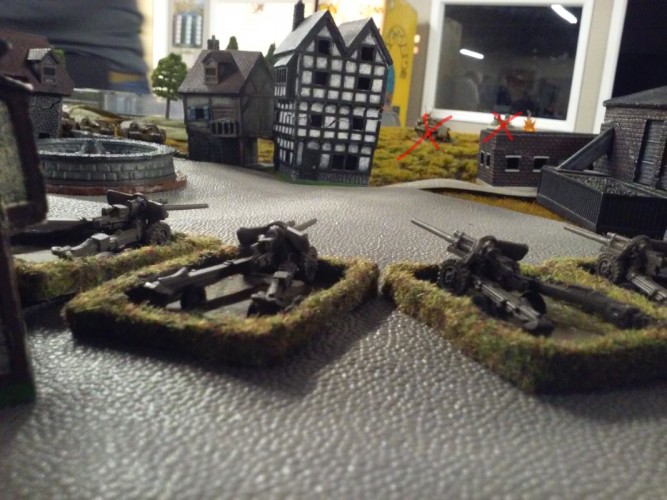 The FJ pushed forward into town while the German armor bypassed the town altogether and moved on the mostly unguarded Southern objective. 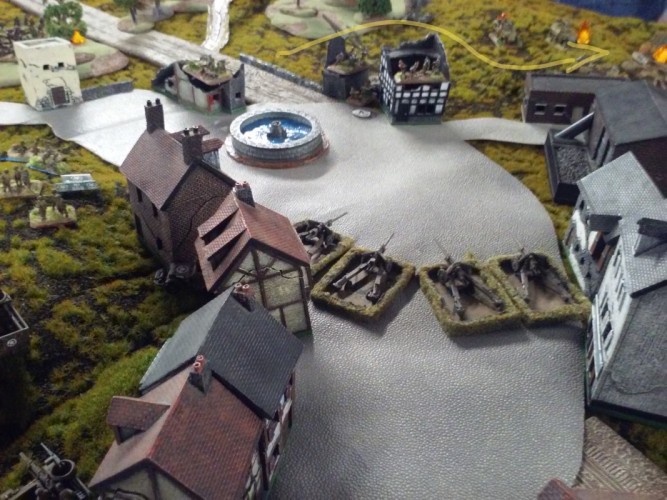 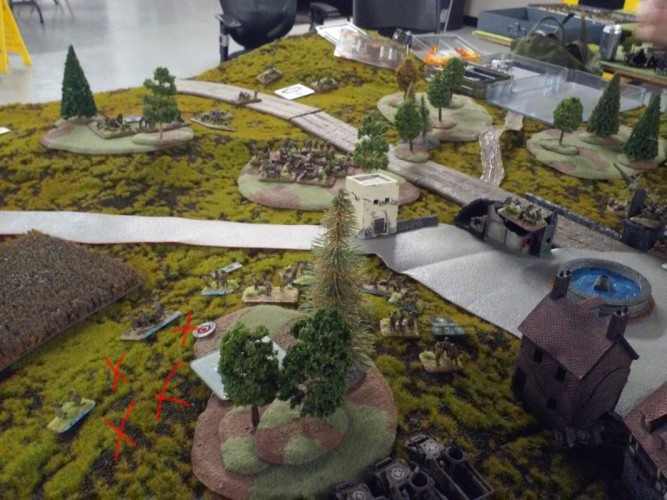 The 2nd Armored Rifle Platoon came from reserve "bazookas first" and were able to knock out one of the German Panzerjaeger IVs and bail another. 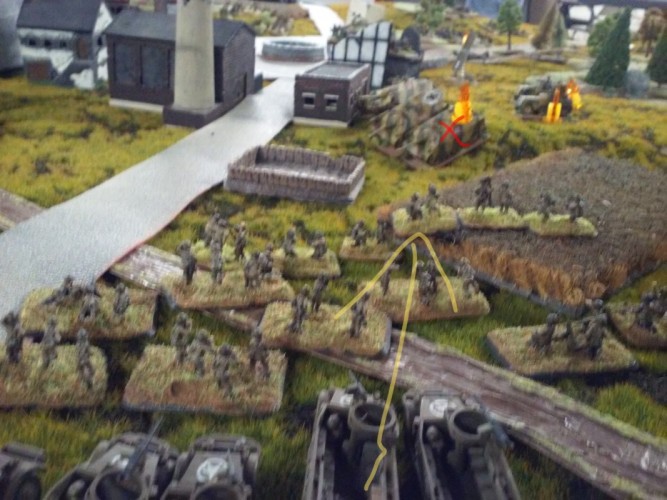 Figuring it was now or never the 2nd FJ platoon marshaled at the base of the hill to attempt an assault. Fortunately for the Americans the FJ Mortars had chosen that moment to try and move forward to provide better support and were unable to provide support. Realizing that charging uphill into prepared troops was going to be suicide the FJ Lieutenant hesitated. 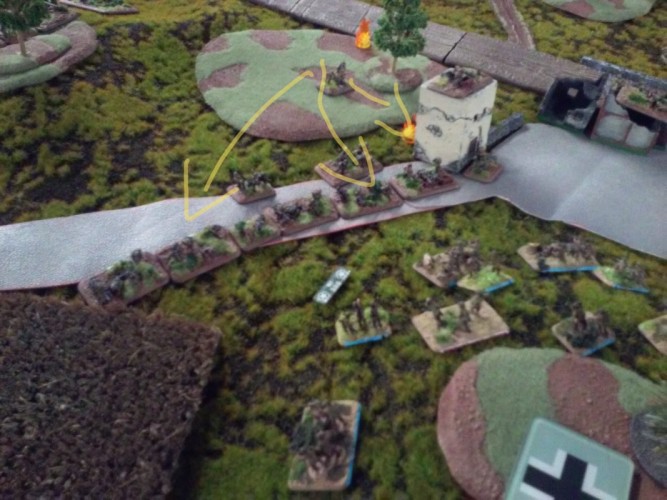 The German armor maneuvered, firing on the Priests and knocked out one of the guns. 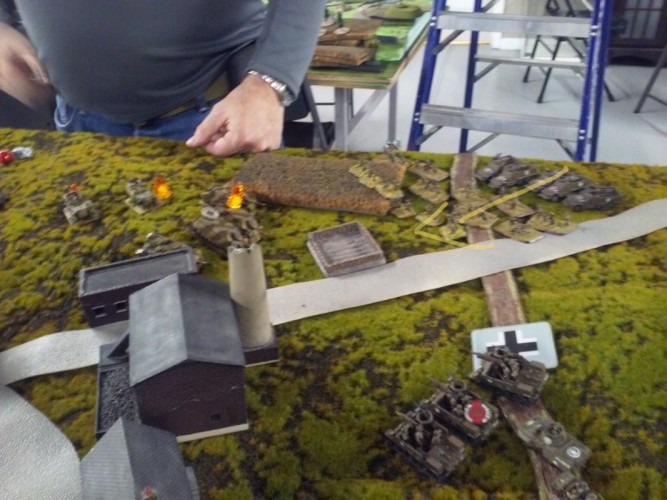 But that left them open to a flank assault from the 2nd Armored Rifles who moved up through the field and killed two of them with bazookas, causing the last one to flee. 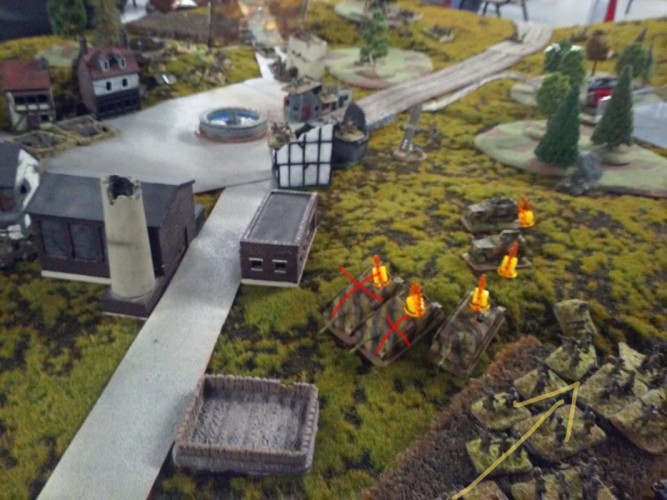 Caught in the open, the 2nd FJ Platoon was bombarded by mortars and machine gun fire. The Americans called up their halftracks to provide supporting fire.

Realizing there was no chance to carry the day the FJ commander called off the assault and ordered his men to fall back. 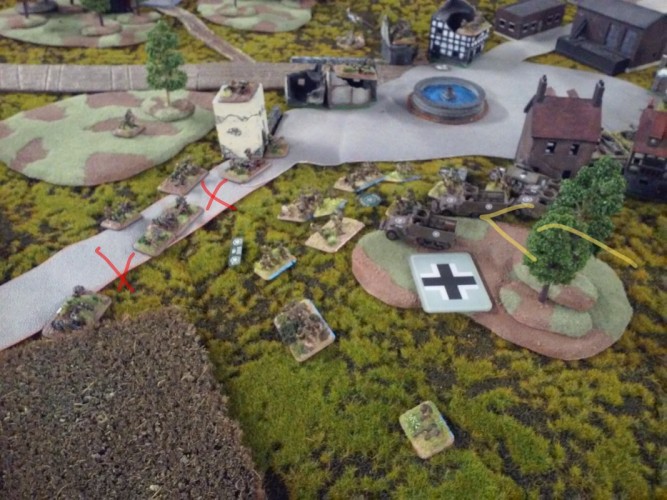 Although the fight wasn't over because neither side had taken an objective Tom conceded that he had very little left to prevent my Armored Rifles from advancing and carrying the day.

I'd like to thank Tom for a great game as always. I even learned a couple of things I was doing wrong in the rules.

I'd also like to thank Charles McKeller for loaning us the use of his new Killing Fields terrain mat that he purchased from Hard Knox Games. It really brought the battlefield to life. 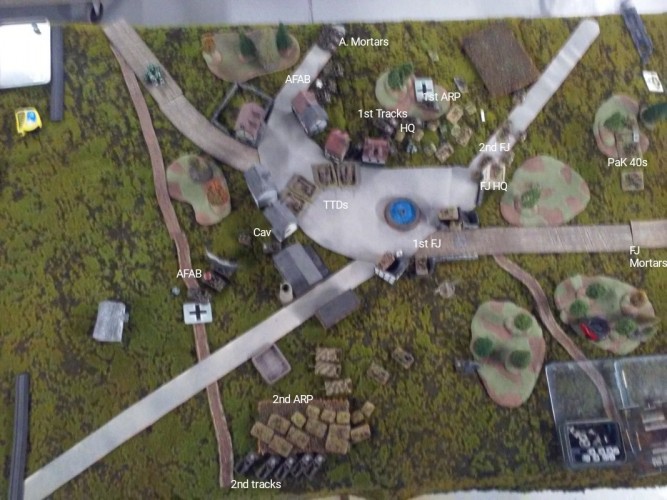 Although I played three games this week, I didn't get my chance at Caen:

1 Person Has Recommended Chad Underdonk For a Commendation