With the countdown to the invasion of France well underway, British and American forces found themselves fighting a series of mock wargames in the rural countryside of Britain. Today it was a chance for the armour to go head-to-head around a small village.

The American forces continues to push on, headless of their casualties, slowly knocking out the defending British troops, however their rate of losses couldn't be sustained and eventually the attacking Americans began to run short of troops.

Over on the distant flank, the umpires ruled that the British reserves were delayed by Partisan activity, allowing the Paras to dig in and completely secure their position. When the reserves eventually arrived the trickle of troops were able to knock out the Cavalry and Armoured Mortars, but were not keen to drive headlong in to the Paras. 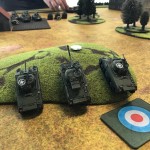 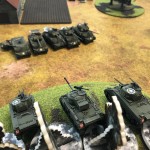 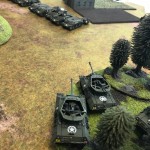 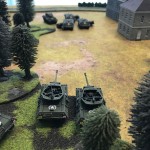 The American forces took the lead and charged across the battlefield, their Shermans charging the British forces hiding behind a small hill. The mortars dropping smoke to force the British out of their defensible position. On the other flank the Cavalry Platoon quickly dashed across the battlefield, flanking the British and carrying a platoon of Paras towards the objective. The British M10s appeared from no-where, working in conjunction with the British Shermans to knock out most of the American 76mm tanks, and M10s. The survivors would end up getting a few shots in before they were wiped out. Over on the forgotten flank the Paras secured the distant objective. 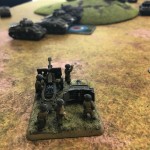 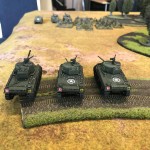 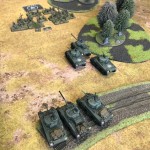