This was a quick game but fun game!

Germans deployed with both infantry platoons guarding the objectives and the AT guns in the middle supporting both. I had mortars and IVs in reserve. My idea is to hold tight hopefully draw in the british armor and then bring on the panzer IVs in the right spot to smash assault and push through to my objectives
British deployed with all armor on table and the artillery/paras in reserve.

Turn 1
Pak 40 snipes a sherman on the road

A slow start for the Brits as they hesitate and decide to shoot at the AT guns at distance and great shooting from Brits sees both AT guns go down.

Turn 2: Germans hunker in with nothing to do. No reserves
British realizing they have a golden opportunity rush forward. Sporadic shooting takes a couple stands of infantry. Stuarts are only tanks really able to get close to assault next turn

Stuarts charge into the infantry the Shermans come in right behind thinking they will shoot and get in next turn. Disaster strikes the stuart column. Pushed back in defensive fire with two killed by panzerfaust and Shrek.

Turn 4: Germans get 1 reserve!! Panzer IV come on the left flank. The grenadiers on the right are able to faust one more stuart and shrek a sherman to death. The panzer IV kill a fire fly and a Sherman. At this point the British player concedes realizing he was not quick enough and that a slow death for his force was inevitable. 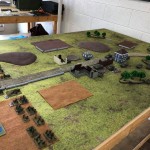 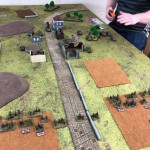 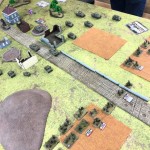 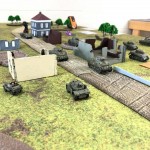 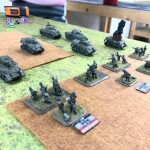 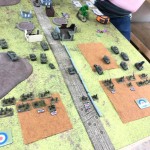 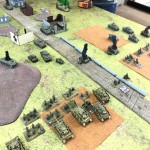 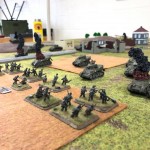 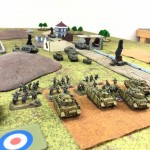