Drive them back to the Beach - Bridgehead

With scraps of information coming in with the reports, the order was for PALA 130 to drive towards St. Mere Eglise to conduct a ‘Recon in Force’.

As they approached the town, the leading Puma and Sd Kfz 250 Recon spotted an US Armoured Company forming up on the edge of the town. Quickly, determining the size of the size of the force, the german commander ordered the the 250 recon to spearhead down the right flank with the bulk of the infantry with them to take the objective. The Pumas were ordered to head down the left to harass the artillery park. Knispel’s Tigers were ordered to keep out of range of the Sherman 76s while trying to take out the Artillery.

The Yanks had a single Infantry platoon holding the two objectives, supported by the M7 Priest and the M4 Mortar HTs. Hiding somewhere were a platoon of 76s; a potential problem for Knispel’s Tigers.

The initial drive saw the armoured panzergrenadiers and panzergrenadiers pushing up to the wheatfields, while the recon platoon took up position behind a small wood outside the orchard.. The Nebs launched a barrage on the infantry on the town but only managed to take out a single team. The Pumas took up a reversed sloped position and attempted to shoot at the Priests but both shots missed. Similarly, despite having re-rolls, Knispel’s Platoon failed to land any hits.

With radio contact intermittent, the Americans could not mobilise their reserves on the other side of town. The American response was to pop their ambush of four 76s behind the hedge to support the infantry on the objective. The Shermans took their shots but could not find their targets. The M4 HT’s commander decided to throw caution into the wind and drove up to take side shots on the Pumas with their .50 cal. A single hit was all it took to disable one Puma. Seeing their comrades dead sent the last remaining Puma running. The single 60mm mortar from the cavalry recon laid down an artillery barrage on the infantry in the wheatfield and succeeded in taking out 2 infantry teams, despite being a single gun.

The germans now pushed forward en-masse towards the objective. Taking cover behind a plowed field, all 3 platoons prepared to concentrate their fire on the 4 infantry teams that were close enough to hold the objective. the Nebelwerfers laid down a smokescreen to block off the Sherman 76s. Then, with the combined firepower of thirteen 250s and 251s and 21 infantry, all hell was let loose on the defending infantry. However, miraculously, only 2 of the US infantry teams were lost. In that firefight, the cavalry recon jeep was also blown apart. The tigers now having overshot previously trained their guns lower and Knispel’s tank accounted for 2 M7s.

With the smokescreen still in place, the Sherman 76s were forced to leave the safety of the hedges and come forward to spray lead on the advancing infantry, but again achieving nothing. With radio-contact established, a platoon of 76s suddenly appeared from behind the wheatfield. The Germans were incredulously fortunate to only have one HT succumb to the volley, though, losing a panzerschreck and infantry team in the process. The lone M7 somehow managed to remain calm and collected despite losing their brothers. He managed to range in on the HTs and infantry but failed to hit anyone. The cavalry recon commander in the M8 also had nerves of steel. He stayed on an fired on the german HTs with his 37mm but somehow failed to penetrate.

By now the wind was starting to dissipate the smokescreen, the panzergrenadiers were now quite literally caught between a rock and a hard place. With 2 platoons of Sherman 76s sandwiching them and only 3 panzerschrecks, should they advance and charge the Shermans in front or behind. The decision was made to take advantage of the limited cover the fences would provide. all 3 platoons moved forward and into the field. The panzerschrecks all hopelessly missed their targets. The US infantry again kept their heads low and weathered another hail of MG fire, losing only a bazooka team in the house. The tigers had lost sight of the remaining Priest and had to move to reacquire new targets. One bogged outside the woods while Knispel took aim and missed the Sherman 76. The repeat bombardment only claimed a single team but the GIs were slowly being cut down.

By now a platoon of Stuarts made their way to the fight. Appearing from the american’s right flank, they made a beeline for the german infantry. It was now the german’s turn to experience a hailstorm of lead as every armoured vehicle within range, M4 76s & M5 Stuarts all focused their fire on the poor encircled panzergrenadiers. The fire took a heavy toll on them, losing two panzerschreck teams and four MG42 teams.

Both the panzergenadier platoons were too shellshocked to rally, leaving only the recon platoon to charge forward to assault the two closest M4 76s. The other platoons dug-in where they were. The last remaining panzerscheck tried, despite being pinned to shoot the trained M4 ahead on them managing to hit but failed to brew the tank. The volley of MGs from all the HTs and Infantry again only managed to clear the last infantry stand in the house but not the one outside. the PC led two brave teams to attempt to assault the two M4s, carefully restricting their exposure to defensive fire but 6 hits from 10 shots repelled the assault. thankfully no teams were lost. The 250/9s manoeuvred forward and shot at the solo M7 with their 2cms but the M7 just shrugged off their fire. The tigers also creeped forward to get shots at the 76s taking one out. Repeat bombardment saw another team fall casualty to the Nebs.

As if on cue, another platoon of Stuarts and M4 Shermans appeared from out of the wheatfield, the tide seemed to be turning for the germans. Both platoons surged forward attempting to apply pressure to squeeze the living daylights out of the german infantry. The Calvary Recon commander finally decided that discretion was the better part of valour and bugged out. However, the M7 Priest doggedly chose to stay and drove forward to machinegun the infantry. The 3 Stuarts targeted 250/9s and managed to kill one and bail one with their 37mm. The once more, armoured vehicles unleashed another torrent of lead at the infantry. As they cowered safely in their foxholes, the panzergrenadiers could hear their recon brethren being cut down as they were caught outside in the open. All but two teams were left alive. The 81mm mortars finally ranged in on the field and took out another 2 teams.

Sensing a let up in the enemies fire, the german CO jumped out of his foxhole and rallied all 3 infantry platoons for a final assault on the objective. Calling out to Knispel on the radio, he order the Tigers to take out the Shermans which they promptly did; killing one and bailing the other. By now the Shermans had strayed into range of the german panzerfausts. All 3 platoons let fly a salvo of panzerfausts and panzerschreks bailing the remaining 76s. All that remained to be done was for the recon platoon to charge into assault to capture the Shermans. With no one else in range, the battle finally concluded with the germans securing the objective.

The germans lost both their recon platoons and secured a hard-fought 7:2 victory. 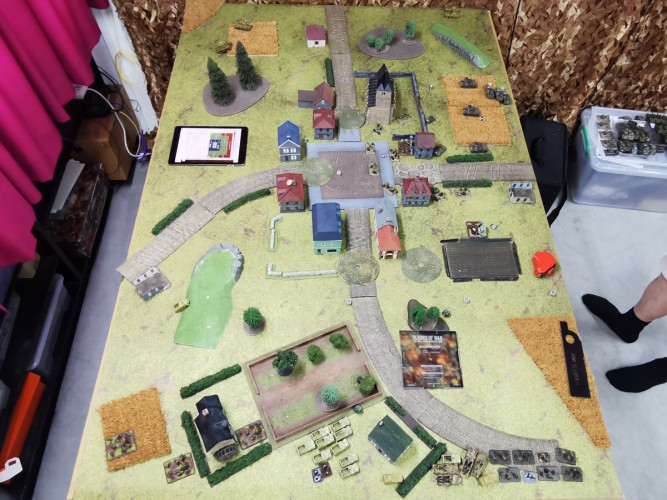 US GIs dug-in around the town center

Sherman 76s leave the safety of their hedge

Tigers sneak up on their quarry