Excerpt from the memoir of Colonel Johann Falkenberg

The Wehrmacht had suffered many reverses in the Mediterranean and the Eastern Front, but the beginning of the end surely was the Allied landings on the Norman coast in the battle the enemy called D-Day.

I found myself in command of a section of the Normandy coast after losing my left arm near Samodurovka, north of Kursk. That wound would greatly limit my career opportunities, to say the least, which is why I found myself commanding the defenses on a section of the coast that we hoped would never be attacked.

My command was made up of a strong point that consisted of a couple of bunkers housing ant-tank guns, a couple of dug in mortars, an anti-aircraft gun, and quite a few machinegun positions. I had a company of infantry to back this up, not poorly trained Ost troops but experienced Grenadiers, with a 120 mm mortar battery in support. I held back a tactical reserve of one of the Grenadier platoons, an armored car section (there was nothing to scout, so I planned to use them as mobile light guns) and, most importantly, a platoon of four Sturmgeschutz.

Though the initial naval bombardment did somewhat less damage than expected, it did take out the mortar HQ and one of the Grenadier platoon HQs, causing both units to reposition in order to maintain command control. Immediately after the bombardment American Jabos strafed the repositioning men, adding to the chaos. The Jabos were overhead almost constantly during the battle.

The currents pushed the American landing craft to the left of my sector. A company of American infantry and a platoon of tanks landed on the beach and made for the sea wall, followed later by a machine gun platoon. At first, I thought the drift of the American landing craft was fortuitous because they landed in front of a relatively wooded area, which would slow the tanks and allow a Grenadier platoon to engage their infantry at close range. Unfortunately, the trees also hindered the lines of sight of my guns. I called in mortar fire from the belfry of a church, but it took longer than it should have for the mortar fire to take effect.

Communications were in chaos. I received a message that an American tank company had landed on my flank, but the message was so garbled that I did not know if they would approach from the east, west, or both.

The Americans on the beach slowly advanced. They started taking significant casualties, but I lost more and more positions. A lucky tank shot destroyed a bunker housing an 88mm gun. Their flamethrowers were particularly effective against bunkers and other prepared positions. I had mine fields protecting the more open terrain to my right, but the Americans bypassed them, advancing to my left and center. I called for my tactical reserve, but they were delayed by the chaos and Jabos. The American flanking armor was in my rear before a single reserve unit showed up. The Americans rolled up my forces from my front and rear, and my reserves were too little too late. The situation was hopeless.

I had lost my first battle in Normandy. It would not be my last. 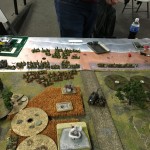 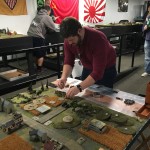 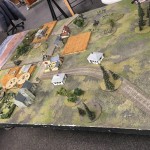 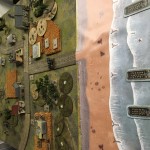