War Daddy Pool was on a roll. Just having bested Michael Wittmann outside of St. Lo, Pool swung his ragtag platoon north to Cherbourg in hopes that he could make a difference in the struggle to mop up the resistance in the port city.

Once again, however, he found himself on the defensive against a German counter attack. This time it was Josef-Wilhem Rettemeir looking to stop the War Daddy in his tracks.

Rettemeir pounced on Pool’s platoon at a small farming village just outside of Couville to the south of Cherbourg.

Rettemeir was in his Panther but as much as he wished his platoon was similarly equipped, he had just one Panzer IV, one StuG G, and one Pak-Wagen at his disposal.

They would have to do.

Pool had lost one of his Sherman 76s, but he had managed to keep two of the three from his original platoon. He picked up a Sherman 75, and an M10 Tank Destroyer from divisional command to round out his platoon.

As Pool’s tanks approached the village from the south, his radio lit up with calls from a spotter plane — enemy tanks were approaching from the north.

War Daddy instructed his group to head for the bocage just west of the village as the Germans swung towards the buildings then cut to the west to try and beat Pool to the safety of the hedgerows.

Rettemeier ordered the Panzer IV to flank east towards a patch of woods hoping to flank Pool, but as the Panzer entered the tree line, a Sherman 76 broke through a nearby hedgerow and lined up a shot. The commander of the Sherman sensed an opportunity and shouted to ready an HVAP round.

At a scorching 3,400 feet per second, the hyper-velocity round hit the side of the Panzer IV’s hull and blew it’s turret into the sky.

One shot, one hit, one kill.

Rettemeier knew that he was in trouble, and that if he didn’t act quickly he would lose the initiative, and then lose the fight.

At the same time he lost the Panzer IV some more bad news came crackling over his radio. The Sherman 75 had hit the Pak-Wagen and though no damage had been done, the crew had bailed out. After a long string of expletives shouted from his command hatch, Rettemeier watch the Pak-Wagen crew scramble back on board.

Rettemeier’s remaining forces then shifted to the west hoping to draw the Amis out from the bocage.

The plan seemed to work as Pool’s Sherman 76 broke cover. Rettemeir and Pool traded vicious hits. While the Panther scored a solid hit on the Sherman, Pool’s gunner managed to hit the Panther’s ammo store sending smoke and shrapnel skyward.

Rettemeier and his crew were still in the fight and quickly regained their composure.

The Sherman 75 managed a hit on the StuG G that damaged the Sturmgeschütz’s optics.

Rettemeier rallied his platoon in the woods to the west of town, hoping the cover there would work to his advantage.

Pool took the opportunity to consolidate his position in the bocage — and it paid off.

Pool’s Sherman 76 and the platoon’s M10 broke through the bocage and surprised Rettemeier’s Panther. Pool glanced a shot off of the turret that rang like a bell and sent the Panther crew into shock. But that shock did not last long as the M10’s round crashed into the engine of the Panther and sent a large fireball into the sky.

Not all was well however. The Pak-Wagen had struck the Sherman 75 so hard that the crew bailed out and dove into the hedgerow.

The StuG and the Pak-Wagen headed for the relative safety of the village. Whilst repositioning, the StuG laid a solid hit into the now stationary and crew-less Sherman 75.

As they maneuvered in and out of the cover of the buildings, the StuG landed the death blow on the empty Sherman sending it’s crew deeper into the Bocage as their tank burned. The Tank Destroyer chased of the StuG sending a round skidding off its roof.

As the surviving Germans pushed to the south around the village, they found a temporary respite from the US guns, but it was only temporary.

As Pool pushed through the village, he watched the M10 strike the StuG causing its crew to bail out just as the other Sherman 76 ventilated the StuG and put it out of commission permanently.

The crew of the Pak-Wagen, facing three US armored fighting vehicle decided that an Allied prisoner of war camp was far better than dying in their glorified truck.

The Americans had won this round. 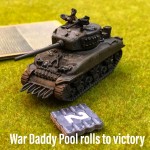 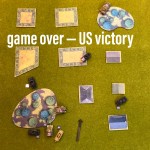 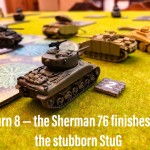 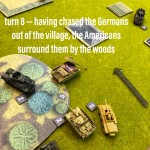 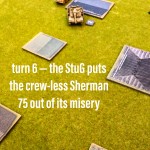 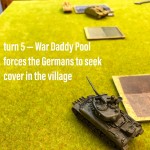 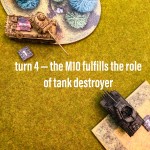 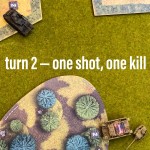 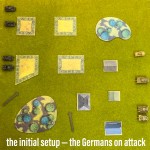 1 Person Has Recommended crosswiredmind For a Commendation