It’s hard enough securing an objective, but two objectives at the same time is FUBAR.

Unfortunately War Daddy Pool was tasked with that very mission. In between him and his goal were not only an enemy platoon with a Tiger, two Panzer IVs and a Pak-Wagen, but two minefields and a house were blocking his path to the northeast objective.

Pool in his Sherman 76 and an M10 Tank Destroyer assigned to his platoon headed north to counter the Tiger and a Panzer IV who were closing in on the northeast objective. Both he and the M10 landed hits on the Panzer IV, setting its engine on fire.

To the southwest a Panzer IV and a Pak-Wagen moved in on their objective. Many shots were exchanged but only on minor hit was landed by a Sherman 76 on the Panzer IV.

The Germans position themselves solidly on both objectives. Pool found himself unable to press to the northeast in time to prevent the Germans from scoring. Instead he gambled that the M10 could finish of the Panzer IV while he would join the other two Shermans to the southwest.

The gamble paid off and M10 finished off the already burning Panzer IV preventing the Germans from winning outright on the second turn.

The turn where every tank fired on another tank with absolutely no effect. However, War Daddy was able to get a numerical advantage in the southwest while the M10 held on in the northeast.

With the Tiger and the M10 dancing around the northeast objective, the Americans were skating on thin ice. Pool almost gave up hope when the Tiger struck the M10, but fortunately the M10 survived.

It would be up to he and his Shermans in the southwest to push to victory, and Pool did just that as he landed the killing blow on the Panzer IV. 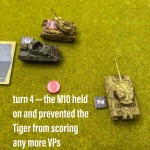 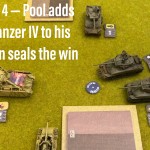 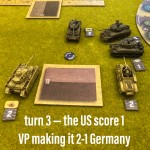 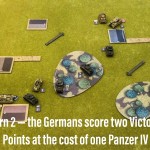 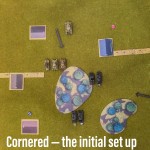 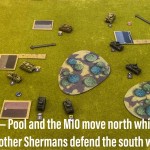