On the road the Lorient the 101st ran into a stubborn group of Panzergrenadiers with armor support. The mission called for the opposing sides to start in a meeting engagement from opposite quarters and basically fight a battle of annihilation. We were relatively successful at that.

The paras had two platoons with attachments, para mortars, para pack 75s, four recon jeeps, the HQ and a pair of 57mm guns in the core formation. Rounding out the force was three Shermans, four M10 Wolverines and P47s on call. Aircraft have only rarely been worth the points in my games but I figured one more try.

The Germans had their HQ, three platoons with panzerfausts, two PAK40s, four 2cm SPAA, four MkIV panzers and a trio of Panthers. With only the Wolverines to take out a Panther, I knew I had to rely on the “Jugs” or draw them away from defending an objective and swarm it. Each side had 40% reserves which we immediate and fast (an extra dice at each turn).

I started with the artillery, jeeps and M10s in reserve. Since I couldn’t bombard on the first turn I figured to bring them on table and open fire. My company command had a good view of the (too) open field and fortunately the Germans had no indirect capability. The Germans had their SPAA and Panthers in reserve.

The long and the short of it was, I got planes 8 of 10 turns and they killed exactly one Panther and one MkIV. Both of us made errors with our infantry and coupled with my abysmal dice; i.e. 8 rolls for 4+ and a total whiff, and Heer Bron’s good rolls; kept save the Panthers against rockets, meant that our infantry destroyed themselves and the Panthers walked to the objective, per the last picture. I rolled the top of the round to get planes, failed and conceded. All the AT capable weapons were gone. A well-played game by Heer Bron and proof of why we use dice. Statistically I should have blown his guns and infantry to pieces with repeat bombardments but I could never make a FP test once he was dug in. Next time for sure! Nice looking table anyway. 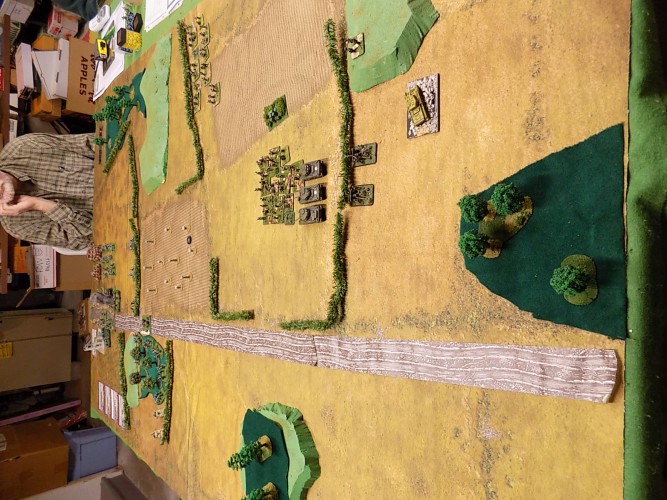 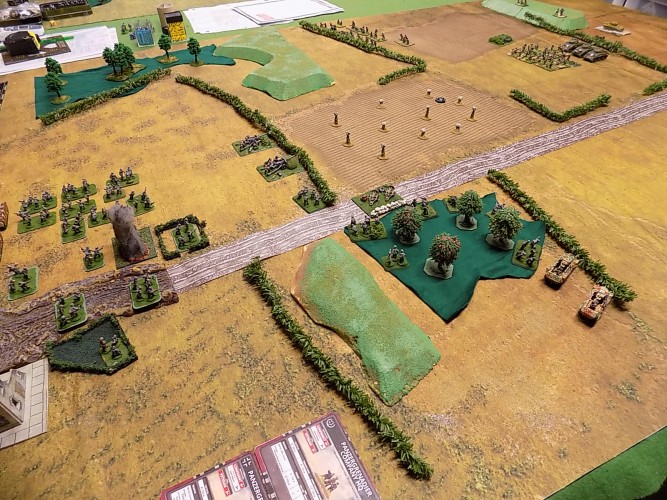 German view of the set-up. 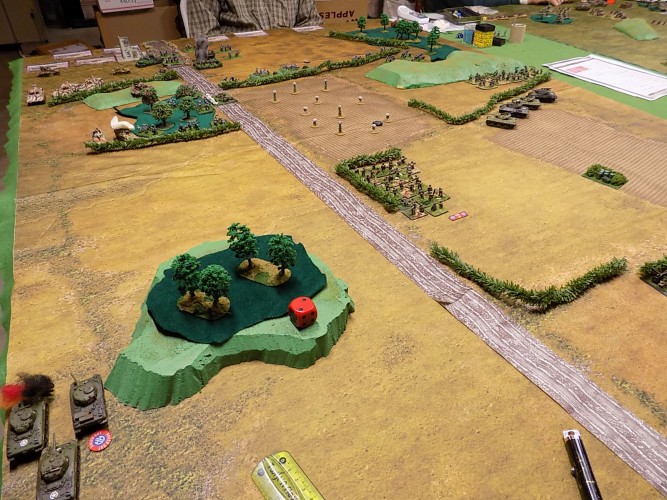 The scurry to cover but the freshly arrived Panthers claim a long-range victim. 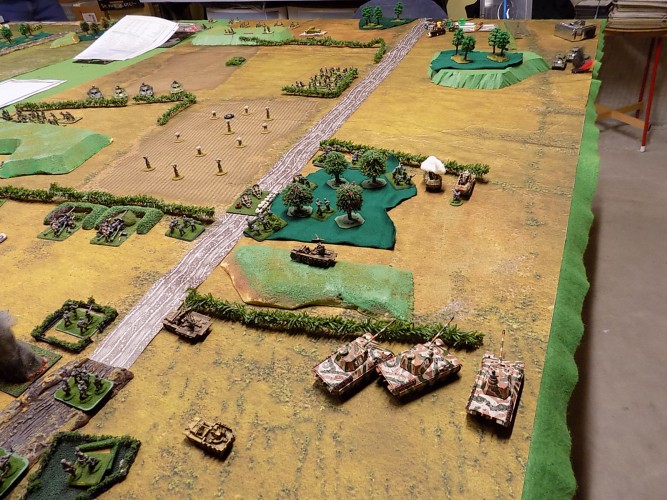 Germans have by and large dug in and are awaiting my attack. 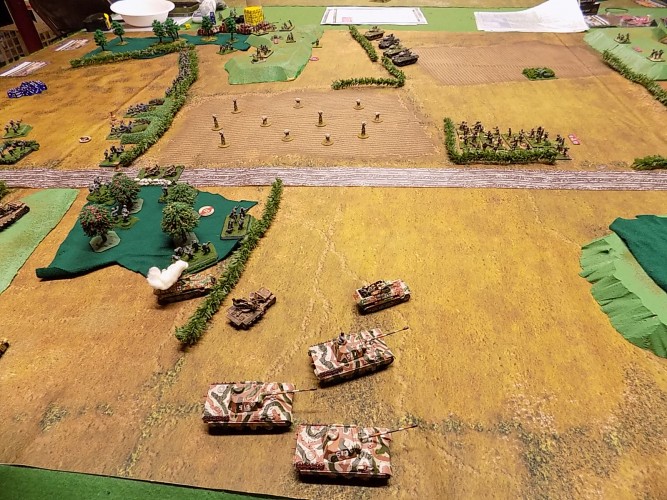 Now they start to find their aggressive spirit. 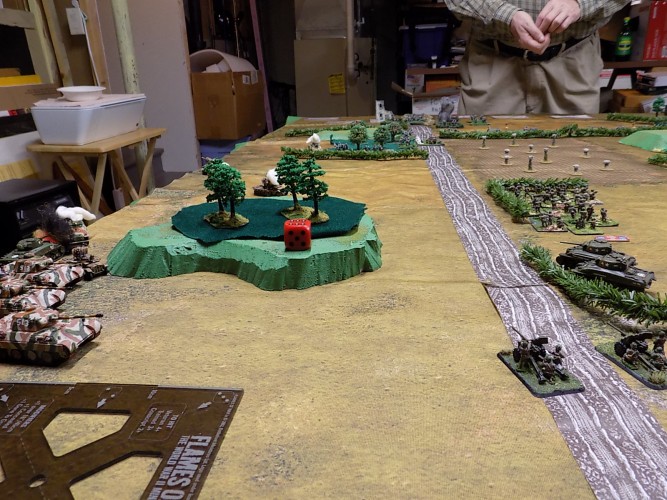 The two Shermans dance about, taking out the SPAA. Setting up the P47s, I thought. 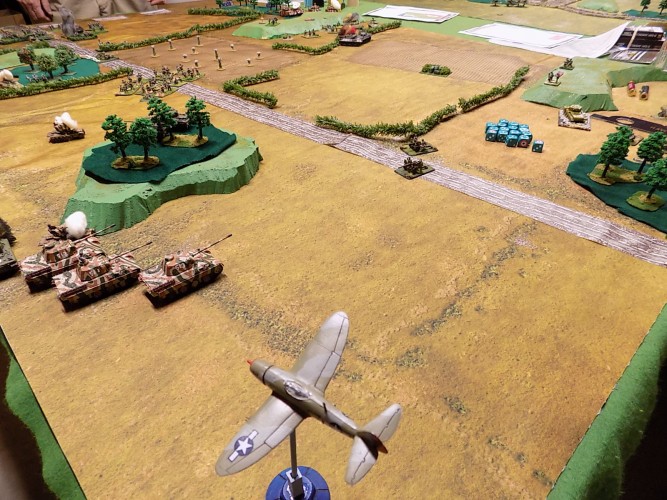 But they accomplished very little despite a number of appearances. 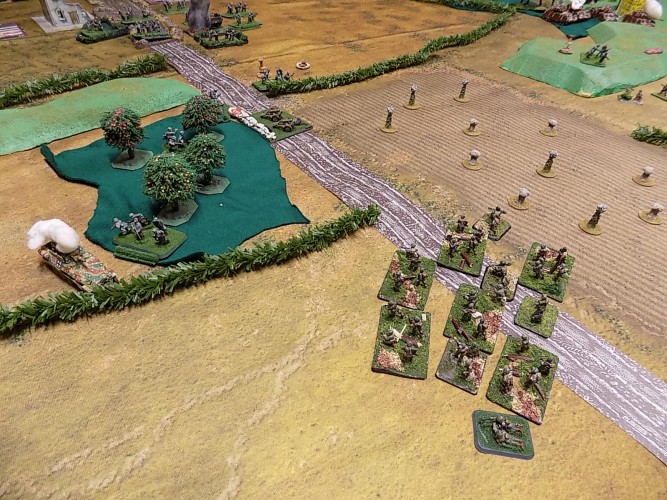 Having slowly whittled down the panzergrenadiers, the paras make a rush to glory. 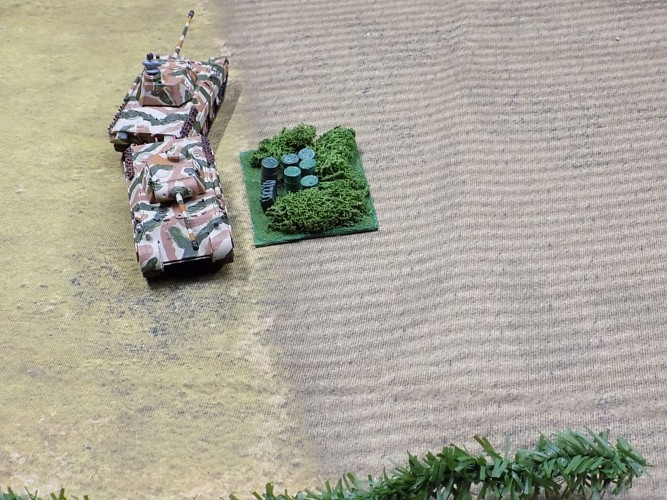 But in the end the combat effective US units were gone and the Panthers sat triumphant.

1 Person Has Recommended Currahee For a Commendation