Run, run get around, I get a Rouen

Finally winning a dice roll-off to pick the mission (2 vs a 1) I chose the Dogfight since it seemed one where the Germans could close the gap. The game was another match-up of panzergrenadiers with MkIVs and Tigers in support vs. a US tank company. My force had 10 Shermans, 4 Wolverines, 6 Priests (as an experiment) and a full-strength armored infantry platoon. The Germans had two platoons of infantry, heavy machine guns, PAK40s and Wespes in one formation and MkIVs and a pair of Tigers in the other. The mission calls for us to potentially start very close and I of course placed my destroyed Cromwell objective as close to the center as possible. 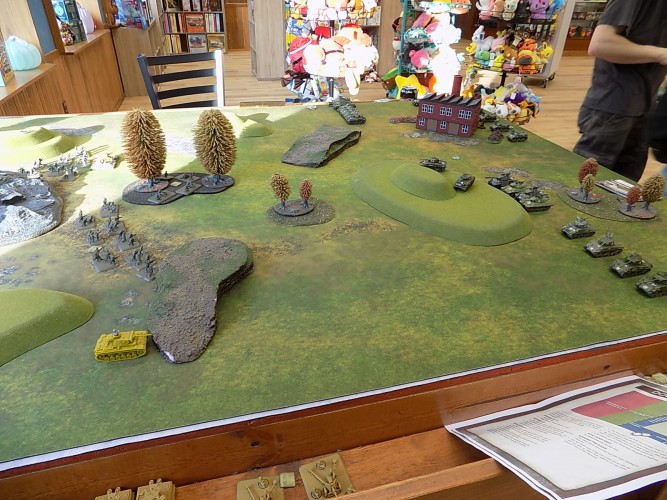 The view of the US deployment. 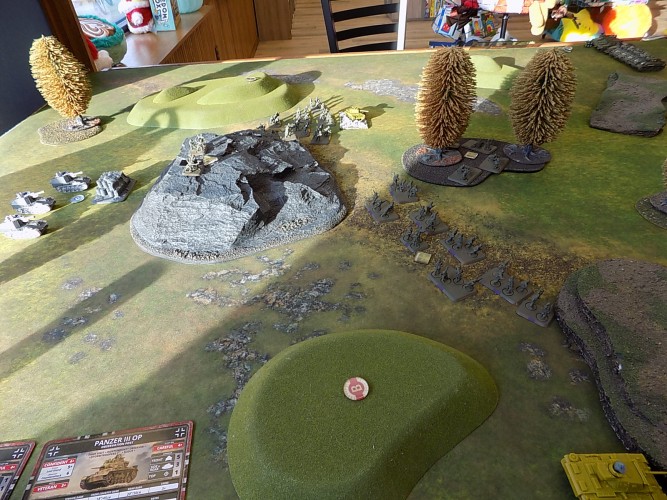 Full German side showing the Wespes behind the impassable (to vehicles) ridge.

In my first turn I moved my armored infantry to cover on the right, still mounted up, The artillery was able to relocate their fire missions, though to little effect, and the 76mm Shermans tried to take out the German observer tank, also without success. In the bottom of the turn the ambush was revealed with the PAK40s taking out two of the Shermans. 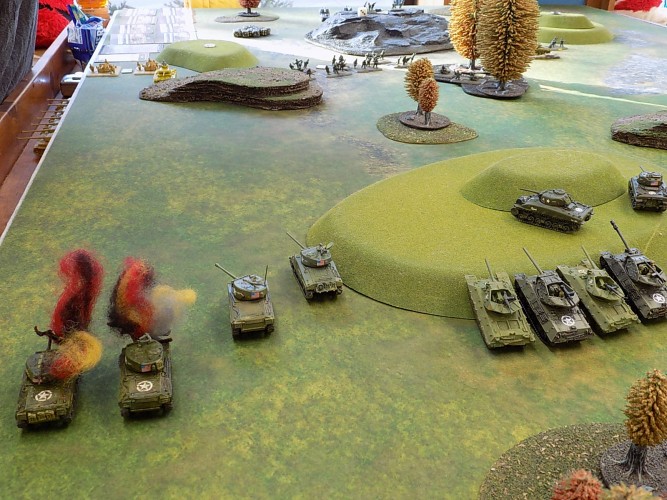 Retribution was swift as the Priests zeroed in on the guns, taking out one, and the other failing their last stand test in the bottom of turn 2. Meanwhile the other artillery was slowly chipping away on the right. 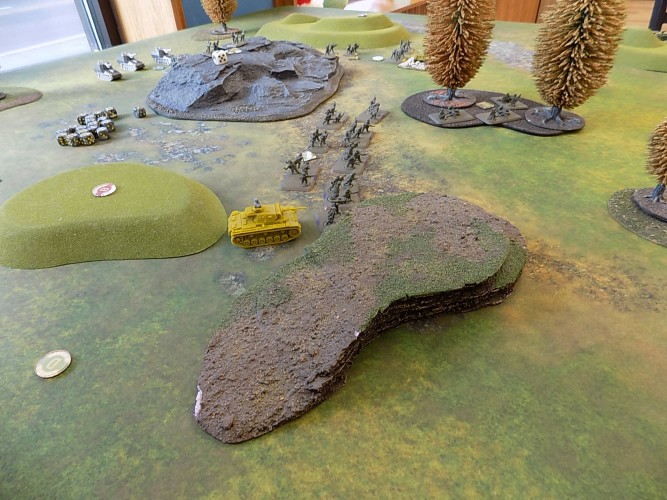 The observer relocates to cover the center as the HQ drops fire on a halftrack and Shermans.

Turn 3 I decided with the PAK40s gone I could move on the near objective. The halftracks advancing, spraying the dug in Panzergrenadiers with MG fire along with the repeat bombardment and some help from 75mm Shermans. Although the Germans would be rolling for reserves, between the 5+ needed and the scattered nature I felt it was worth the risk. 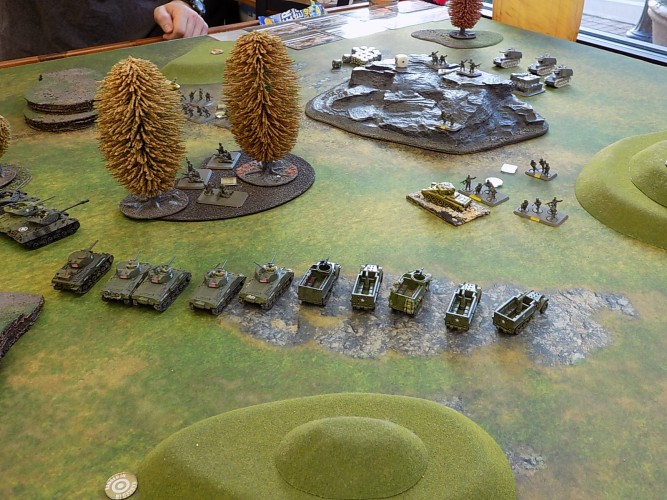 The German MGs get a lot of attention in anticipation of an assault next turn. 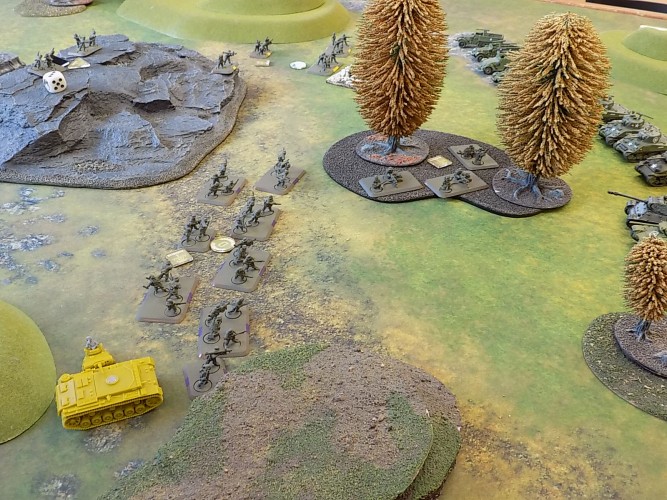 Observer is neutralized and the other Panzergrenadiers are kept pinned.

In the bottom of Turn 3 the Germans failed to get reserves, used their "Lucky" card and still failed. The MGs moved out of foxholes to try to assist the infantry, but all hits on the halftracks, including artillery, produced no positive results. So the American infantry dismounted and moved, the bombardment shifted away, the Panzergrenadiers were pinned and some stands eliminated and the heavy machine guns were wiped out. The subsequent assault destroyed the defenders as we consolidated around the objective. 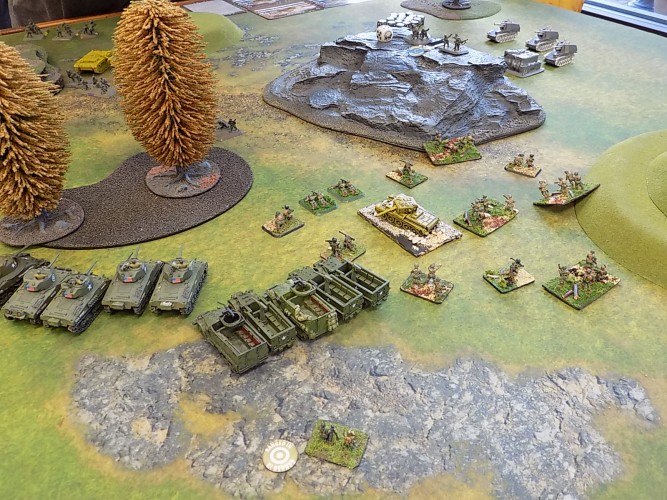 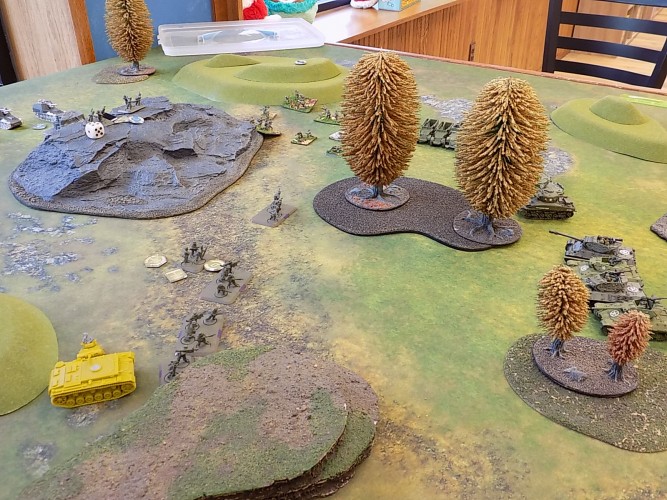 The other Germans are badly knocked about as well.

In the bottom of Turn 4 the Germans again failed to get reserves, so with no possible way to shoot us off the objective the game ended. Dice were hot and cold for both sides in the game but the lack of reserves doomed the Germans against the highly mobile Americans.

The campaign is over for us and has been most enjoyable. Our group was energized and galvanized by the six weeks of play. As a bonus we got very competent with the rules and knowledgeable about our styles of play. The extra factor of competing with and against the world was just a bonus. Thanks.