The table and deployment 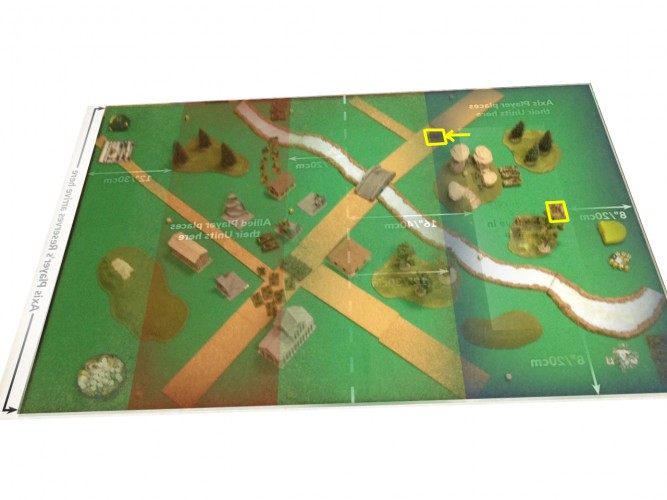 Falaise Breakout. Objectives in Yellow. Note the upper objective was moved because of Caen Award 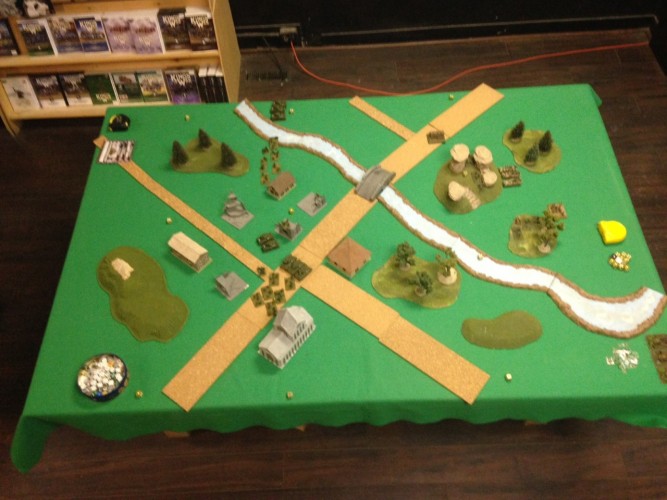 US Rangers and Shermans deployed on the left, Armoured Panzergrenadiers on the right.

On the Axis side, one platoon of Armoured Panzergrenadiers and the HQ were in reserve. The 3 Pak40s were held in ambush.

The Ranger platoons moved up but could not get in firing range, whereas the Shermans blitzed and crossed the river to approach the upper objective. The tanks opened fire on the dug in grenadiers to no effect.

The axis called in reserves but received none. At this rate, the dug grenadiers wondered if it would all be over before they even arrived. But the Pak40 appeared from ambush and, together with the panzerschreks, killed two of the approaching Shermans. 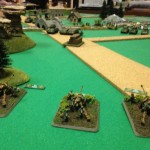 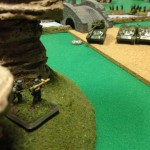 The Sherman platoons all moved up to challenge the objective, but there was a panzerschrek team within 4" that they would have to eliminate it to hold it. One of the Ranger teams moved into the southern woods while the other and the HQ crossed the bridge and fired on the dug in grenadiers on the hill to no effect. The Shermans again fired on the panzerschrek and the Pak40s, as well as an sdkfz, but only killed the latter.

A platoon of Armoured PzrGrens arrived from reserve, but had a long way to go before the could participate in the defense. Meanwhile, the Pak40s and panzerschreks killed the Sherman HQ and the rest of first platoon. The dug in PzrGrens fired on the approaching rangers killing several. 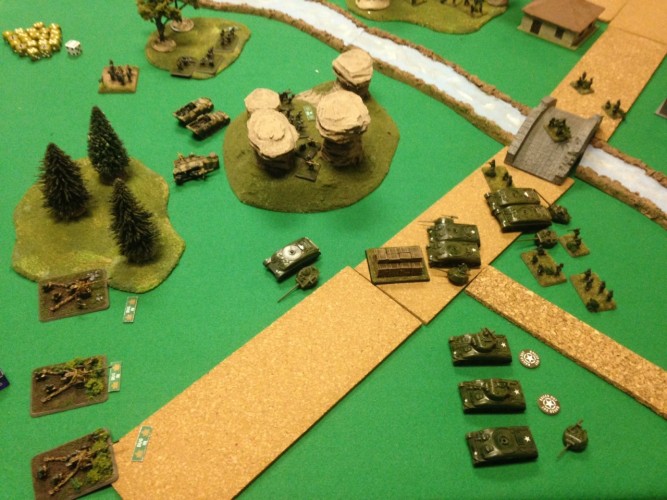 The Rangers in the southern wood moved up to cross the river, while the northern platoon moved up within assaulting distance of the PzrGrens on the hill. The remaining Sherman platoon fired on the panzerschrek and Pak40s, but again had no success. The Rangers fired on the PzrGrens and assaulted them, but were pushed back by defensive fire, leaving only a few bases.

The PzrGren HQ arrived and began to move up, while the platoon that had arrived on the previous turn road dashed towards the bridge. The Pzrgrens in wood and sdkfzs fired on the Rangers in the river, killing all but one. The Pzrgrens on the hill fired on the Rangers who had assaulted, killing all but one of the platoon and leaving the HQ intact. The Pak40s meanwhile finished the last of the Shermans. 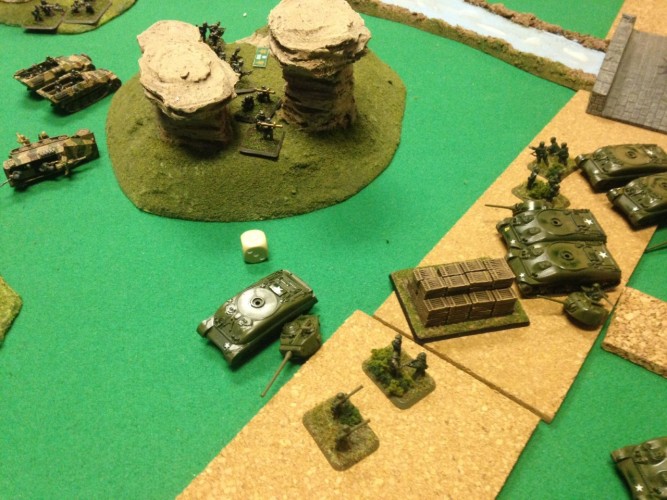 The rangers fall back

The remaining Rangers made one last valiant attempt to take the hill, but were again forced back by defensive fire.

The reserve PzrGren platoon, finally in a position to fire, unloaded into the Ranger HQ, the plucky Americans refused to die. But no amount of tenacity could save them from the remaining fire of the PzerGrens on the hill and Pak40s. The Americans were killed to man.