Out of game:
This game was a rare opportunity to play Brenton, who I haven't played in months. At the time of writing he is not registered in the D-Day campaing, but he may yet get himself an 11th hour generalship.

PS. I mostly forgot to take pictures until late in the game.

In game:
As the Armoured Panzergrenadiers nervously prepared their defenses outside Vernon for the inevitable British/Canadian attack, a ruddy, bearded man accompanied by a motley group of diminutive asian men arrived at the General's tent. After a brief conversation with General Fuchs, they began to drew a strange mandala on the ground and began chanting. A few of the men began to laugh, but their mirth was cut short as cold winds suddenly began to swirl about them in mid July. In mere minutes, the sky darkened, the temperature dropped and it began to snow furiously. Ernst Schäfer and his Tibetan shamans had tapped the power of the elements for the glory of the Reich. The men cheered and prepared themselves, knowing that Nature itself was with them. 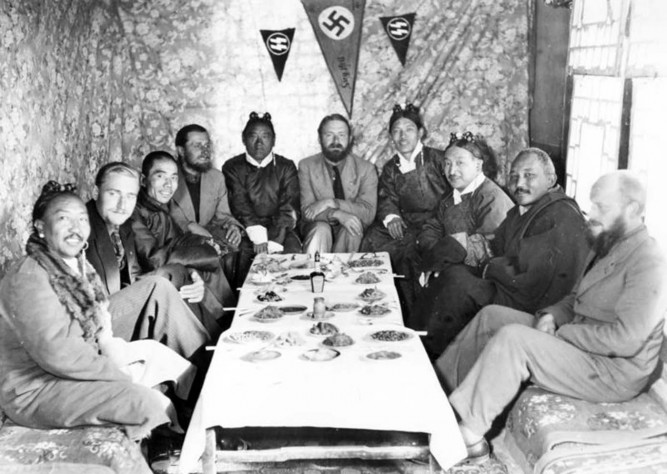 Ernst Schäfer flanked by his cabal of Tibetan shaman allies.

The table and deployment

"Encounter" at Vernon. Objectives outlined in yellow. Axis to the South, British to the North. 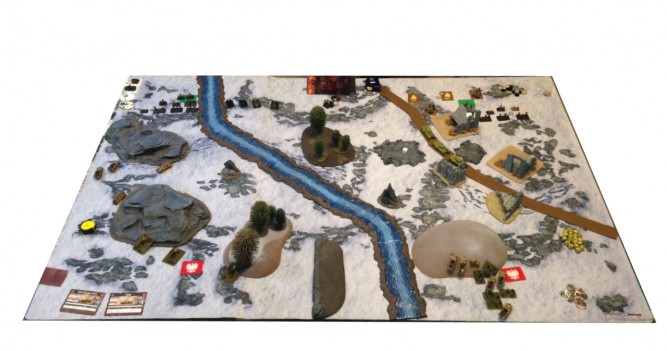 British Rifles on the eastern side of the board, led by the Churchill platoon, began moving forward, through the inexplicable blinding snow, while 6 pdrs took out one of the spearheading pumas. The rest of the Brits hunkered down, shivering in their foxholes.

The German HMG platoon moved up onto the hill overlooking the western objective and laid down mostly ineffectual fire on the dug in British rifle platoon and HQ on the far side. The Puma took shots at the 6pdrs and then scooted out of side. The Pak 40s took out one of the Churchills, while the PzrGrens moved back out of range of the remaining Churchills. 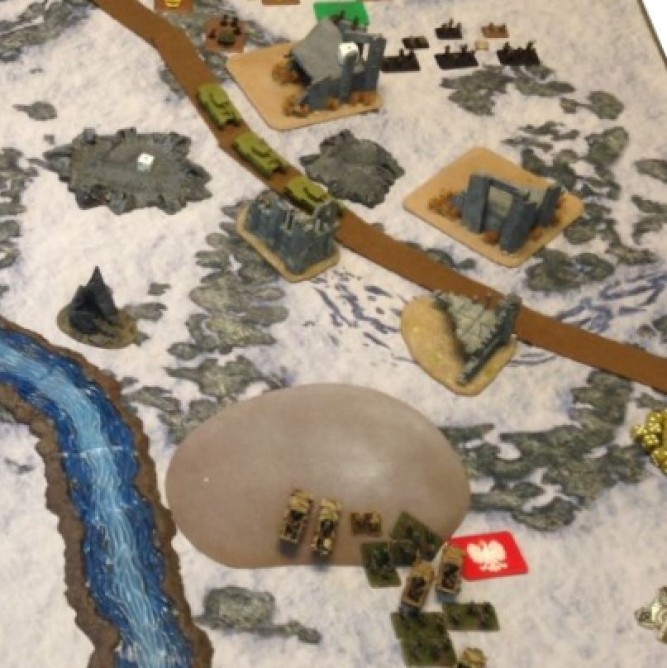 British Churchills continued to lumber forward, followed by the rifle platoon in textbook formation. British first rifle platoon on the western edge fired up at the German HMG platoon in the rocks above to little effect. British 25 pdrs ranged in on the Pak40s and killed one.

The HMGs dug in and returned fire, killing a few, while the Puma blitzed forward to shoot wildly at the British 6pdrs and scooted back out of sight. To the east, the dismounted Panzergrenadiers dug in on the objective and sent the sdkfz up on to the lee of the hill out of sight of the incoming Churchills. The Pak40s‘ shots whistled past the Churchills. For their part, the Nebelwerfers ranged in on the 25pdrs and began pounding, but only pinned them.

The Tommies radioed for help but heard only snowy static in response. To the west, the British Churchills rounded the hill, drove up to the objective and poured mg fire into the dug in PzrGrens, killing one. The 25pdrs again attempted to bombard the Pak40s but had no effect.

We too radioed for reinforcements, but none arrived. The Pak40 under the 25pdr bombardment moved south to force the Brits to re-range in, and then both Pak40s responded to the Churchills, killing one, leaving only one. The sdkfzs on the hill blitzed forward and began pouring mg fire into the approaching rifle platoon, killing many and pinning them. To the West, the HMGs continued to whittle away at the the dug in British rifle platoon and HQ, keeping them pinned down. The Puma again blitzed forward and fruitlessly fired at the 6pdrs, but could not scoot back. The Nebelwerfers again pounded the 25pdr position and killed one.

The Brits again called for help, and this time two platoons of Shermans came on at the Western corner. These moved up and fired, along with the rifle platoon, HQ at the German HMGs hidden in the rocks above, killing one, while the 6pdrs finished of the last Puma. To the east, the one remaining Churchill decided to stay on and fired into the dug in Pzrgrens, killing a squad. The British rifle platoon remained pinned down by the sdkfz on the hill. So, the 25 pdrs ranged in the on the sdkfzs and pounded their position, killing one.

German reserves finally arrived on the western flank in the form of two Tigers, who shot fruitlessly at the 6 pdrs. The HMGs in the rocks continued to whittle down the British rifles. To the east, the sdkfzs quickly withdrew from beneath Brit artillery fire on the hilltop, while the dug in pzrgrenadiers fired on the churchill with panzerschreks and at the British rifle platoon. The schreks eliminated the last Churchill while the mg teams chewed into the depleted rifle platoon, leaving only a single stand. the Nebelwerfers again rained fire on the 25pdrs, but only pinned them. 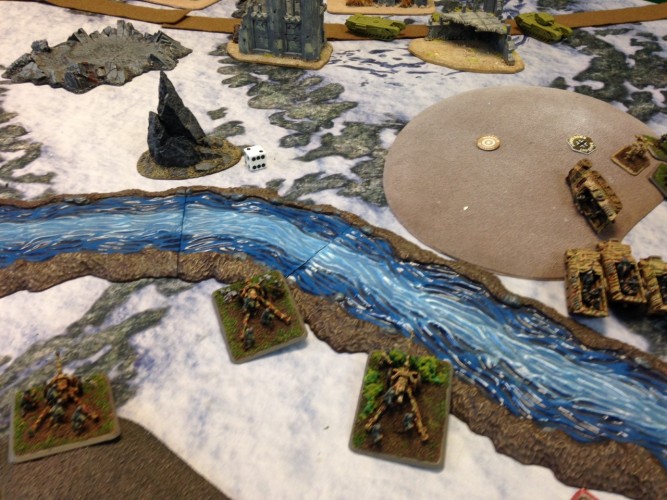 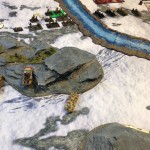 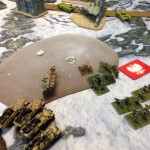 The British received further reserves, again on the Western flank, in the form of the Sherman HQ and a mortar platoon. The rifle platoon made way for the Shermans to begin moving southwards. All of the British assets, however, fired on the HMGs on the hill, killing two stands and leaving one. The British 25pdrs, attempted to range in on the remaining Pak40s but could not injure them. To east, the one remaining rifle team, stalwartly rallied and ran north towards the 25 pdrs.

With the western objective free of threats, the Panzergrenadiers, left their trenches and, along with their sdkfzs, pursued the fleeing British. The plucky Tommies weaved and dodged as a hail of bullets whizzed past them. The PAK40s began firing on the 25pdrs across the field but were unable to hit them. The Nebelwerfers for their part were only able to pin them. To the west the lone HMG team on the hill rallied and, along with their sdkfz, fired on the mortars, pinning them. 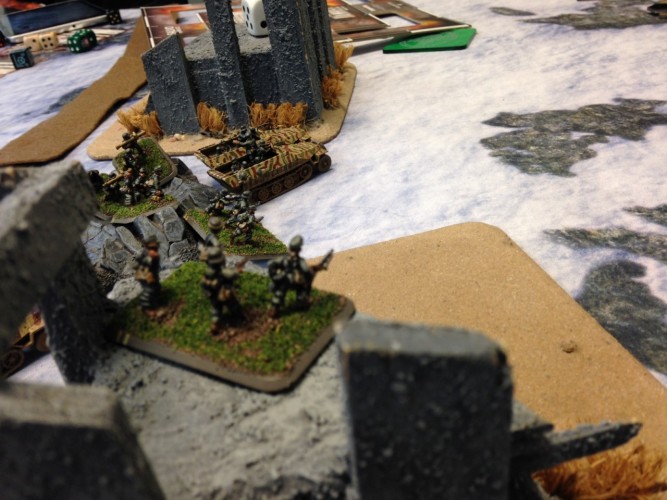 Pzergrens move up the field 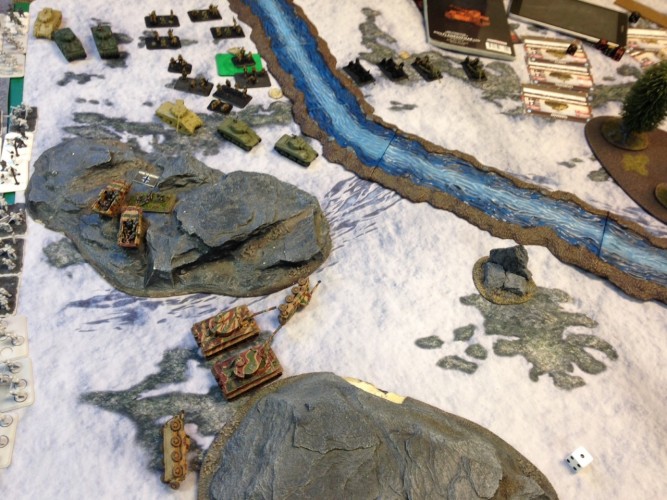 The HMGs take heavy losses on the hill but hang on as the Tigers move into position.

The British, desperate to get on an objective, moved their Sherman/Firefly platoon south into view of the Tigers, which they fired on with extreme prejudice. But they were unable to penetrate the cats. The British rifles and HQ poured fire into the lone HMG, but were unable to kill it. The 6 pdrs dashed eastward to try to gain shots on the Pzrgren platoons approaching the eastern objective. The one remaining rifle team to the east, again rallied and continued to dash nortward.
A platoon of Armoured PzrGrens arrived on the eastern flank and moved up towards the objective, while the PzrGren 1st platoon and HQ, moved up to within 4” and killed the single remaining rifle team. The PzrGrens stopped for a moment and saluted the brave Tommie riflemen’s determination. The Nebelwerfers and Pak 40s finished the remaining 25pdrs guarding the eastern objective, leaving the Germans in possession. To the west, the HMG miraculously rallied and continued to pour fire into the depleted British rifles. The Tigers took out two Shermans. 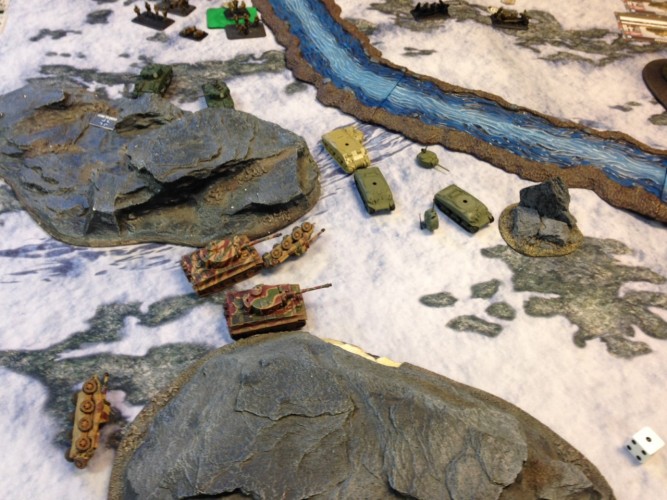 The British tanks made a futile dash for the western German objective and attempted to take out the Nebelwerfers occupying it, but were unable to hurt them. 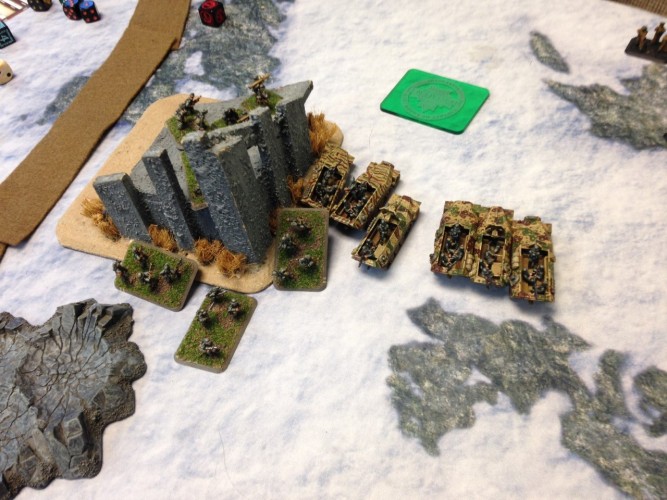