The Elites Stumble at the Worst Possible Time

With short notice from a friend willing to drive about 100 miles to get in a game, I was happy to play and finally be able to contribute a battle report for the campaign. For added flavor we did the Race to Paris mission, and I was on the brink of an 8-1 victory, until my best laid plains completely fell apart.

I went with a Panzergrenadier company and utilized the 9th Panzer Division Rebuilding card to save some points. I don’t always succeed in my Stormtroopers rolls anyway, so I reasoned it was a small sacrifice to pay to cram more units and ant-tank assets. Having an extra 5 points for every 50 fielded was a nice bonus too.

My list is attached, whereas my opponent fielded a Veteran US Tank Company: 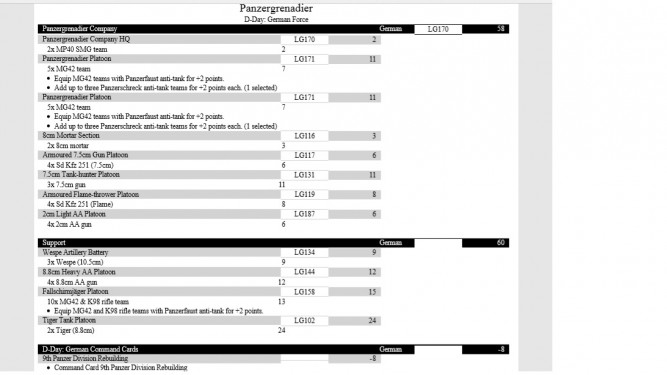 A quiet town on the outskirts of Paris 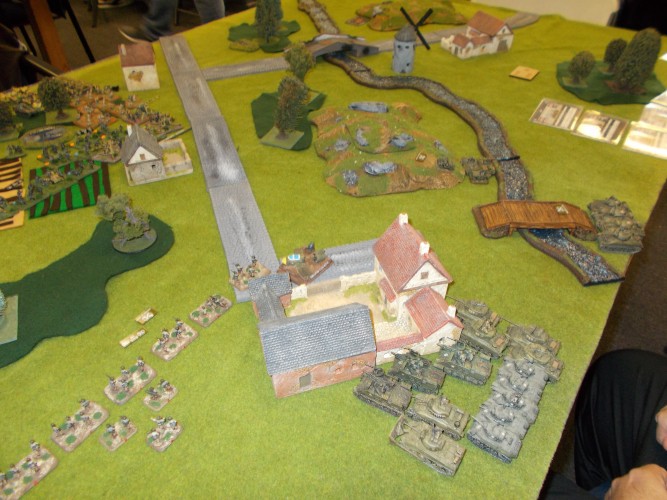 The Axis won the roll for the 1st turn. The full strength FJ platoon, the Stummels, and flame halftracks head out to defend the far objective. The US likewise move forces toward the center of the battlefield, hiding from the 8.8cm battery. The Priests then bombard the big Flak guns to no effect. However, the US still draw first blood with their 60mm jeep mortar killing one AA gun and one infantry team from one German pzrgren platoon, despite needing re-rolls. 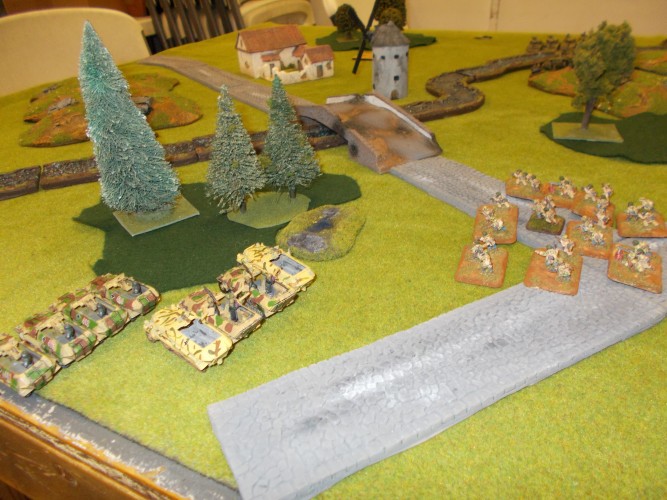 On Turn 2, the German mortar section lays a defensive smoke barrage to protect the precious 8.8cam Flak guns from the Priest battery, at least for a turn. The FJ platoon and the Stummels ensconce themselves comfortably in a defensive position on the far left objective. The Tiger platoon enters the fray at the start of Turn 3, but one tank fails to make its 2+ cross check to enter the cover of some woods, and the commander fails to hit anything despite seeing a platoon of 4 75mm Sherman tanks show their rear to him.

On the US side, the Stuarts attempt to flank the main German defensive line on the far right flank, but utterly fail to succeed, ultimately falling victim to the combined fire of the 8.8cm Flak guns, the Pak40s, and the lone Panzerschreck of 1st Pzrgren platoon.

Stuarts threathen the German right flank, but ultimately get wiped out instead

The flame halftracks detach from the left flank kampfgruppe to barbeque the US recon platoon and spectacularly succeed with 3 kills. The 60mm jeep left behind fails it Last Man Standing roll and eliminates a template attack on the German right flank. The Wespe battery punishes the US Rifle Platoon infiltrating through the woods, killing several teams and forcing them to retreat. With the Stuarts eliminated and the opposing infantry weakened, the German infantry begin to advance to seize the opposite objective.

Not everything goes the Axis way. The 2nd Tiger fails to cross check again at the start of Turn 4, finally joining its commander on Turn 5, and the combined volley against the 76mm Sherman platoon fails miserably. The 75mm Sherman platoon wipes out the Stummels, and the M10 Tank Destroyers arrive from reserve. At the end of Turn 5, 2 of the 75mm Sherman tanks assault the FJ, one is bailed in defensive fire, the other fails its assault.

A golden opportunity is presented to the FJ platoon leader. He promptly fails his counterattack roll and turns tail. Had he attacked and successfully hit, 2 Sherman tanks would've been captured and bailed. The FJ are barely contesting the objective that goes live the next turn. 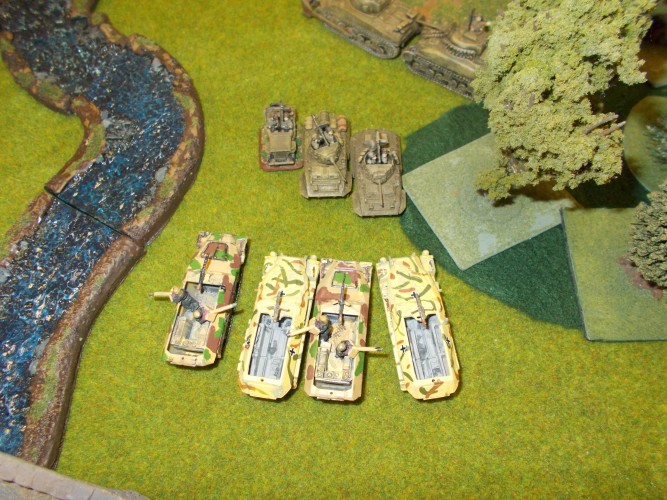 Flame Half-Tracks ready to pounce on the US recon elements 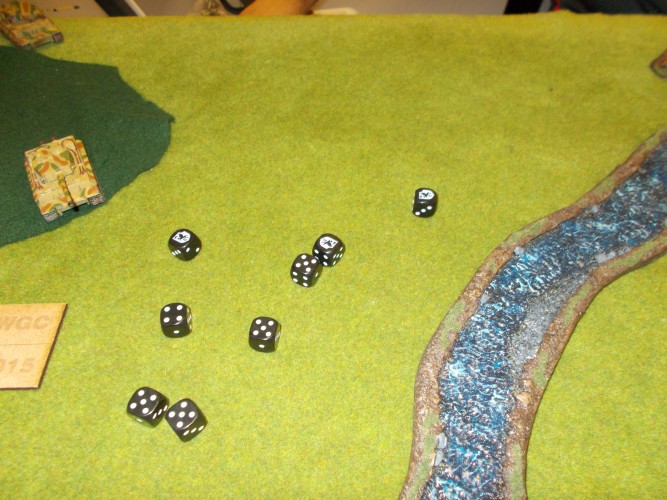 The dice roll for the Flame Attack 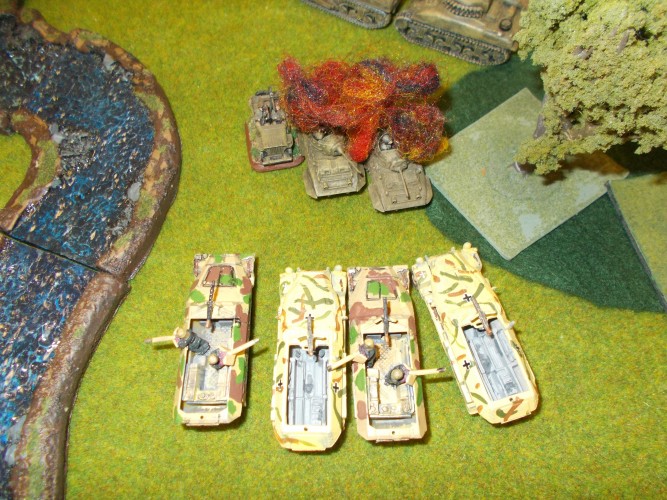 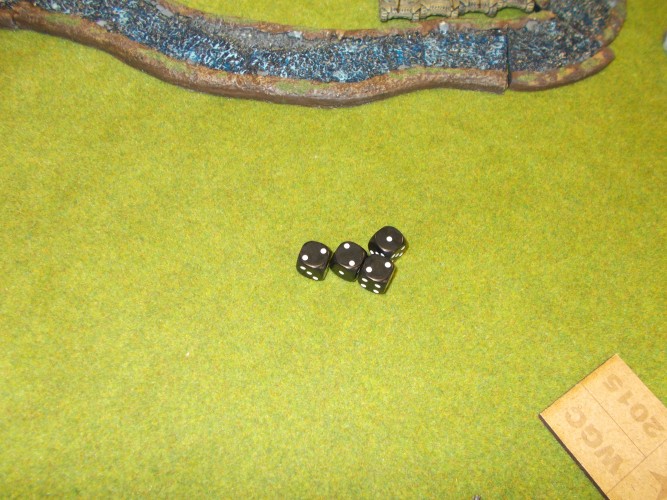 On the other hand, the Tiger tank crews either skipped gunnery training, or Speer's ammo produced by forced labor does the Wehrmacht no favors 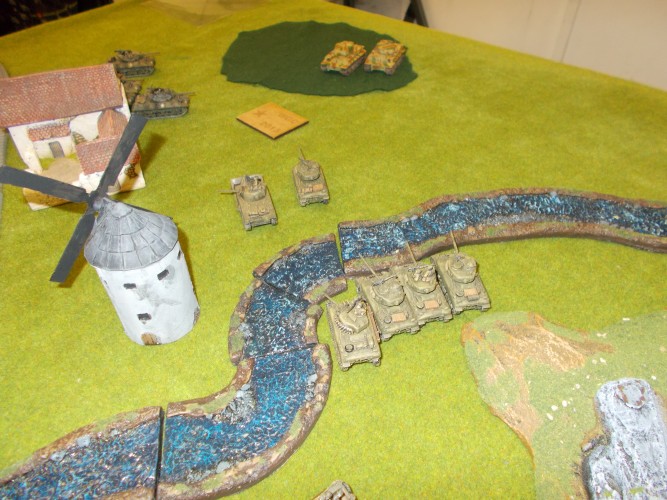 US armor desperately re-position to prevent an Axis victory

It's up to the Tiger platoon, already contesting the objective, to win the battle by killing all 3 of the US tanks within 4" of the marker. They couldn't the broad side of a barn the previous turn, and now is their chance at redemption. The mighty 8.8cm guns roar...and just 1 M10 is killed and 1 76mm Sherman bailed. The game will continue with the other Sherman platoon ready to chew on the vulnerable paratroopers.

Defeat Snatched from the Jaws of Victory

In the subsequent US turn of shooting, one of the Tiger tanks is destroyed by an M10, and lastly, to add insult to injury, the 3 surviving 75mm Sherman tanks (one had been felled by a long range 8.8cm shot) assault again, the FJ panzerfaust fails to hit in defensive fire, and again the FJ fail to counterattack! The tanks secure the objective and victory.

We both had a our share of good and bad dice, but my troops with the best statistics couldn't quite seal the deal when it mattered the most.

The US wins 7-2, losing only the Stuart platoon and the recon platoon.

After a hard fought battle, time for some healing.