This is an account of a multi-player battle that five of us conducted on the afternoon of Saturday 9th November. The game was part of an all-day gaming event at the G3 Gaming club, in order to raise money for MacMillan Cancer Charity;
There were 5 players in all 3 Allied and 2 Axis players with each player given a specific to engage. The game encompassed 6x 75pts formations with one Axis formations in immediate reserve. The players could interact with each other in terms of calling for artillery support or units engaging across sectors but the result of each sector would count separately for the Global Campaign.
The Allies placed 3 Objectives along the centre line with Axis players placing 3 objectives along the back field. The Axis had prepared positions with two ambushes but no minefields. The Axis had two areas, the advanced defences along a central strip 6” area where non-tank teams could be deployed. Then the rear defences where remaining units could be deployed.
It was decided that the forward central and right forward objectives were untenable and that it would be left to a German counter-attack to reclaim them. The forward left objective however was defended by a PzGren platoon. The bocage could prove to be vital delaying action and with any luck bog down some tank assaults and allow deadly panzerfausts to do their deadly work. It was the bocage sector that I (9th PzGrens) would personally in charge of defending against Mark’s Churchill Squadron. The right sector was defended by a Reconnaissance formation and Panzer formation in reserve.
Other infantry units were deployed amongst the houses and Vineyards leaving room for ambushing units and artillery along the backline in or behind cover. My HQ was aptly placed in the bell tower where he could direct artillery fire. The Allies formed their armoured columns…. NB the linked battle report has excellent pictures of the deployment, courtesy of M. Nisbet. 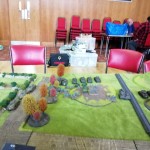 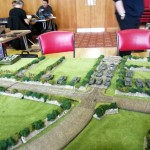 Going through the gears:

The Allies made their general advance with the Brits effortlessly charging through the bocage with fellow highlanders readying to assault the PzGrens. The US armour advanced behind the tree line leaving the Paras to take the ruin church. Meanwhile on the German front all was quite with units remaining still or lurking behind buildings. Artillery for both sides was ineffective mainly just finding their ranging points. The Brits conducted their assault on the PzGrens with the Highlanders killing two stands. The PzGrens broke-off heading towards the buildings.

The Allies had a firm grip on the central line without losing any armour assets the same couldn’t be said the infantry however. The Highlanders were forced to retreat back across the bocage after Neblewerfers and HMGs covering fire, this firepower continued to devastate the Scots and eventually rout them. Additional German artillery focused to punish the US Paras holding Church ruin causing significant casualties. This encouraged the US Paras into a death or glory charge against the Pumas under the cover of a smoke bombardment. The majority of Allied armour manoeuvred into position (inc bogging down in many cases!) or fired ineffectively against dug in infantry. There was success in destroying the forward PaK 40s via artillery and 75mm HE rounds. The Paras were successful in their initial assault suffering minor casualties in defensive fire. The wrath of the central PzGrens was not to be underestimated, countering the US Paras with ferocity and precision expected from Germany’s finest with close range panzerschreck and MG fire and a brutal assault to kill the Paras down to one mortar base (who was then killed the next turn). The term PBI was definitely coined after this turn. 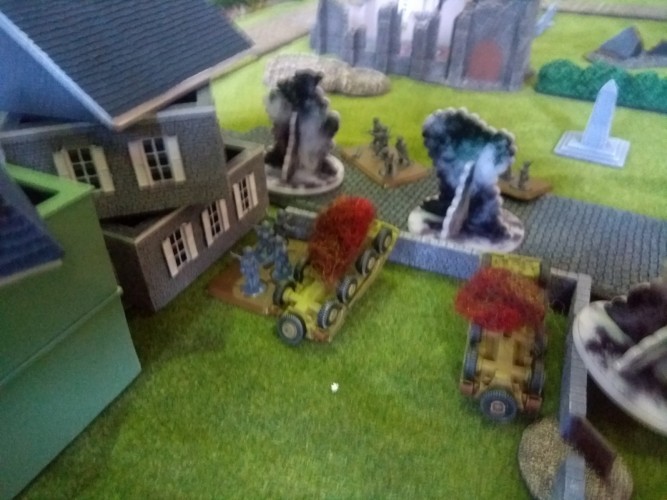 A table of two halves

With Allied infantry having been decimated it was now up to the armour to attack. The Churchills hunker along the bocage engaging in armour duels against PzIVs & StuGs or peppering the HMGs. The Churchills find little success but are otherwise impervious to return AT fire, a typical stalemate.
The more eager US burst from the tree line with M4s preparing to assault the PzGrens dug in along the vineyard and 76 Shermans taking covering positions along the hill. It was here the Germans unveiled their much awaited PaK 40 ambush (4 guns) and Tigers from reserve. The ambushing PaK 40s completely destroy the M4s and the combined fire from Tigers and StuHs reduce the 76 Shermans to one operational tank. The US recoil in the face of such onslaught, the remaining tanks retreat behind the hedge lines and call upon more veteran colleagues to help support the now collapsing flank. 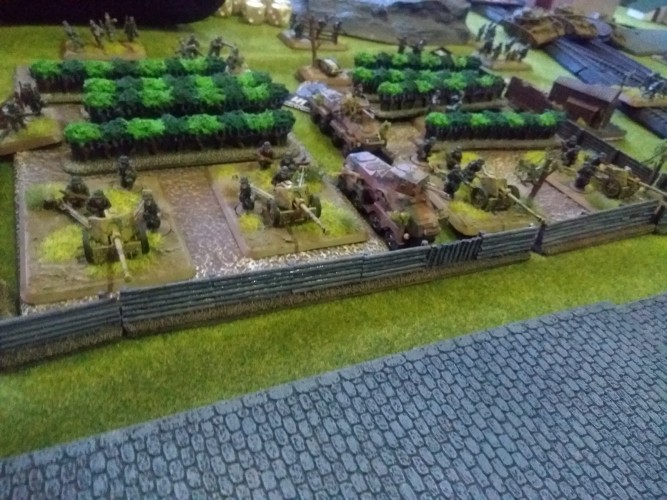 Much awaited and devastating PaK ambush 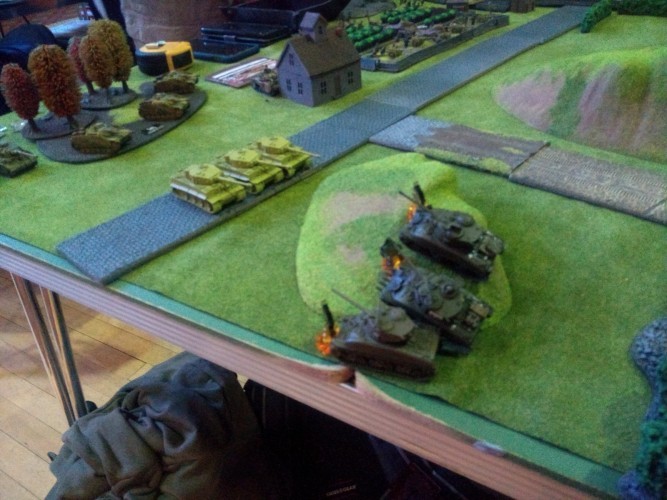 The Allies try to reverse the situation through more aggressive tank engagements from the Brits on the left, artillery concentration on the rear PaK 40s (which never amounted to anything, my co-player rolling 3+ re-rolls like a boss!) and veteran 76 engagement against the StuH causing some casualties with fire against Tigers been harmless. With the Churchills been tantalising close to panzerfaust and panzerschreck and the concentration of Panzers from reserve the German PzGrens now seen an opportunity to destroy isolated tank groups and emerge from their building positions (the Bocage blocked a lot of Defensive fire, with some kills or bailouts these assaults could kill entire platoons!). Embolden by this the Tigers and Panzers on the far right continue to press the beleaguered Americans engaging at close range. This push continues to see success and cause more causalities on the US left. The same could not be said in the British sector, the AT and panzerfaust shots fail to cause any kills or bailouts amongst the Shermans or Churchills alike. What began as attacks of opportunity to destroy isolated pockets of armour now turned into a suicidal charge, the PzGrens in the centre lose 4 bases due to defensive fire (from 5 hits!).

The end to a bloody day

The Allies now take advantage of the reckless bloodlust, the Churchills MG the exposed Pz Grens, US 105 charge the central rear obj (by the bell tower) shooting the Pz IVs at close range and on the far-right 76mm Shermans flank the Tigers. Despite the recklessness on behalf of the Germans they are not punished with Allies not been able to score many hits or fail key firepower rolls – the Tigers suffered 2 penetrating and 1 bailout rolls, with use of the ‘the lucky’ card one Pen bounced off and both firepower rolls failed! The Furher was definitely watching! With such cavalier attitude a PzGren Pl finished off some Vet Stuarts and the Tigers completely wiping out the Vet 76 Shermans securing the right flank objectives. The remaining 4 objectives were split equally by the Allies and Axis players. In my sector against the Brits the result was a draw. 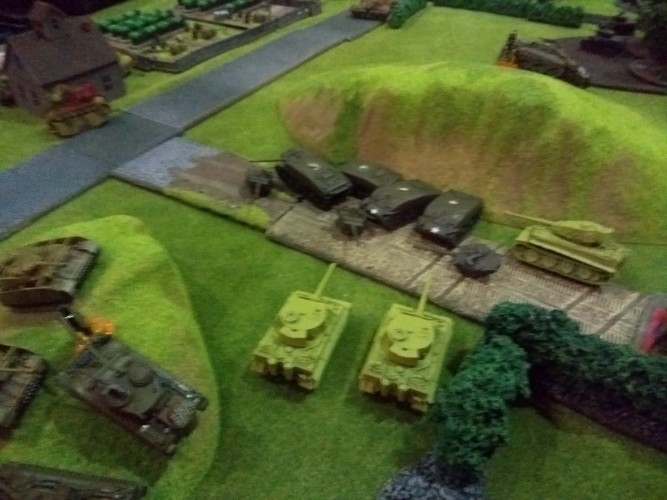 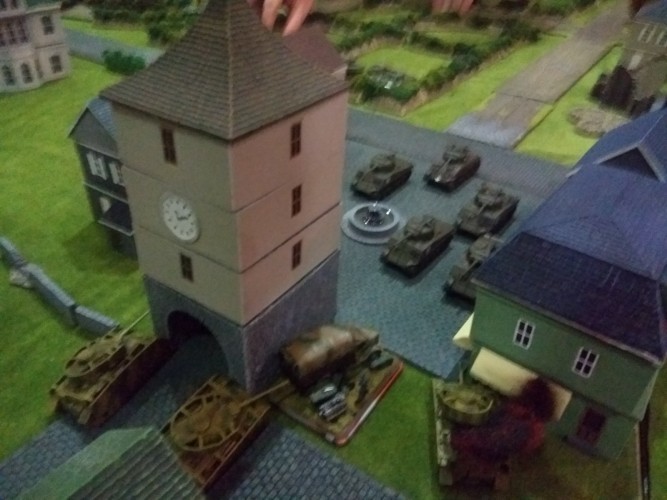 When the game started the Allies had as many tanks as the Germans had infantry bases, the amount of armour and artillery was truly terrifying! This meant that a lot of German infantry formation assets would see redundancy and we had to deploy cautiously, hence the minimal defence in the advanced defence area. Another influencing factor was the small number of infantry amongst the Allies (two platoons total). The Axis players determined that if the infantry elements were exposed early (letting them easily advance half way to then concentrate fire), remaining Allied armour would have to make tough choices attacking the rear objectives, then finally counter where appropriate with concentrated Panzers. This did work overall but not without fault.
Firstly the 88s were in ambush but the big gun rule hampered their placement, particularly in bocage and ultimately were wasted. Deploying the 88s from the get go alongside the PzGrens in the Bocage would have perhaps claimed some kills amongst the Churchills and perhaps enable more favourable panzerfaust assaults (I had no real way to kill Churchills). Additionally the reconnaissance Pl could have deployed around the church support by their Sd 250s, this would force combined-arms assaults from the U.S leading to Sherman exposure to PaK 40 rounds. Then they could ‘zip’ out of harms way via their battle taxis when things get too hot (SD 250s scout rule would come in handy). - This would also make the game more interesting as there a stalemate when the Allied infantry got butchered and Allied armour had no real answer to panzerfaust totting PzGrens in buildings. Lastly don’t rely on bailing Churchills prior to an infantry assault!!!
A great game and day had by all (well maybe not Kenny, his US armour had a bad day, cue South Park references!) and was nice to see a great looking table hosting an epic battle.
US Sector 1- The arrival of the Tigers pushed the US forces right back, wiping out US Commander 1, and taking the right objective back: Allied Loss
US Sector 2- Despite a brave charge by the US Paras, the Germans were unable to push back onto the objective: Draw
British Sector (My sector)- The Churchills were unable to push into the town, but claimed the middle objective: Draw

PS. Also check out LucasHW battle report under St Lo, he commanded the U.S centre section that involved some of my units.