Got a game in with my wife this week, thanks to thefatmanwalks to leaving his US force here while the campaign is running. I've been reading the comments on my battle reports, so for this weeks bocage table I've made an attempt to make the bocage less square. I've also got thefatmanwalks to glue his para's to their bases :). 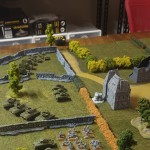 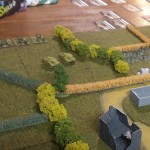 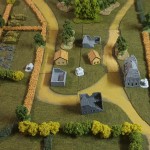 The US Stuarts advance up to the bocage on the outskirts of the township, securing a vital point of the area while keeping themselves concealed. While the bulk of the US force cautiously advances on the sleepy town, the Armoured Rifle Platoon loaded in their M3s push rapidly for the centre of town spearheading the US assault.

The German's advance in a line aiming to apply a solid line of fire in order to push the US away from this vital crossroad that the village is nestled on. The Panzergrenadier platoon move up and prepare to dig in on the outskirts of town on the objective. The Pazner 4 HQ spots for the Nebelwerfers and the German artillery manages to bailout one of the US halftracks. Then along with the StuGs the tanks attempt to do some damage of their own, but they fail to hit the oncoming US vehicles. 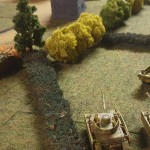 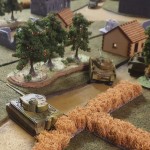 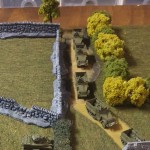 The bailed M3 crew refuse to remount, so the rest of the unit continues the push toward the centre of town. The M10 unit head off to the left flank of the US advance. The HQ unit of Sherman tanks begins to fire across the way at the advancing Tigers accepting they have a slim chance of doing anything to them, but providing a handy distraction as a unit of 76mm Sherman's appear amongst the woods and with their flanking fire manage to destroy one of the big German tanks.

With the appearance of the flaking US Shermans the Panzer 4 HQ unit moves to reinforce the lone remaining Tiger. The rest of the German line continues to advance on the village, though the StuGs have some issues getting over the hedges. The lone Tiger gets it's revenge easily destroying the 76mm Sherman it can make out through the trees. Unable to see any targets in the woods the Panzer 4 shifts it's attention to the distant M7 Priests and leaves one of the vehicles a smoking wreck. On the other flank the SD Kfz with the 3.7cm gun snaps a shot off at the trailing M3 destroying the vehicle and leaving only one bazooka team to crawl from the wreckage. The Nebelwerfers fire another salvo but this time the M3s manage to weather the fire with no effect. 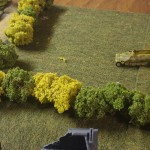 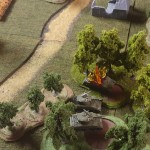 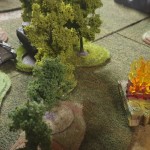 The M3 crew still refuse to get their vehicle moving, so the rifle platoon disembarks and sends them off to the rear. The Sherman HQ continues to try to bail out the last Tiger, but has no luck against the armoured behemoth. The now disembarked bazooka teams begin to fire at the German armour, bailing out one of the StuGs and destroying two of the German half-tracks killing three of the Panzergrenadiers they were transporting.

Leaving the burning wrecks behind them, the Armoured Panzergrenadiers continues to push toward the crossroads. The Nebelwerfers fire again on the now disembarked US infantry and pin them down. However the rest of the German fire proves to be completely ineffective most failing to even hit the oncoming US. 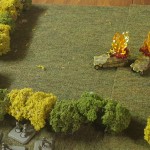 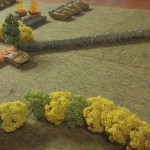 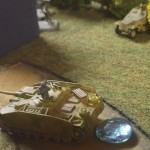 The US Paratroopers begin to advance on the central objective now that the rifle platoon is getting bogged down. In the trees the 76mm Sherman tanks continue to attempt to advance and this time one of them manages to navigate the wooded confines gaining sight of the Tiger tank again. Again the Sherman HQ merely rattles the tank and this time the 76mm shell fails to penetrate the Tigers armoured form. The Stuarts having seen the German half-tracks heading toward the central objective point open fire killing one them, though the riflemen and their bazooka fail to have any effect. Meanwhile on the left US flank the M10 destroyers leave two of the Panzer 4's across from them wrecked.

In an impressive display of speed and strength the Tiger tank flanks the 76mm Sherman and while it fails to hit the enemy tank it successfully falls back across the bocage hedging ready to strike again. The Panzer 4 HQ begin to apply pressure on the US riflemen, but it's the Nebelwerfers are the real heroes of this exchange pinning the riflemen and killing two of the speciality teams. The lone Panzer 4 begins to revenge his destroyed unit, managing to kill two of the M10s on it's own. 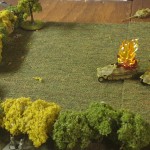 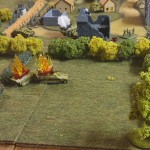 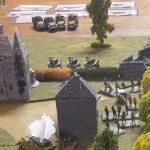 The US Riflemen continue to refuse to advance toward the centre of the village and the awaiting Germans. The fourth M10 moves up to the bocage to join it's remaining ally. In the centre the Paratroopers continue to move on the objective. The M10s finishing off the remaining Panzer 4 leaving their advance on the German flank currently unopposed. The Priest push in on the rear of the Panzer 4 HQ unit, but in their haste they fail to hit the German tanks.

The Armoured Panzergrenadiers blitz up onto the central objective seeing the US getting closer. The remaining German armour all blitz forward as well seeing their hold on the ground getting a little shaky. The Tiger and one of the Panzer 4s destroy the M7s while the other Panzer along with the StuGs and Nebelwerfers kill a couple more rifleteams and a bazooka team and continue to keep the US infantry platoon pinned down. The Panzergrenadiers begin to fire at the advancing US paras killing the closest team. 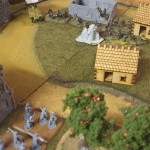 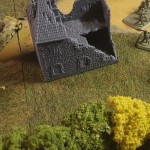 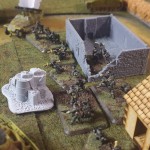 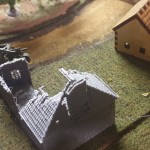 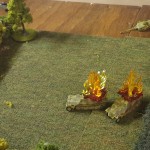 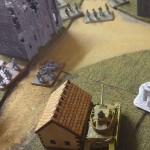 Once again the Riflemen don't unpin. They are ordered to dig in, but they fail to effectively get anything done. The M10s begin to swing up on the flank and the Paratroopers rush the central objective. Too far away now to have much effect the Sherman HQ continues it's futile attempt to bail out the distant Tiger. Again only a single 76mm Sherman manages to navigate the forest but fails to hit the German tank. The machine guns of the Stuart tanks devastate the German Paznergrenadiers killing 3 of the teams and pinning them down.

Shaking off the pinning the Panzergrens, StuGs and Pazner 4s unload into the US Paratroopers killing two teams and pinning them down. The Tiger fires at the 76mm Sherman but fails to hit the tank in it's woodland shelter. The Nebelwerfers continue to rain down on the Rifle platoon killing another team. Feeling themselves getting flanked the German's decided it was time for a gamble and the Panzer 4 HQ charged into Paras, one of the tanks was unable to contact the enemy as a bazooka shell sent the crew bailing out and while the other managed to kill a Paratrooper team the US infantry not wanting to leave this town in German control viciously counterattack the remaining tank and in short order the German tankers are captured. Seeing this the StuGs advance on the US troops and while one falls to US bazooka the other gets bogged down in a protracted combat as team after team of US soldiers are cut down by the German destoyer until finally the crew decide it's not worth the risk to themselves or their vehicle and pull back leaving a mauled but functioning US unit still contesting the crossroads. With no other options now open to them the German's risk it all and the Panzergrenadiers mount their own assault surviving the defensive fire and after some more protracted and brutal conflict drive off the single remaining mortar team and consolidate back onto the objective barely managing to save the day for the German force. 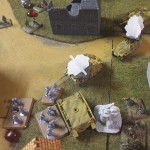 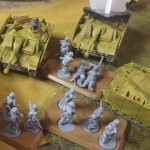 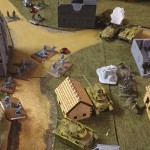 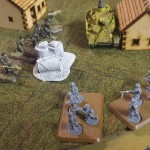 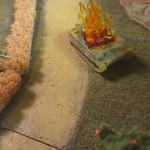 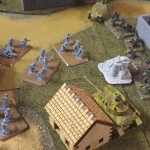 Well the wife loved the game, though she has decided she's decided that the US aren't the faction for her. I now have to head up to my brother's at some stage and borrow his Brits for her to try :).