Managed to fit in another game and definitely flowed quicker and smoother on the second play through.

As the off shore barrage ended the US began their assault on the beach, however their landing craft had trouble with the currents and only one craft had any success making the shore, disgorging it's M3 Half-tracks who began trying to lay down some covering fire against the German defences. Recovering rapidly from the preliminary barrage the German defenders opened fire and the 88s left two of the assault vehicles smoking wrecks and driving the crew out from a third. 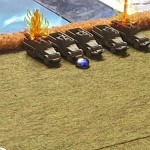 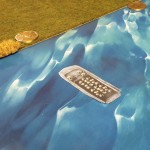 Both US landing craft break through to the beach this wave, with the Infantry moving quickly behind the sea wall. The M7 Priests however have trouble disembarking leaving the others in a precarious position. The M3s do their best to lay down covering fire, but the Nebelwerfers range in on half-tracks and their salvo manages to take out another vehicle and has a devastating effect on the men behind them. 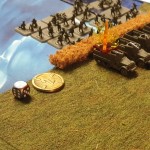 The Priests manage to disembark this turn and come out firing attempting to destroy some of the German fortifications and while one of the bunkers is indeed destroyed. The remaining French Turret and the combined fire of both 88 teams destroys the american unit before it can have too much effect on today's outcome. While this is happening the US landing craft desperately attempt to return to sea to continue the assault however only one craft manages to leave the shore.

Meanwhile the battered Infantry unit piles as many men as they can into the only crewed half track remaining and move forward in an attempt to put pressure on the Nebelwerfers. Seeing them heading their way they attempt to range in on the oncoming threat along with the two mortar pits, but no one is able to find their mark. In the German back field reinforcements begin to arrive in the form of a HQ unit of Panzer IVs who seeing the incoming assault on the German artillery unit move up at full speed in support. 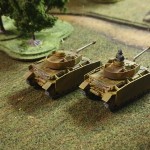 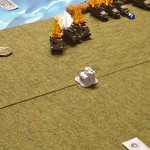 Terrible luck continue to plague the US landing as the incoming Sherman's fail to make it to the beach and the remaining landing craft remains stuck fast. On a positive note the remaining M3 crew find their nerve and begin to transport another wave of infantrymen forward as the first 3 teams disembark and begin to form up to assault the German Nebelwerfers. Their attempts to soften the crew before their assault fails to have any effect so the men charge forward on the German position leaving one of the guns without a crew. However the unexpected counter assault from the remaining German soldiers drives back the US attack.

Shaking off the assault the German men pull their guns back behind a nearby stand of trees clearing the way for the advancing German tanks who open fire with their machine guns scattering the US soldiers as the 88s open fire again from across the way killing yet another half-track. 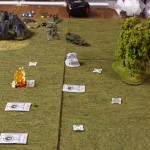 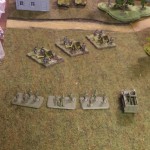 The Sherman's make it ashore despite the best efforts of the current and the surf, however as they disembark the US are left with both landing craft stuck in the sand. Seeing the distant 88 bunker they quickly head out of it's firing line attempting to score some hits on the more mobile 88 unit but fail to fire effectively.

The Germans are reinforced again with a platoon of beach defence grenadiers who move without caution straight up the road toward the distant objective thinking to dig into the surrounding houses. The 88s adjust and return fire at the newly landed Sherman HQ unit but fail to hit effectively for the first time this assault. The Nebels and the Panzers continue to move toward the centre of the German line ready to redeploy to respond to any oncoming allied threat.

Still the US assault is hampered by bad luck as the landing craft remaining ashore. The US infantry platoon breaks from the German pressure and either surrender or disperse down the beach. However a unit of M10s arrives from a nearby breakthrough to assist in the assault and seeing the green German infantry out in the open attempts to cut them down with machine gun fire, however it seems fate has other ideas today and only a single German team is cut down. The Shermans continue their advance on the German line, behind a cover hill.

With no other option available to them the German infantry decide to trust in their Panzerfausts and the open tops of the US tank destroyers and charge toward the oncoming vehicles. Their wild fire as they charge in proves to be effective as a M10 catches a lucky shot from one of the one shot anti tank weapons and is destroyed. As they close the gap another German team is felled by the machine guns but the remaining teams contact the US soldiers and another vehicle is left wrecked as the crew bails out of a third. This proves to be too much for the remaining viable crew and they quickly disengage leaving their unit mates to surrender. 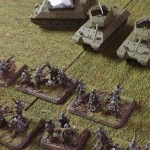 A unit of 76mm Shermans arrive from the rear to attempt to assist the now tattered US assault as the remaining M10 leaves the field. Down on the beach one of the landing craft finally manages to head back out to sea. Separated by the German forces the two Sherman teams decide on a do or die approach and begin to head toward the US objectives. The HQ unit heads out from behind the hill firing at the German 88s as they come but again to no effect. The 76mm Shermans try to push on the Grenadiers and during the assault manage to take out a third infantry team, though again their panzerfausts prove effective killing a tank before being driven back.

Deciding that the Shermans seem a little too solid for a frontal assault and knowing that there are panzers deployed the Grens head into a nearby wooded area hold their ground. Some mortar bombardments distract the 76mm Shermans for a moment as the Panzers appear on their flanks and manage to bail out one of the tank crews. The German 88s also return fire against the Shermans assaulting their position and manage to destroy another US vehicle. 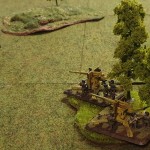 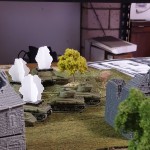 Finally the US beach assault seems to have sorted out their issues, with the remaining landing craft getting off the beach and the other returning with the M5 Stuarts. However it seems it is too late to salvage the allied attack. Faced with the Panzers on their flanks the remaining 76mm Sherman leaves as the bailed out crew raise their hands in surrender. The Stuarts rush to support the remaining Sherman from the force HQ but while they do manage to finish off the remaining French Turret bunker they are not enough as the German force again all begin to look toward the beach. The remaining time left in the battle sees the US forces streak of horrible luck continue as the German's move forward and grind them down between their guns and the uncaring ocean. 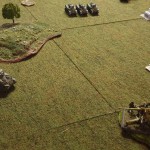 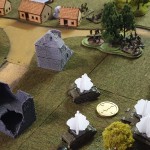