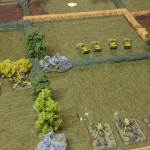 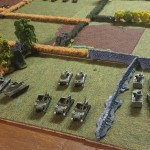 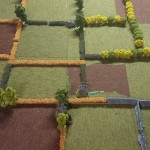 My opponent and I have not fought across a bocage table before so we set up what we interpreted to be ideal with what limited resources I had to hand. Areas in the hedging with gaps where agreed on to be gated areas. With that done we deployed and prepared to play.

The US assault began with a rapid advance toward relatively undefended objective points. The allied troops made for gates where they could, but otherwise the larger tracked vehicles simply made or attempted to make their way over the obstacles.
Most of the German forces held there ground waiting to see where the US force would focus their push but seeing a golden opportunity the German 7.5cm anti tank gun crews revealed themselves from ambush at the approaching Sherman HQ unit and as the smoke cleared two smouldering wrecks caught up in the opposite hedges were all that was left of the Allied tanks. The Nebelwerfers unloaded a salvo of rockets off toward the unit of 76mm Shermans but their fire rained harmless down on the closed tops of the vehicles. 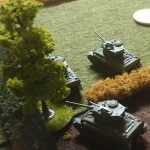 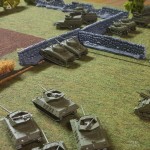 With the first shots of the game fired to deadly effect the US advance continues with the Stuarts and M10s moving up on the now revealed German gun team with guns blazing. Their combined fire manages to destroy one team and as the shells start falling from the M7 Priests the threat posed by the anti tank unit is neutralised. The M3's now having advanced up to the next line of bocage spot the German 88s and fire their machine guns at the distant targets but are not rewarded for their efforts. On the far side of the engagements the 76mm Sherman's advance has yielded them targets of their own and the larger American guns fire driving one Panzer 4 crew from their vehicle but to no other effect as the other two tanks miss the soft half-track targets.

The brave German crew quickly remounts their vehicle and the team focuses their fire against the opposed tankers, leaving one of them destroyed and another crew bailed out. Across the fields the 88s open fire on the M3s easily destroying the lead two transport vehicles killing several of the now rudely disembarked US infantry teams. 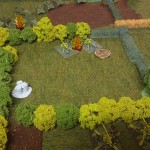 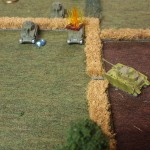 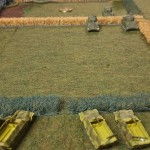 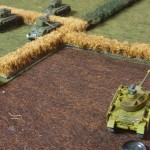 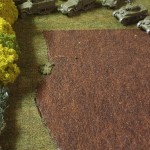 The bailed out Sherman crew hesitate to return to the vehicles and this is enough for the other crew who withdraw from the field, recalling the Stuarts as they go. The remainder of the US force continues it's drive forward with all their hopes now pinned on the closer of the two objectives. However the dug in German troops continue to resist their attempts to dislodge them from their positions.
With a rumble of engines the German position is strengthened with the arrival of another unit of Panzer 4s. Spotting the M3s and their rifleman passengers within spitting distance of an undefended objective the Panzergrenadier unit dismounts from their transports and as some of the German infantry take positions against the bocage the others spread out managing to get a token force in range of the objective. Some lucky firing from the combined German forces manage to take out another couple of US half-tracks and pin down the surviving infantry potentially stalling the advance, but would it be enough? 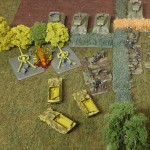 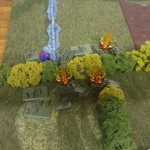 The US infantry refuse to move toward the German defensive time buying the axis soldiers more time to re-position as the allied soldiers instead dig in to their current location. The M10s risk their open tops advancing forward in an attempt to clear out the German infantry getting ready to secure the objective point. As the Priests begin to advance as a temporary break down in communication means they have no way to range in on a target the M10s open fire pinning down the German infantry and killing two teams.

The last of the German reserves arrive on field as the veteran german soldiers shake off the effects of the US fire and prepare to mount an assault. Trusting in the Panzer 4s and Nebelwerfers to keep the US infantry pinned the Panzergrenadiers open fire on the M10s with their panzerfausts and panzershreks managing to bail out two of the tank crews. The following assault leaves one more German team dead, but they manage to destroy a third M10 driving off the fourth and capturing the remaining two crews.

Another unlucky open to the turn saw the US riflemen unable to shake their pin and the last remaining M10 retreat from the field of battle. The US commander tried to pin down the Panzergrenadiers in order to keep the objective German free, but unfortunately for him the M7s were unable to range in successfully.

Free to move the Panzergrenadiers blitzed across the field finally getting German bodies down around the objective point and with no other targets in sight the Nebelwerfers, Panzer 4s and the German infantry opened fire on the dug in US troops. Two more teams fell to the German fire, including the only one currently contesting the Axis victory.

Do or die now for the US and finally the riflemen manage to shake off their pinning. Deciding on some rather aggressive tactics the infantrymen charge from their foxholes guns blazing, and successfully assisting the M7s to range in on their German counterparts. However they are unable to pin down the veteran German troops and pushing their luck further than they possible should have they risk an assault. Their failure to successful pin the Panzergrenadiers is there downfall and not only is the charge halted, but four of the remaining teams are cut down.

With the last of the US infantry platoon stranded against the thick hedging the German guns bark again cutting down the last of the brave US soldiers and throwing back this wave of allied assault.

Reflecting back on the game it really felt like I got lucky this time, I deployed terribly and if not for my opponents terrible dice pretty sure I would have paid for it. I've definitely learnt to respect the staying power of dug in infantry after this game though. 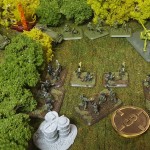 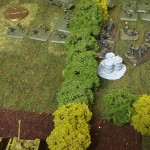