Pushing them off the Hill

Managed to squeeze another game in this week against Thefatmanwalks again. He was busy gluing this week and brought a few more Shermans with him, bringing our games up to 125 points this week. 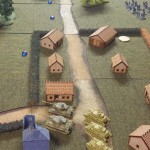 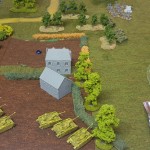 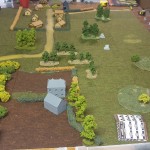 The German's attempt to apply pressure early, but a failed blitz order on the Tigers and cross check from the Panzer 4s on the other flanks stalls that rather quickly. On the left German flank the Tiger's shots go wide, though a second unit of Panzer 4s manages to kill one on the US Sherman tanks.

The 76mm Shermans that had been placed in ambush appear to contest the Tigers and with a stroke of luck the M10s arrive on the same flank. With little to support them the M5 Stuarts quickly move behind a hill before the Panzer 4s can get an effective firing solution. The M4 observer tries to take out the German 7.5cm guns but is unable to hit the dug in unit, however the mortar team in the US Paratrooper platoon does manage to take one of the guns out. Over on the flank the fresh M10s destroy one of the Tiger tanks while the combined fire from the Sherman units manages to bail out the other. 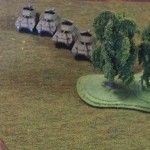 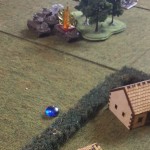 The Tiger crew return to their tank, while once again the distant Panzers fail to get moving as they get caught up in the hedges again, however two of them manage to gain site of the US observer tank, though they fail to hit it. The 7.5cm gun and a platoon of Panzergrenadiers start to try to get some suppressing fire on the US paras but they aren't effective enough to phase the US soldiers. The Panzer 4s open fire again and manage to destroy both a 75 and 76mm Sherman. The Tiger misses it's target once again and scoots back into the partial concealment of the roadside hedgerows.

No reserves arrive this turn to strengthen the US line. Seeing the difficulty the German tanks are having getting moving the M5s find their courage and move forward to engage the approaching German infantry platoons. The observer guides the shells of the M7s down onto the German Panzer unit caught up in the hedges but they fail to have any effect on the armoured vehicles. The US tanks machine guns begin to fire at the German Panzergrenadiers but are unable to effectively fire through the covering orchard. On the far sides the M10s have no luck against the Tiger, though the Sherman units have some success with the 75mm unit managing to knock out one of the German tanks. 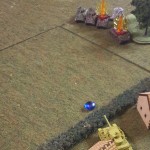 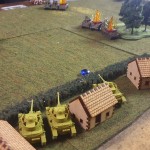 Despite still being hampered by the hedgerow from hell the Panzer 4s manage to snipe one of the M5 Stuarts destroying it. The Armoured Paznergrenadiers begin to push toward the objectives in their halftracks. The foot slogging Grenadiers push up and bail out the Sherman Observer with a well placed panzershrek shot. While the machine guns mounted on the German half-tracks pin down the Paras trying to cover their own advance. On the German left flank the Panzer 4 unit finishes off the 75mm Shermans while the Tiger finally finds it's mark leaving two of the US tank destroyers destroyed.

The crew of the bailed out solo Sherman fail to remount, but the Paratroopers easily shake of their pin. While the rifle platoon arrives on the far side mounted in M3s another unit of 76mm Sherman's appears to strengthen the US centre. The M3s race along the road passing the Tiger and entering the relative safety of the village as the M10s return fire and manage to bail the Tiger crew again. Meanwhile the Stuarts kill a Paznergren team, as the Sherman HQ destroys one of the German transports and bails another, killing a couple of infantry teams in the process. The Paratroopers decide it's time to join the action pinning down the closer of the two Panzergrenadier units. 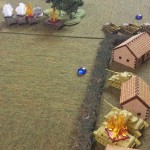 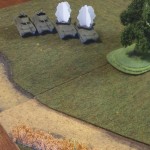 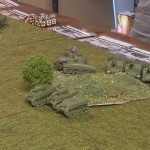 A rough start for the German's with both the Tiger and half-track failing to remount, and the Armoured Panzergrenadiers remaining pinned down. While starting to sustain some losses the US force seems to be faltering so the German's begin a rapid advance. In the village the Panzer 4s pull back from the edge of town and fire down the road at the US transports destroying one and killing two of the transported teams. On the other flank the other Panzer 4 unit destroys one of the remaining two Stuarts and bails out the crew of the other. The single remaining 7.5cm German gun fires across the field bailing out one of the 76mm Sherman tanks. The Panzer HQ unit then finishes off the M5 unit, while a panzerfaust shot destroys the Sherman Observer. The combine fire of the German infantry platoons punishes the US Paratroopers pinning them down and managing to kill a couple of teams despite their foxholes.

In the middle of the field the US begin to run into trouble with the crew of the 76mm Sherman remounts and in the heat of battle forgets about the newly dismounted Panzergrenadiers contesting the very point they were supposed to holding pulls off to provide support to the embattled Paratroopers. Seeing this the other 76mm unit steers away from engaging the distant Tiger tank and rakes the German infantry with their machine guns, and while the fire is deadly enough of the infantry teams remain. 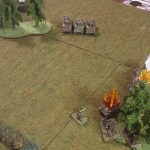 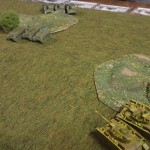 With the US under pressure the Tiger crew finally finds the space to remount their vehicle and the tattered Panzergrenadier unit unpins moving the rest of the platoon up through the woods and onto the objective. The Tiger finds it's mark again bailing out the last of the two US destroyers. In the centre both units of Pazner 4s and the 7.5cm gun concentrate their fire finishing off the main 76mm Sherman unit leaving the main body of the US formation in tatters.

Seeing themselves as the only part left of their formation the Sherman HQ sounds the retreat, leaving the field in the hands of the Germans for another Axis victory. 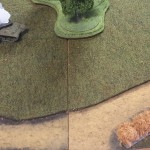 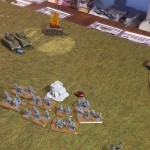