Soviets break out of the Cauldron

This is the second week running my opponent has brought Soviet Lend Lease Tanks – this time I was playing Lord T and his 21 strong Sherman & Lee tankovy army.

Scenario was Cauldron with the Soviets defending – although you couldn’t tell from looking at the board.

I would have much preferred to engage with the Shermans and Lees at long range, but the advancing Soviet armour pushed hard to close the range and were rewarded with the destruction of the first Panzer Platoon

My reserves arrived as the first platoon was destroyed, unfortunately they didn’t last much longer

After moving on, and attempting to engage with the Lees, my Panzer IV Fire was completely ineffective. Despite trying to use some concealment, the return fire from the Lees found their targets. 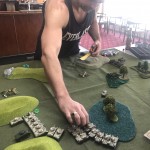 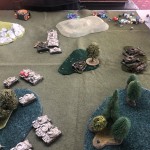 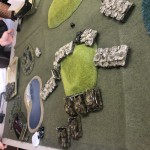 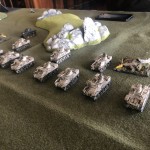 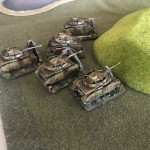