My all PzVI Germans squared off against Nigel & his British – this time Nigel took British Sherman’s supported by a Motor Rifle Platoon, 17pdrs, 25pdrs and a six strong recce cattier force.

The mission was Encounter and the British left off one of their Sherman platoons in favour of the 17pdrs and 25pdrs – the British leaving one of the objectives undefended.

I pushed hard on the undefended objective and was severally punished – with four PzIV soon burning.

A couple of lucky company morale tests and my other PzIV arrived in exactly the right place from reserve. The ensuing gun duel left one of the British Sherman platoons in ruin.

Pushing again on the undefended British objective, it was now the turn of the British for some timely reserve arrival. The Motor Rifle platoon stepped on to cover the undefended objective.

A lucky round of fire reduced the 25pdrs to one gun, and destroyed a second Sherman platoon at range….then the British carriers then arrived….

The German defence was too thin, air destroyed the German HQ and the carriers rolled onto the an undefended German objective – too quick for the German tanks to respond 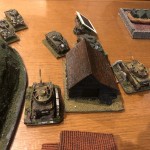 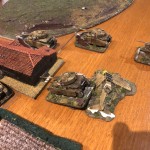 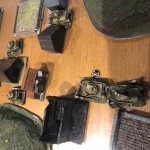