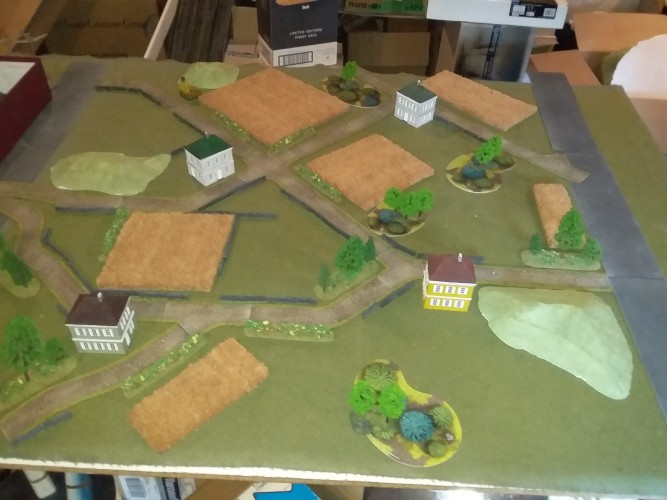 Bocage country outside Coutances. Again, we agreed that all hedges, treelines and walls would count as bocage. 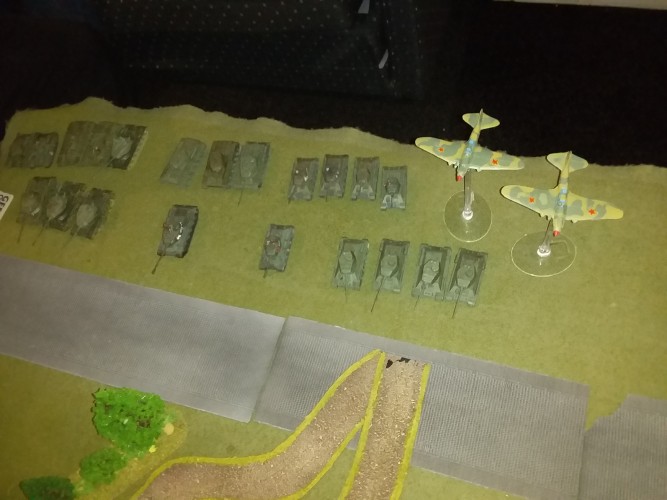 The russian force: A KV1s battalion, a T-34 battalion, and Zis-3s and 120mm mortars in support, with Shturmoviks flying high guard. 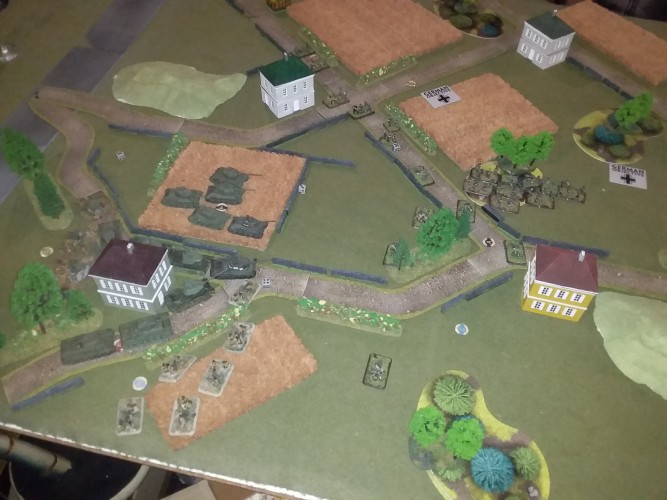 Inistial deployment. I kept my tigers, recon and one infantry platoon in reserve, with my Pak40s in ambush. Dave decided on a heavy flanking force with one KV1s company, one T-34 company and his short Valentine platoon.

In retrospect, I may have been a little over-focused on getting good sightlines for my mortars, leading me to deploy them way too far forward for their own good. 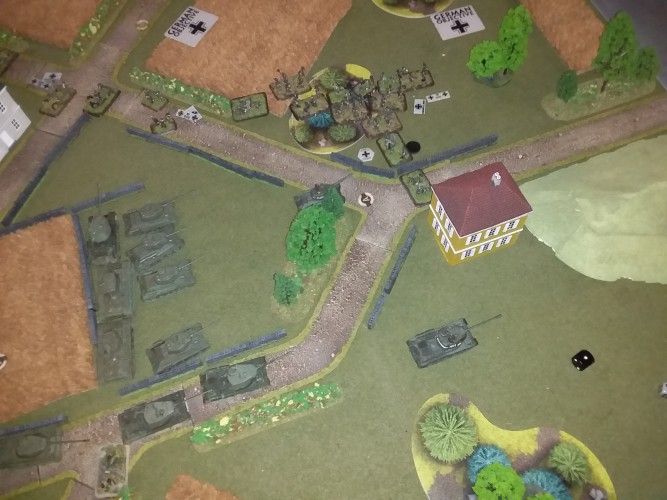 Dave opted for an all-out charge to begin with, pinning my mortars with machine-gun fire before sending his two company commanders in to assault. This left them quite exposed, expecially as he consolidated forward after killing three of my mortars, not back.

So, when I popped my pak40 ambush and was also lucky enough to get a reserves roll on my first turn, to bring on my tigers, I was able to kill the T-34 commander and bail the KV1s commander, along with two of his heavy KV1's. I also managed to call in my Stukas, who were able to bail one T-34.However, I was still quite vulnerable at this point 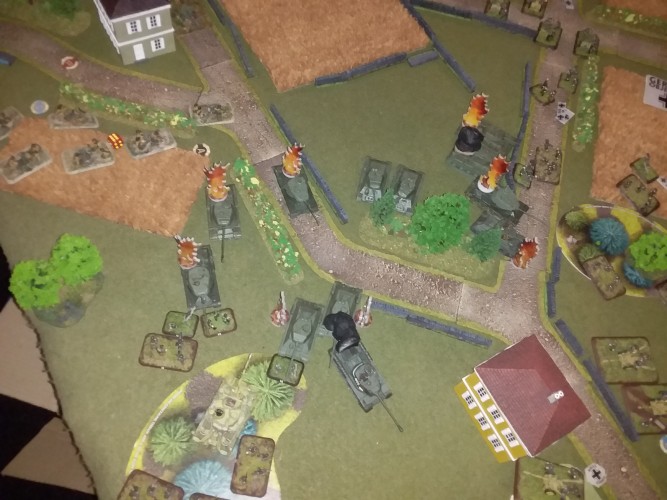 I seem to have negleacted to take a photo at the end of Dave's second turn, but he moved his T-34/85s and his KV1's up to take on my tigers, while the 76's bogged in the bocage and his KV1s'smoved over to rake the infantry platoon who had left their foxholes to move over and claim both the objectives. Little damage was done, but his Zis3's and mortars were on fire, ranging in on my paks and mortars and hitting all of them. Unfortunately for Dave, I also made all my saves. Then, on my turn, I again got a lucky reserves roll to bring on my second grenadier platoon, bailed al of his tanks but one with AT fire, then assaulted with both infantry platoons to destroy half of his tank force. 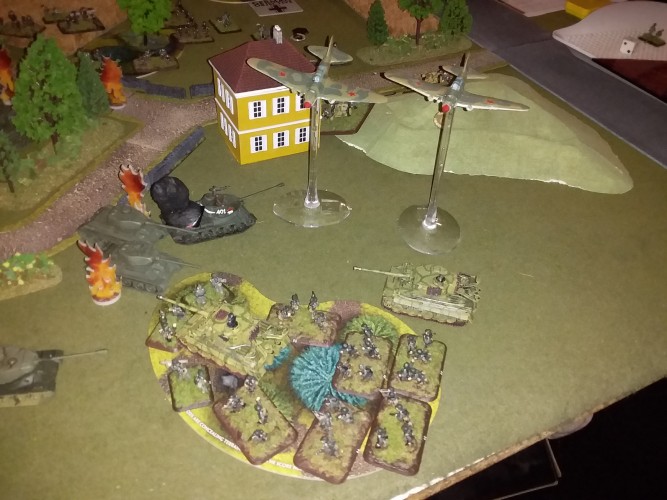 Undeterred by having his KV1 formation break, Dave battled on and, glory be, he called in his Shturmoviks, though no reserves arrived on his first roll. Seeing the chance to turn things right around in one fell swoop, he targeted my tigers and second grenadiers...........but failed to range in.

At the same time, he sent his last two tanks on the board into a mad assault on my first grenadiers, but was repulsed by two bails from my defensive fire with a pak40, a faust and a schrek. 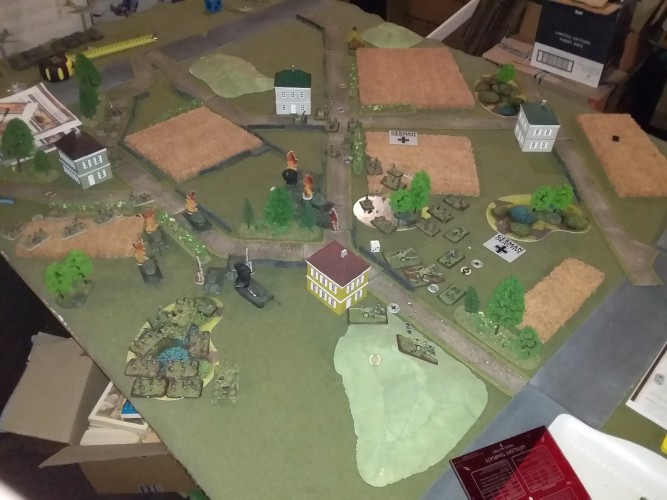 At this point, with only his pinned mortars, two bailed tanks and a zis-3 platoon on the board, and only two tank platoons in reserve, Dave decided that the writing was on the wall, took his toys and went home.

I don't think Dave did a lot wrong, as his impetuous charge had a decent charge of breaking through my defences before I could get my reinforcements on the table. However, if he was going to do that, he should have put only his Valentines in reserve and really hammered the charge home with two more tank units. I did have some incredibly good luck, getting my tigers on in the first turn, closely followed by my infantry reserves. Without them, I doubt that I could have stopped his diversion of the charge down my left flank like I did.

His other option, with three tank units in reserve, would have been to advance much more cautiously, staying under cover and taking pot-shots to whittle me down, until he was able to get his reserves on and under cover behind my lines, then sweep in on me from both sides at once.

Even so, I like my chances with my PBI and guns against the might of a mighty tank force. Meta be damned. :-)