Holding the Line at Argentan 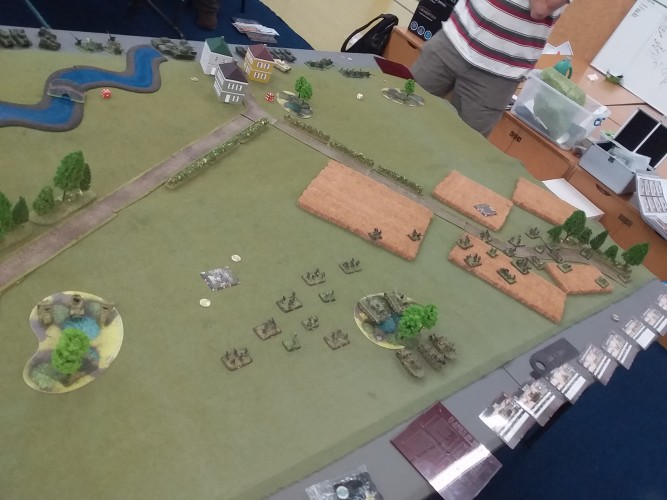 The germans dig in to protect the two avenues of advance that the ......Russians? can take to move north out of Argentan and close the pocket, taking care to stay clear of the areas that the russian artillery had been ranging in on.. 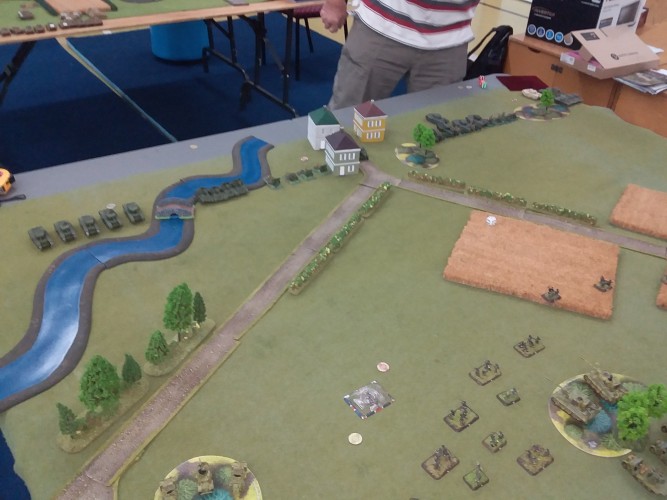 Meanwhile, the russians prepare to advance in line. Two squadrons of churchills, one of KV8s, a platoon of SU-76s and a scouting element of BA10s, supported by two 76mm artillery batteries and a platoon of heavy tank killers. 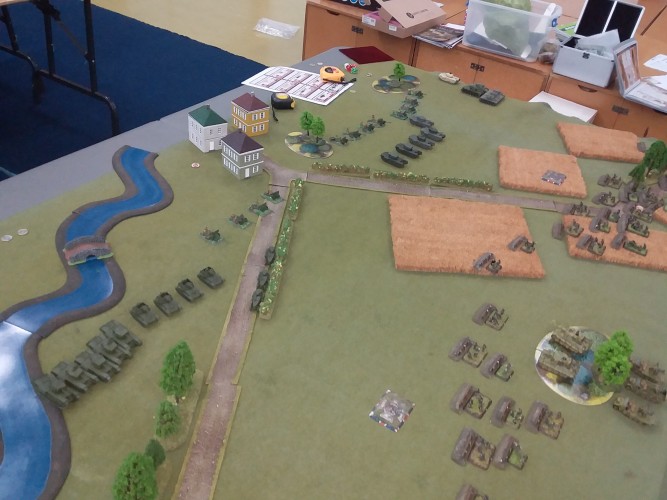 The commissar's gun fires and the russians are off, sweeping forward through the wide open steppes of Normandy, eager to crush the puny germans beneath therir treads. 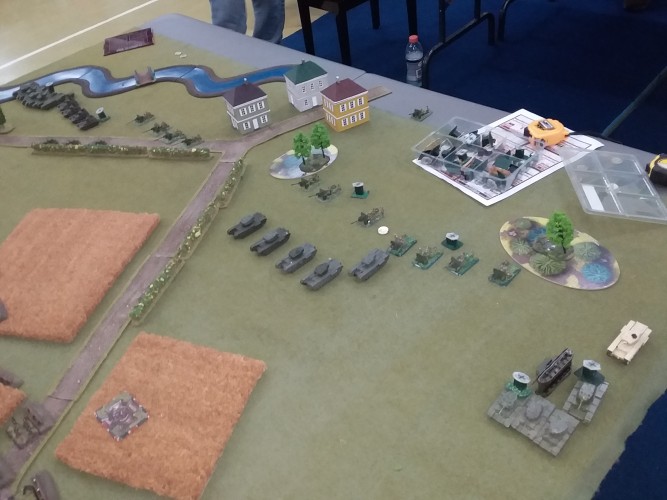 Concerned by the mess that those KV8s will make amongst their infantry if they get close enought, the Germans bring out their ambushed pak40s on their right flank and open fire. With front armour 9, there's not much chance of doing any serious damage at that range, but they REALLY don't like the idea of letting them get any closer. Astoundingly, Mark rolled three 1s for armour saves, but then I failed two of my firepower checks, so one burning KV8 and two bailed; still a happy outcome for the germans. The mortars manage to pin both artillery batteries and the IGs bail an SU-76.

Turn two and the two bailed KV8s fail to remount, even with their CO right there. The remaining two keep trundling forward and start machinegunning the paks, as do the Churchills, managing to pin them but not harm them. On the other flank, the Churchills and the BA10s between them manage to take out one scout car. 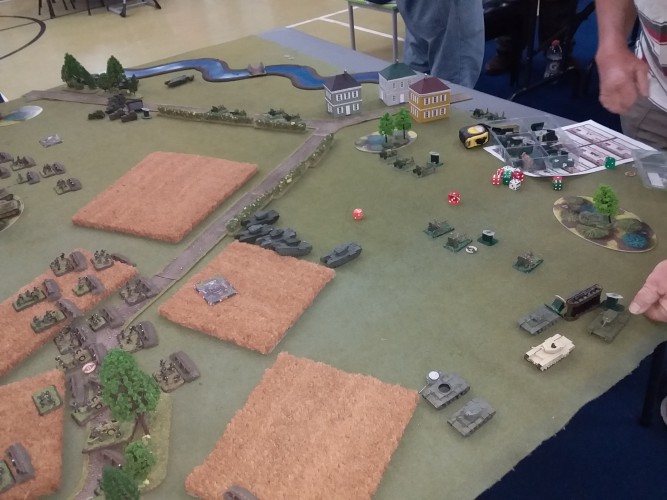 The armoured cars figure they've done their job here and leave the field to scout out the best line of retreat. The pak40s unpin and find their range, taking out another KV8. The Tigers in the woods on the German left flank take out a churchill behind the treeline. The mortars re-range on the advancing russian guns and take one out, pinning the unit again. 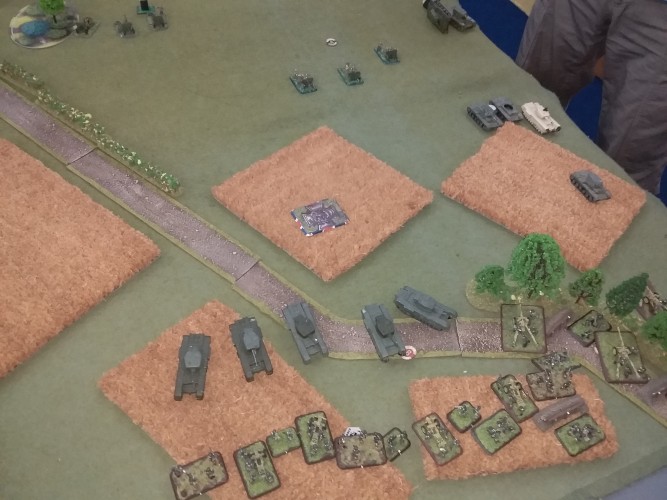 On turn 3, it looks like all might be lost for the germans, as the Churchills advance on their right-flank objective, pin the infantry with machine-guns, survive the defensive fire and assault, killing three teams and pushing the whole german line off the objective. 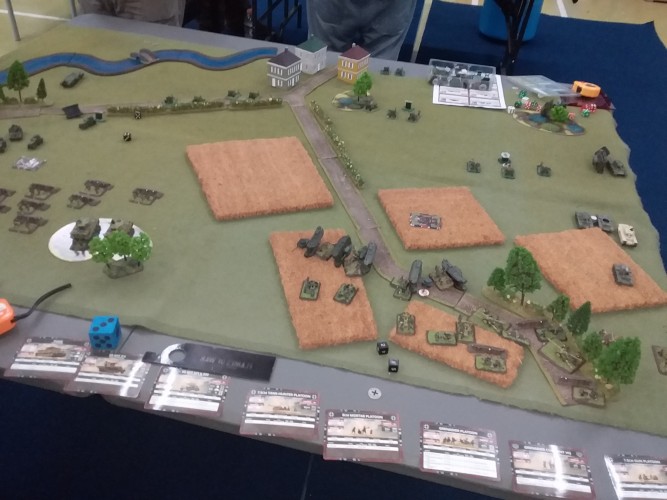 But no, all is well, as the infantry unpins, the Tigers blitz out of the forest to kill two Churchills and bail another, while the infantry and the paks together manage to kill one more and bail the last one. Then the infantry charges in and finishes off the bailed tanks, while the Tigers reverse back into their forest to guard the left flank again. The infantry takes shelter amongst the burning wrrecks of the Churchills. Meanwhile, the mortars have completely destroyed the russian's forward artillery battery. 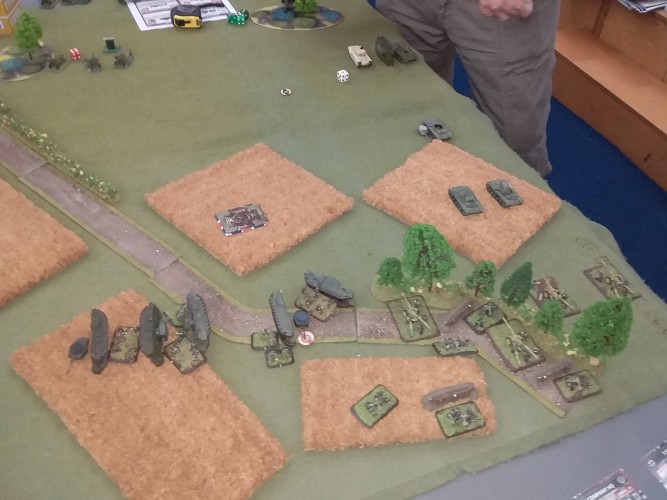 The KV8s have managed to crisp a mortar team that was dug in just a little too far forward, and the two remaining active tanks push forward again to try to get the pak40s in range. 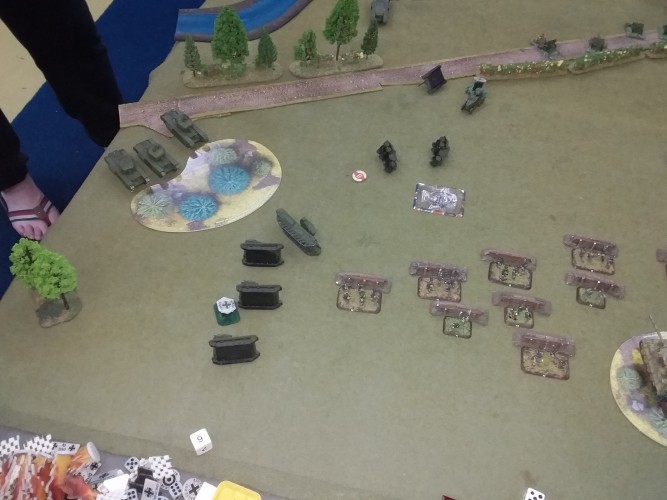 Meanwhile, over on the germans'left flank, the mobile flak were caught in the open and the remaining team retreated in disorder. The Churchills attempted to advance through the forest to assault the infantry, but only one made it through (three 1s again). The one tank who made it through decided to assault anyway and was cut down in defensive fire from the infantry. The Tigers retaliated by wiping out the SU-76s and the BA-10s 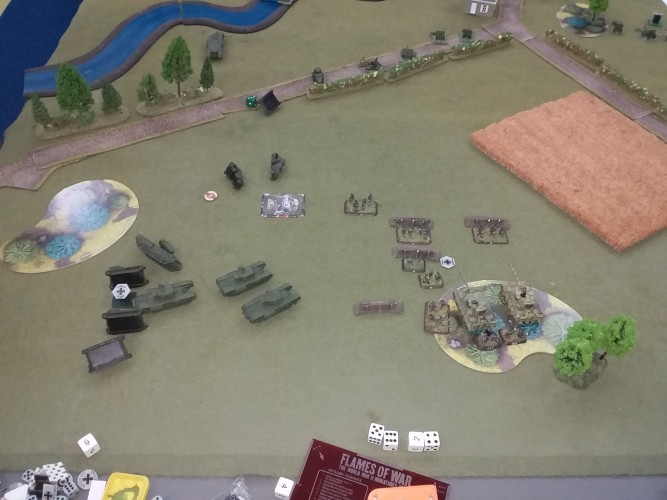 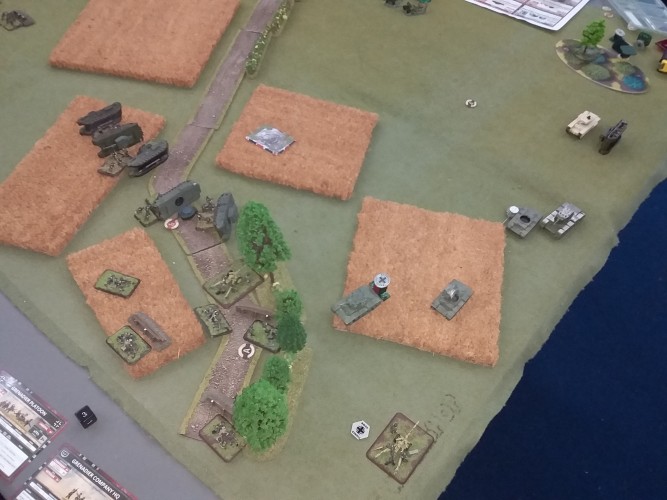 Over on the right flank, two pak40's are burned where they stand, but the remaining one, even pinned, bails the last KV8, which is then assaulted by the infantry, securing that flank. 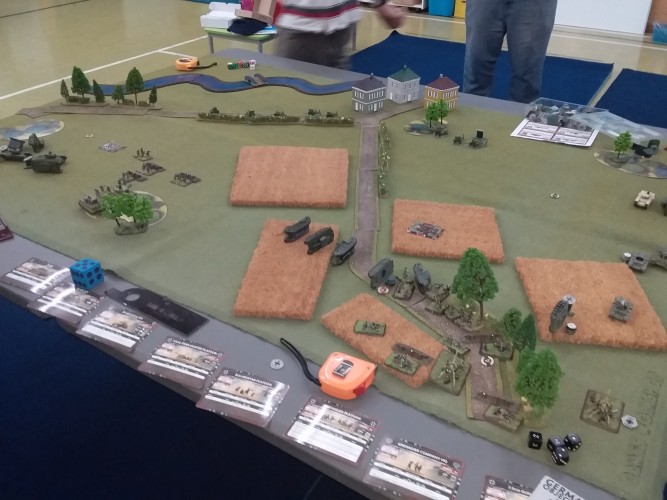 And over on the left flank, the infantry unpins and advances on the Churchills, who are then bailed by combined Tiger and infantry fire, then assaulted and captured, breaking the Russian formation and ensuring that more Germans are able to make it out of the Falaise pocket in time.

We agreed in post-battle discussion that Mark had some abysmal dice luck in the early game that really set him back, and that his tactic of roling the guns forward as fast as he could didn't really work for him. He probably would have been better off staying back and concentrating on laying repeat bombardments on my right-flank infantry and mortars. Even with those drawbacks, he almost had the game twice, only to have victory snatched away by my repeatedly making my 4+ unpinning rolls, of which I believe that I made more than my fair share. Also, his formation was a little weak, having only the two Churchill squadrons and the CO as core units, meaning that if my infantry just hung on long enough for my nearly invulnerable Tigers to take out all the Churchills, I could break the formation. Mark gambled on his Churchills being tough enough to withstand my infantry and push them off the objectives, and didn't quite make it.