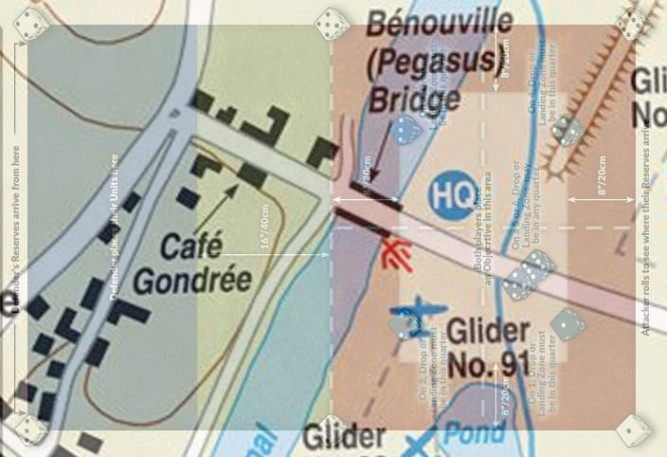 In this match up we decided that we wanted to try and recreate as best we could the landing at Pegasus Bridge. With that in mind we imposed some restrictions on ourselves, changed some things in the mission, and also added British Airlanding units. I concocted the list myself, but based it as best I could from the previous Overlord book.

One of the things we thought important was the opening phase of the assault, the 3 Horsa gliders landing on the field between the 2 bridges, and ousting the German defenders of the 716th. With that, one platoon of German grenadiers would start holding the bridge.

I decided that my reserves would increase in weight as the day went on (sort of, we'll get to that later). So the troop of Shermans I had in my list, would arrive last. Also, we decided that for reserve rolls, the tanks would not arrive from zone 1, 2 or 6, as we wanted them to come from the beaches.

The mission would have us deploy the attacking forces first, but in our game, the germans holding the bridge were placed first in the trenches and the pillbox.

Then I tried landing my guys. (As an aside, I really like the rules for paras and gliders, really fun!)

It didn't go too badly, one of the gliders crashed, lets call them B platoon, which had a rifle/MG team killed and the PIAT team. I placed my HQ team to land at the objective, and run out along the river, they nearly ran off the table, but just stopped short. A platoon landed at the table edge and ran 12" to stop just short of the German positions, perfect landing really. And C platoon due to land in the same sector as B platoon, I had them skid up to just behind the treeline, another lucky landing.

Alek then started placing his Germans, poised to attack across the bridge as quickly as possible. This being a dawn mission however would make things difficult, as he wouldn't be able to dash until daybreak. 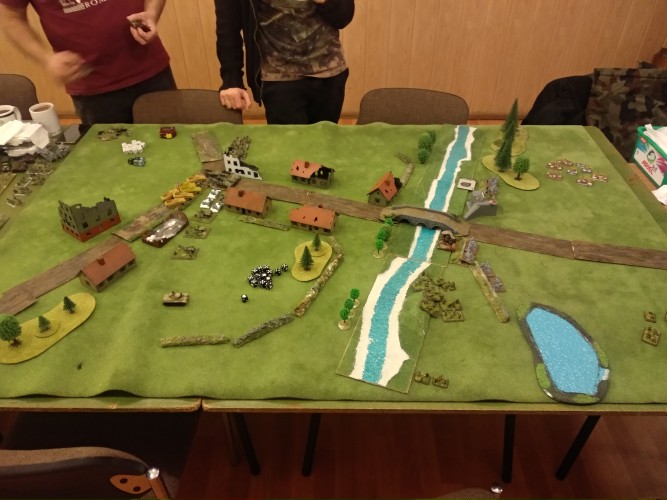 With my fairly lucky landings, more luck in that all of my platoons unpin, and immediately move to assault the pinned German positions. I make a bit of a mistake though, in that I assault with B platoon first, only getting 2 teams into contact, forcing the Germans out of the trench on the southern side of the road. The assault from C platoon is more successful, ousting the Germans out onto the bridge.

The Germans manage to get a platoon of panzer IVs from reserve, and rather annoyingly, also unpin/remount all except the nebelwerfers and a single sdkfz 251(75mm). 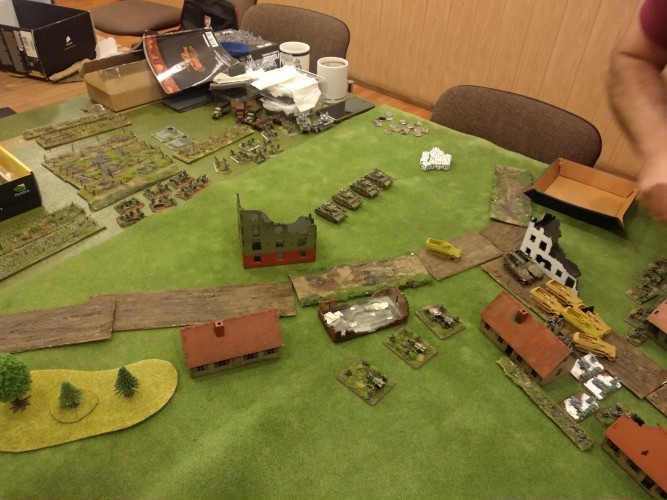 Having fired on B platoon unsuccessfully in the previous turn, the Germans on the bridge light themselves up, and are cut down by my own forces consolodating on their previous positions.

The germans respond by unpinning the nebelwerfers, and hit most of A, B and the HQ platoon, but amazingly only one team from the HQ is killed, and one rifle/MG team is killed from B platoon. The convoy loomimg ever closer...

Not wanting to be hit by artillery again, I reposition B platoon north of the road, heading up to the treeline. I do a line of sight distance test to try and see the germans approaching through the field to the north west, and fail. With no other targets in range or visible, I hunker down in the trenches with the command team and A platoon.

The germans now at the bridge, are too close to attempt a repeat bombardment and must rerange in, they do so on B platoon, but to the platoon's luck, they fail to range in.
The Germans close in, 2 half tracks in range for a mounted assault. Combined MG fire from the halftracks, HMG platoon, and sdkfz 251 platoon, pin my airlanding A platoon. The assault goes in, but the PIAT, pinned, still manages to land a hit. Bailing out the half track, the other half track, kills the remaining command team, I succesfully swap my commander. Then counter attack, destroying the other half track, forcing the the teams inside to break off, but only one team can get far enough away and the rest are captured. 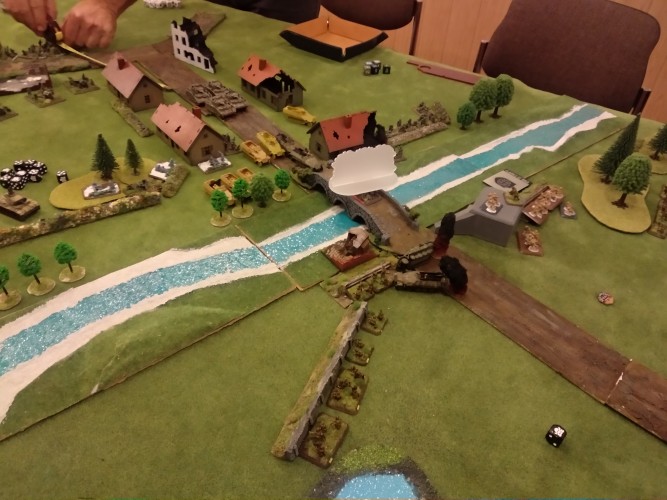 Daybreak, damn! I wanted to stay hidden as long as possible. Failing again to get any reserves I opt to dig in where possible, but move my PIAT into the pillbox at the bridge. I take a potshot at one of the half tracks but miss. A bit more luck sees the mortar from A platoon hit the the panzer grenadiers on the bridge (that previously survived the assault) with smoke. My belief being that this will go someways to reduce the effectiveness of incoming fire.

Nebelwerfers, ranging in again on B platoon, kill 2 rifle/MG teams :/

Turn 5 - Into the Frying Pan

An unsuccessful reserve roll again for me, thankfully I get one for free. So at this point I back track on my original idea of "reenforcements ariive in order of weight", by all means it should have been Airlanding engineers, Airlanding HMG, Airlanding AT, Universal Carriers, Shermans. But, I really needed these 6pdrs.
So I land them, again in a perfect location, directly south of the bridge. I can get flank shots on the half tracks on the bridge waiting to assault. But, they all miss :)

The Germans keep up the fire, but this time turn most of their attention to the 6pdrs, they are in a critical position, and need to be dealt with. So all machine guns that can, fire at them. And reduce them to just 1 team.
The 2nd mounted assault goes in, and is again repelled by the guys in the trench.

Again, failing with the reserve rolls, I land my engineers, safely but nowhere near either objective. My 6pdr doesn't run away, great! But it fails to connect on the side armour of the PzrIVs crossing the bridge. All of my fire is ineffective as I await the incoming tank assault.

Aleks Germans fail to kill the remaining 6pdr with more MG fire, but still try to force the Brits out of their newly acquired trenches. Another assault goes in with a pair of PzrIVs, one is destroyed by the 6pdr, the other is forced to break off.

And it is at this point that we run out of time.

Fantastic game, thanks Alek. I'd have loved to continue and see if my guys could hold out for the reenforcements.

Draw: due to time out