Greetings, from a slightly elevated position in Normandy(sort of).
In this battle Alek and I play another campaign battle, hill 112. Keeping with our current trend of trying to keep things as close to history as will allow, I brought a British rifle company supported by some Churchills, Shermans and some Typhoons (Kittyhawks). Alek brought a panzer grenadier company with support from some Panthers.
An attempt was made to get the tabletop at least somewhat resembling the area, we made a hill by propping up a cloth gaming mat with some folded mats and shallow boxes. Some roads, trees and some farms and we had a decent table to fight over. 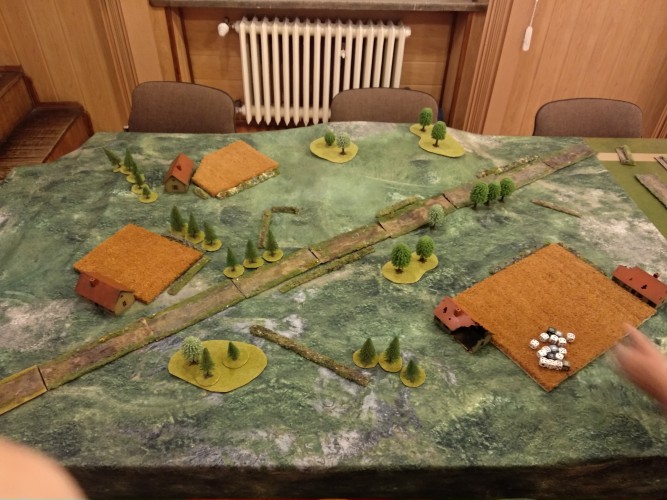 Me being the defender I choose to defend the hill naturally. I placed a platoon of 4 25pdrs at the top, my 1st infantry platoon guarding my left objective, and the 2nd my right objective. I placed my mortars in the cornfield to my right flank, my commander in the woods on top of the hill, my fighter bombers would be starting off table, and my 6pdrs would be in ambush. I placed my minefields on my left flank. My tanks and a rifle platoon would be my reserves.
Alek placed then proceeded to place his entire force (bar the HMG platoon becasue he forgot they existed for a moment) on my right flank. 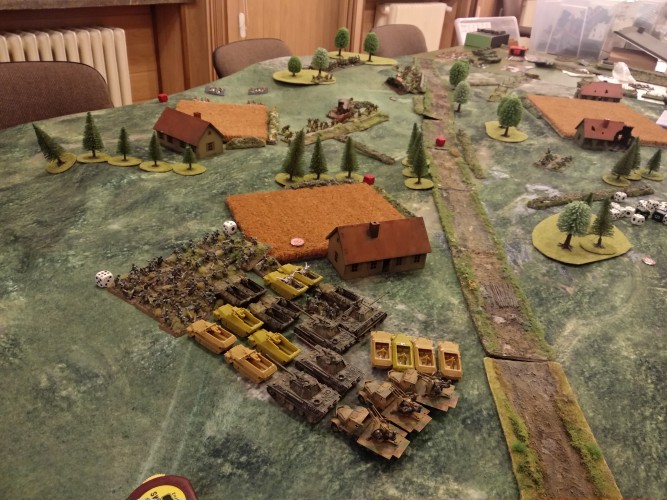 I should probably expect an attack from my right side. 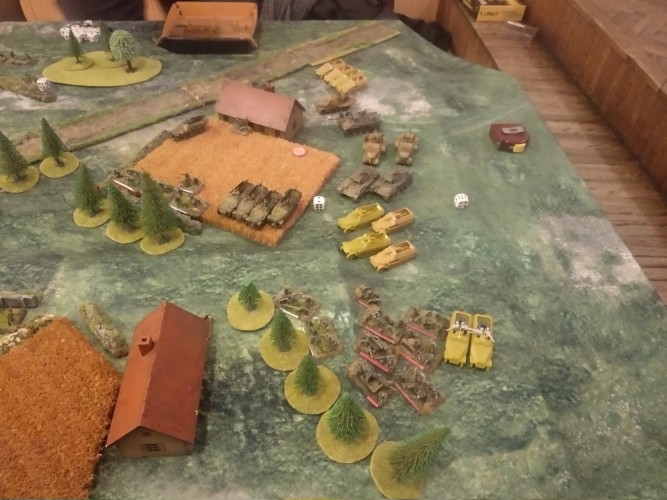 Alek manouvered his force to envelope my right flank, but kept his HMG in the centre to restrict my movement in trying to counter. His intial firing did little, hitting my troops on 6's at best, but on 7's and even 8's due to some failed blitz moves. He failed to range in on my mortar team. But he did manage to kill my PIAT team on the right flank. Sigh...
I unpin my 2nd infantry platoon on the right, and manage to get a reserve, so I choose my 3rd infantry platoon. Unfortunatly my scattered roll places them in my left corner, so they need to hike it to be of any use, I manage to get them behind my 25pdrs. My aircraft arrive this turn, so I place them right in the middle of his now spread out force, I find a potential spot to hit 2 of his Panthers and 2 of his AA trucks. I also made an error here, I should have placed my ambush now to help against an inevitable assault from tanks and half tracks, but opportunity missed. Having weathered the defensive fire from the AA trucks and several of the half tracks, the fighter bombers range in, if my memory serves me right not on the first attempt because I only manage to hit some collateral fire support half tracks but they pass their armour saves. I do manage to pin the pz grenadiers advancing on my extreme right flank my targeting the house.

Alek, having unpinned all infantry teams successfully, presses his attack by moving one platoon of pz grenadiers into assault range of my infantry platoon on the right objective. And avoids a repeated bombardment by moving his other platoon closer to my table edge. My infantry platoon are pinned by combined MG fire and the assault goes in. 3 of my teams are killed, and then I fail to counter attack. I'm forced back, but not off the objective.
I unpin all my guys but fail to get any reserves. My aircraft arrive again, and I place my ambush in the treeline over looking the objective and close enough to cover an assault directed at the infantry on the objective. My 1st infantry platoon on the left objective moves out of cover to try and pressure the HMG platoon. The 2nd infantry platoon digs in on the objective while the 3rd advances down toward the mortar team. My aircraft manage to find a spot out of range of AA fire, and attempt to bomb the pz grenadiers in the open at my table edge, and kill one team. The 6prs now revealed, fire on the 7.5cm half tracks destroying all of them. 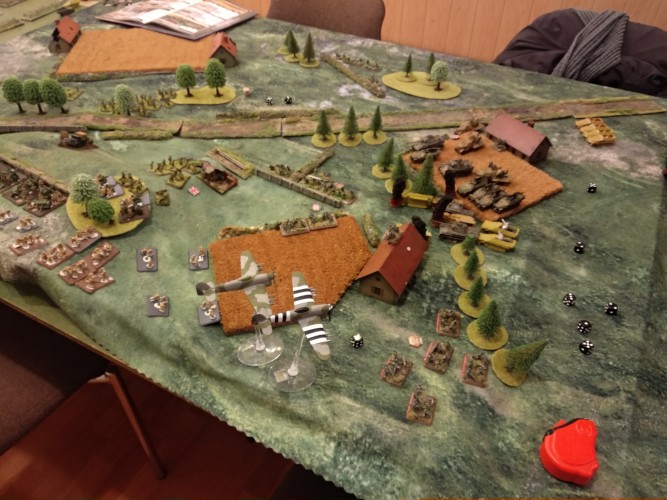 At this point Alek was regretting plcing all his troops in such a small area as now they are getting in each others way. He moves his pz grenadiers in for a second assault, and again provides supporting fire for the charge. Meanwhile, his HMG teams moved into a position to shoot at the other infantry platoon, and the mortars range in on them too, my guys sustain a few casualties, 3 rifle teams. When the assault goes in, it is repelled by fire from the assaulted rifle team, the 6pdrs and the command team (SMGs).
I fail to unpin my infantry platoon on the left flank, and foolishly attempt to dig in, which they fail of course. I get some reserves, Shermans, but again they appear on my left flank. I continue to advance the 3rd infantry platoon to the right flank, and now they are embedded in the mortar teams positions. My shooting is not amazing this turn, my infantry on the right flank kill an infantry team from the now very depleted pz grenadiers, and that's pretty much it.

Alek attempts to preserve his infantry here, and gets them into cover. His focus changes to getting his armoured units into the fight, so he now focusses on killing the 6pdrs, and removes one gun team. But no assaults this turn.
And, again unfortunately we run out of time. I think about maybe playing one more turn, but considering that I need to hold out for at least 2 more turns, we decide to just call it quits, ready to fight another day.

A really enjoyable game, thanks Alek. These historic battles are great, we are trying to play them with appropriate forces that would have fought on the day in reality, and researching orders of battle, annecdotal accounts and maps, photographs etc. really brings them to life. I play with a lot of proxies (and unpainted minis, sorry :p) but I still think that we capture the flavour, despite rarely managing to finish a game :p

1 Person Has Recommended Hulky For a Commendation