Howdy folks.
In this battle, I found a willing opponent to reenact the famous battle at Villers Bocage. Hubert, would be playing as the Axis forces, and I the British.
We had agreed to play a couple of weeks prior to, but not this battle specifically. Hubert was weary of using Tigers in the face of so many 17pdrs, but he agreed to bring some in his force anyway (and a Ferdinand, to my horror). His force consisted of a PzrIV company (8 tanks) and support from a grenadier platoon, a Ferdinand, 2 Tigers (Aces I think) and a Ju87 tankhunter.
I would be bringing a Sherman company as 4 troops of Sherman platoons (2x75mm + 1 Firefly) and a 2 strong Sherman HQ troop. And a rifle company, with 2 platoons of infantry, 4 6pdrs and 4 mortars. I don't have enough Sherman tanks, so I borrowed some Cromwell tanks from my friend Alek (very flavourful) and set off down the road toward Villers Bocage to drink some tea. Tally ho! 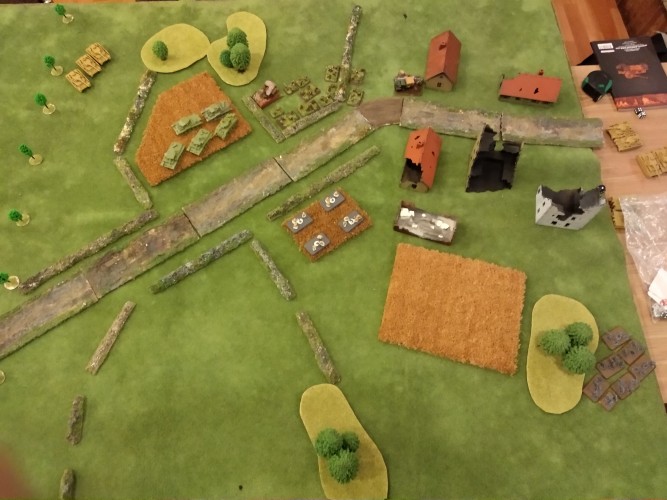 I had to deploy first, I could have put down all my infantry, but opted to go with a riskier, more 'flavourful' deployment, but also, since my force was 2 formations, having both commanders deployed would help with any units that were failing to remount/unpin. So I placed a Sherman(Cromwell) troop in the crop field in the middle, with the commander, and covering both objectives, I placed and infantry platoon with the relevant commander. My mortars were placed centrally so I could have them run away if need be.
Hubert deployed some PzrIVs in a threatening location next to my tanks and his own infantry out of immediate danger. 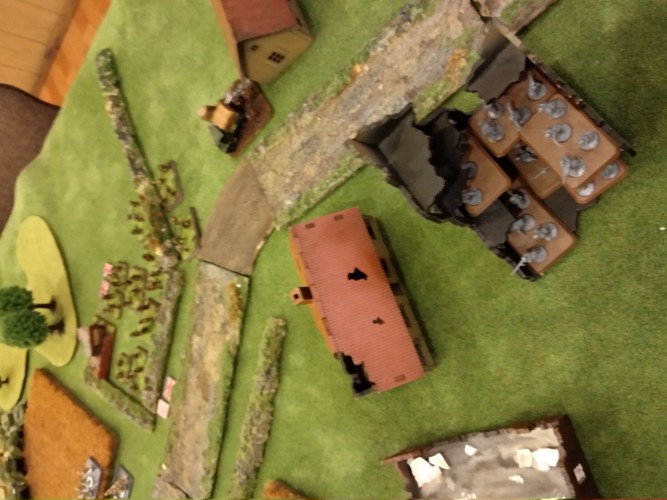 Axis are the attackers thus go first, and immediately move the PzrIVs up to the Bocage to shoot over it into the flank of my tanks. Thankfully he misses. He moved his Grenadiers up to the town, into a building for cover.
I successfuly remount all but one tank, and unpin my remaining infantry. I retreat my mortars to the southern field, move in with the tanks and dig in the remaining infantry teams. Fire from my tanks kill 2 PzrIVs and bail another. A good start! 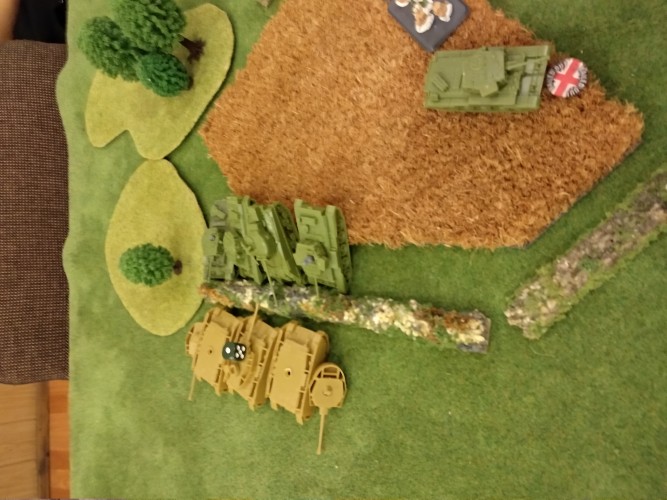 As the PzrIV fails to remount, the infantry remain still. But, the Stukas make their first appearance, and target my Shermans poised to end the war early for the PzrIV platoon. And, they miss.
Of my own tanks, I fail the remount of the remaining Sherman. But move the command tank off to attempt to support the infantry against the grenadiers. My Shermans, fire on the remaining PzrIV, destroying it outright.

Turn 3 sees the arrival of Hubert's Tiger tanks. They come on on the south west corner and move up to the bocage to take some shots at my command tanks. His infantry, now with more confidence seeing the Tiger's approach, move closer to the centre, occupying a different building. His tanks fire on mine, but score no hits.
I also get some reinforcements, unfortunately, they appear in the north east corner, they'll need to do some driving. My bailed Sherman remounts and with the other 2, move into the forest south of the wheat field. The firely among them takes a punt at the Tigers, but to no avail, my command Shermans direct fire smoke in their faces, while my mortars range in on and kill some grenadiers. 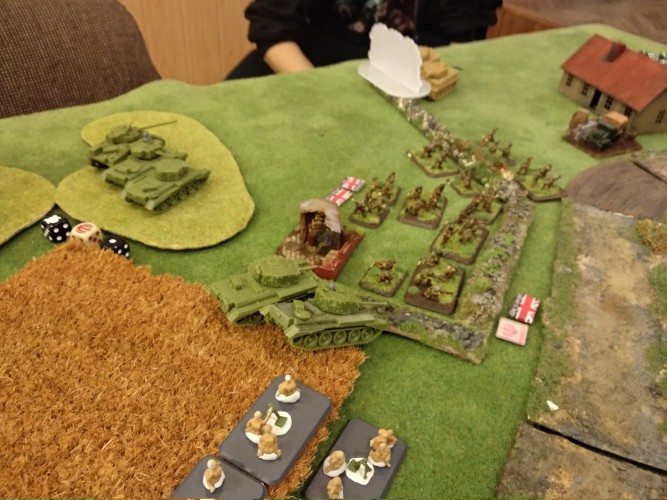 Forced to move away from the smoke, Hubert moves his Tigers onto the objective, where they now have a clear line of sight down the road to my newly arrived Shermans. They fire, and miss again! Also no air support this round for the Germans. The Grenadiers occupy a new building across the road from my infantry platoon.
I get more reserves this turn, the deploy in the south east corner and dash along the edge behind under cover of the bocage, hoping to put fire into the Tigers next turn. My Firefly from the first troop bogs down in the forest, his troop mates move up to the bocage to attempt to blind the Tigers again. The 2nd troop of Shermans divide their force ( huge mistake on my part ) to provide fire support on the newly occupied building by the grenadiers, and to let the Firefly take on the Tigers. This is a terrible round of shooting from me, the Firefly misses, the Shermans miss with their smoke, no teams are killed fromt he grenadiers, though they are pinned, and now ranged in on by the mortars.

Hubert's German force receives some very welcome support in the form of a Ferdinand, and his Ju88 also arrives. He moves his Ferdinand up beside his Tigers on the objective and wreaks a devastating toll on my Sherman company. His Ju88 bails out my Firefly from the 3rd troop. The Tigers fire on the Shermans behind the bocage, killing both of them. The ferdinand kills my 2nd troop Firelfly sitting in the road.
I respond swiftly and decisively by failing my morale check for the 1st Sherman troop. I get some reserves, 6pdrs, but I roll poorly for their placement, south east corner, they have some walking to do! (Ideally, they would have arrived south west, potentially getting some shots on the Ferdinand's rear armour). I then move my 2nd Sherman troop across the northern field in an attempt to ge the side of the Tigers. My command tanks move across the road to provide smoke/HE support. My 3rd troop also moves to fire on the Tigers with smoke. Essentially, none of this works out, and the mortar barrage fails to do any decisive damage. Oh dear. 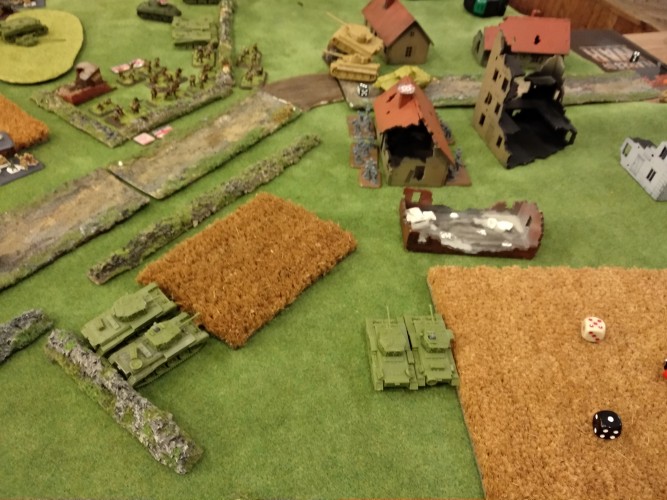 The big cats are wreaking havoc

Hubert receives his final 2 platoons of PzrIVs arriving from the north east and west corners. He blitzes his Ferdinand closer to my command tanks, and they all open fire. The Tigers destroy the a Sherman from the 3rd troop, the Ferdinand and the PzrIVs destroy the command tanks and the remnants of 2nd troop. Devastating firepower!
I ateempt to remount my Firefly of 3rd troop, and fail. This is exasperated by the fact that 3rd troop is now required to do a morale check, which they fail. Which is now even worse because since I only have one unit in good spirits (off table) with no commander to roll to test, the formation evaporates. :/ I get some reenforcements, and manage to place them exactly where I need them, south west, behind the objective. I advance my 6pdrs, but they are really slow. Fire from my PIAT teams produce no results.... 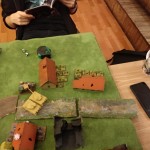 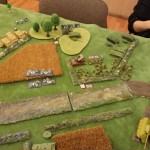 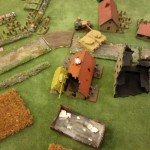 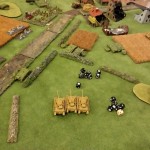 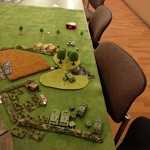 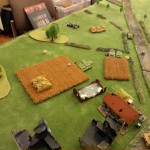 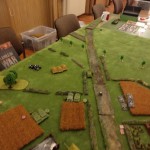 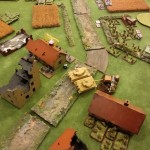 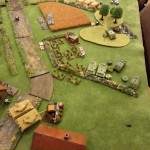 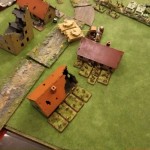 The Tigers move to the bocage in the south in an attempt to machine gun the 6pdrs in the flank. The PzrIV platoon moves up to the bocage facing the mortars, also with the intent of using lethal machine gun fire.The PzrIV command tanks move up to secure the objective while the Tigers have moved off. The shooting against my infantry is ineffective this turn.
Things getting a little desperate at this point, I try something a little crazy. I move half of the 2nd infatry platoon from their building across the road to assault the Ferdinand. I move the 1st infantry platoon across to the south somewhat surrounding the Tiger tanks. I then move my 6pdrs into the forrest so that I might get some fire into the PzrIVs across the field, right behind the bocage. I lay smoke along the bocage, covering my infantry from the Tigers. Firing from the 6pdrs, predictably does nothing, but I do manage to take out one of the command PzrIVs with a PIAT team. Then the assaults, I know I cannot harm the either the Tigers of the Ferdinand, but, they are sloooowwww. I assault the Tigers, survive the defensive fire thanks to the smoke, the PIAT fails to kill a Tiger despite hitting it, the Tigers counter, kill the PIAT team, my guys counter, they throw rocks at the tanks I guess, but, superior rock throwing shows Jerry what's what and they fail to counter attack! one Tiger manages to escape, but the other is captured, nice! I attempt a similar feat on the other side, but it doesn't work out, the assault fails, my guys are pinned. Captured a Tiger though!

Hubert's Tiger flanks around the back of the AT guns, his PzrIVs attempt to cross the bocage, only one bogs down. He moves his command tank out of range, but leaves the Ferdinand, somewhat exposed, but his command tank and remaining grenadiers are covering it in case of assault. Ju88s dive on the exposed infantry and kill a team. The Ferdinand fires on the PIAT of the 2nd infantry squad killing it. Machine guns of the PzrIVs kill a mortar team, The Tiger guns dow 2 6pdrs, and pins them. The Tiger assaults the 6pdrs, rolling right over them since they are forward firing. The PzrIVs assault the mortars, they are also running over them, they dont get a chance to counter or at least break off.
Not much I can do at this point, I have no AT weapons. I dig in with the 1st infantry platoon. I unpin the 2nd platoon and make a mistake here. I fire at the infantry in a desperate attempt to pin them, but in doing so, cancel my ability to sneak up on the enemy tanks. So I decide to wait til next turn. Not much point though.

Hubert's Tiger fails its last stand check, yay! He closes in with the rest of his PzrIVs, pin my 1st platoon, kill a team form the 2nd. And at this point I concede defeat 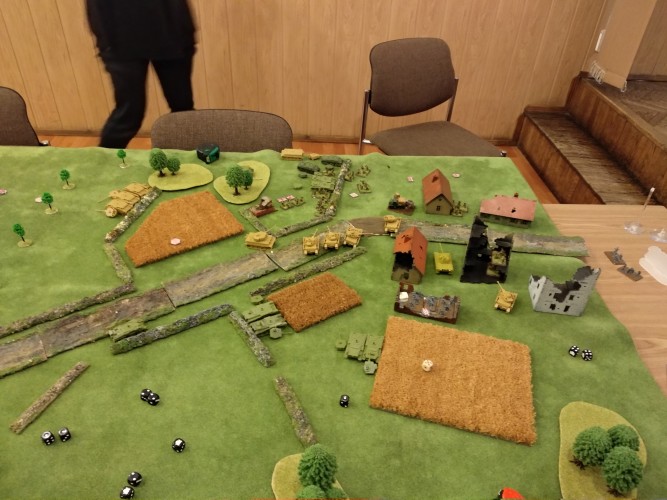 I had a blast! I believe Hubert did too. I wouldn't say it was close, but there were certainly moments where if had just a bit more luck I might have pulled it back, but to be fair I did have quite a bit in the first place. Losing the Sherman formation before it was fully on the table hurt, but it goes that way sometimes. Still, I captured a Tiger! Thanks for the game Hubert!