A game from our gaming club
100pts Outflanked with US Defending

I have deployed my infantry centrally arround objectives, holding both AT platoons a bit back as the best position for them was ranged by German artillery. M10s were in ambush while both Sherman platoons in reserve. Germans deployed towards the centre of the short edge.

First 3 turns were pretty uneventful, as the Germans were maneuvering into position on their left flank, where they were able to use a hill for hull down position. I was trying to also get my infantry into better position, which was complicated by German artillery, that wasn’t doing much casualties, but was pinning me down constantly.
Both of my reserves came early. I have sent the 75mm Shermans into wide flanking maneuver, trying to get to German artillery without exposing myself to enemy tanks. 76s mm Shermans were waiting behind a forrest, waiting for the Germans to come closer.
Only casualties on both sides were due to air support. The Henschels were able to wipe one unit of the 57mm AT guns first turn while my P-47s destroyed a platoon of Pz IVs on turn 3 (all the tanks were bunched under the template).

Turn 4 was crucial. German Panthers moved to intercept my infantry, that was trying to get to their flank through a forrest. The infantry was reduced to just 3 stands, but the maneuver allowed me to ambush and blitz my M10, so that they were able to get side shots on Panthers with predictable result. Also my Shermans finished their flanking maneuver and wiped the Wespes.

It was getting grim for the Germans. They were left with only HQ Panther and 2 Tigers. The game continued for another 2 turns with a duel between M10s, 76mm Shermans and the last 3 German tanks. In the end the Germans had to assault to get closer to the objective and they were pushed back by determined US Infantry loosing on scenario right before the Shermans were able to finish the HQ Panther with some rear shots. 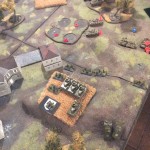 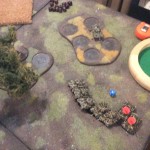 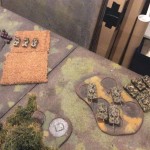