Hitting Jerry Where it Hurts: The Fuel Depot

Below are two overview images of the battle field, and an American intel map of the area near Saint-Lô. Following that, you’ll find the battle report as told from alternating perspectives. 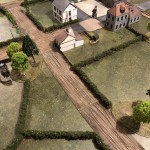 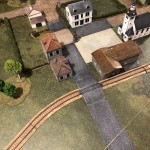 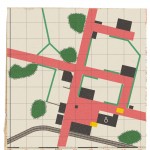 On the morning of July 14th, as battle for Saint-Lô unfolded down the road, we were tasked with capturing a German fuel depot in a clump of houses just outside of town. The Nazis were short on fuel and capturing the fuel would be hitting them where it hurt.

The countryside was criss-crossed with bocage, making it nearly impossible to get a clear view of what lay ahead. Reports indicated the fuel depot was near the church, but it wasn’t clear on what side. An officer car was also spotted indicating some sort of HQ might also be present. StuGs had been spotted too.

At 11:00 hours we began moving across a field lined with hedges. A few hundred meters behind our right flank our mortar platoon would be keeping Jerry down while we crept up on him. We also had three Stuarts with us as a detachment from 3rd Armored. Spread out in the area were another company of veteran Shermans from 3rd Armored as well. They were, in theory, part of the larger XIX Corps’ push to capture Saint-Lô, so it was a bit of a rag-tag group. To cap it off, in the distant rear were a pair of 3” AT guns in case things really went south.

We kept our heads down for that first thirty minutes moving across the field, but we could hear the 76mm Shermans opening fire on something, presumably the StuGs. The 75mm Shermans that rolled into the village to our right opened up their MGs, too. But the echo of gunfire died away into the rainy morning air.

The Americans were pushing southward to Saint-Lô. They were bold, and unmatched in numbers, but frankly, inferior fighting men. Their progress so far had been paved with defeatist replacements and worthless Osttruppen. We were the hardened core that remained and would break their advance to Saint-Lô. The hard work of defending the fatherland ultimately came down to the strength of our wills.

The 352nd Infantry Division had left a fuel dump here, intended to refuel reinforcements prior to engaging the Allies head on in the city. Virtually everything _in_ the city had been destroyed a week earlier from Allied bombing, adding importance depots which were outside the city. And they call themselves liberators…

We occupied the train station and church, keeping an eye on the fuel depot. Our officers had a makeshift command post nestled between the two buildings. II Fallschrimkorps stood beside us, deploying two StuGs in the forest behind the church, with a clear view up road into the bocage, waiting for the Americans to stumble through.

We waited in the rain, when suddenly six tank shots rang out across the town. The trees around the StuGs exploded into splinters and rained dirt around them, but they survived unscathed. The Americans had foolishly already given away their position. The StuGs returned fire, joined by two of our 75mm Pak 40 AT guns hidden in the long grass. With a sharp bang, two the Shermans ground to a halt and billowed smoke.

Machine gun fire also rattled across the village square, shattering the train station windows. But no one was hit and our Stummels roared into action and knocked out a Sherman.

We also had a platoon mounted in three half-tracks who speed across the fields outside the hamlet. With any luck they would flank the Americans within the hour! 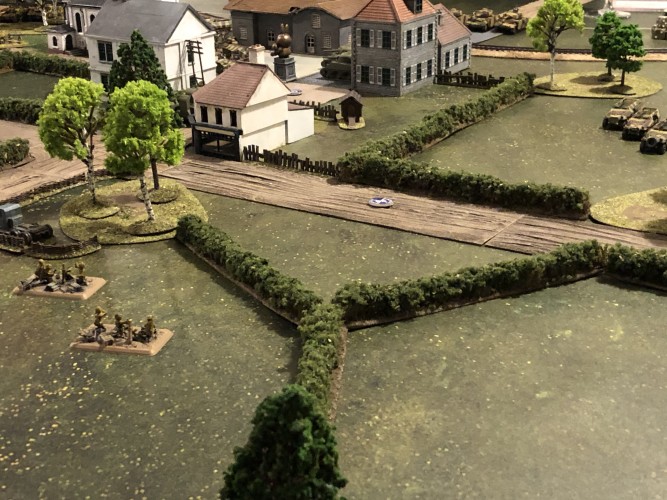 Panzer grenadiers racing cross-country, attempting to hit the Americans from behind.

By 11:30 we were hunkered down on the far side of the field. The road on the other side of the bocage had been mined though, so it was slow goin’. 2nd Platoon cleared one of the mine fields but the Stuarts insisted on plowing through the bocage directly. Two made it, one didn’t, which frankly ain’t that bad. But it doesn’t change the fact that tankers need air holes in those helmets of theirs.

To our left, the two Shermans which got lucky maneuvered around the burning wreckage of the other two which Jerry hit. They opened fire again, and those trees didn’t know what got ‘em! The StuGs, on the other hand, were still sitting pretty. At least our Shermans were keeping the anti-tank guns busy. Better you than us, boys!

To our right the two Sherman platoons joined up and opened fire on the half-tracks in the town center. In an instant, two loud bangs shattered the glass in the windows of the house near us. They had got the half-tracks! About damn time! 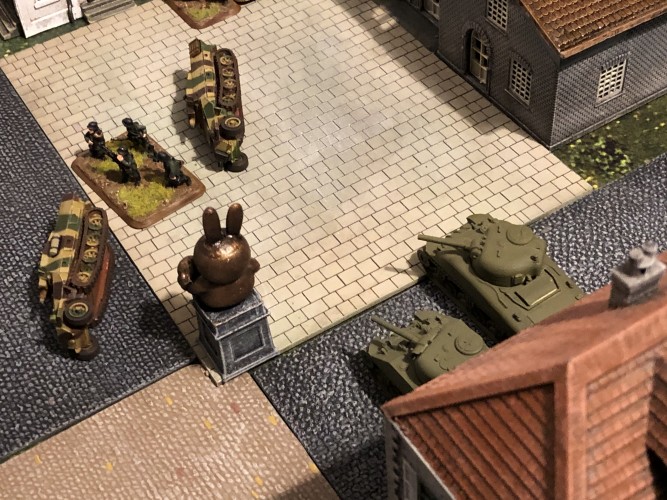 Shermans taking out Stummels in the town center.

The Americans were wreaking havoc in the village center, but they wouldn’t for long; our reinforcements had arrived! Three Panzer IVs detached from the II Panzerdvision rumbled up the road and opened fire across the railroad crossing into the Shermans. Sadly, no luck, the Shermans emerged unscathed. But they were old ones, the 75mm’s, no match for our panzers; if they knew what was good for them they’d be in hard reverse any minute now!

We knew they wouldn’t hang around, so, embolden by the Panzer IV’s behind them, one team from our platoon burst out the doors of the train station and assaulted the Shermans with their panzerfaust. They were too low though and the round bounced off the curved edge of the hull, failing to knock it out.

Our StuGs and Pak 40s continued to fire away at the Shermans on the other flank, but to no avail. As our half-tracks raced around the Americans’ flank, we opened up on the advancing infantry with MGs from the church windows. They dove behind the stony base of the bocage as twigs and leaves flew around them but we heard the shouts of several who went down. They were pinned! 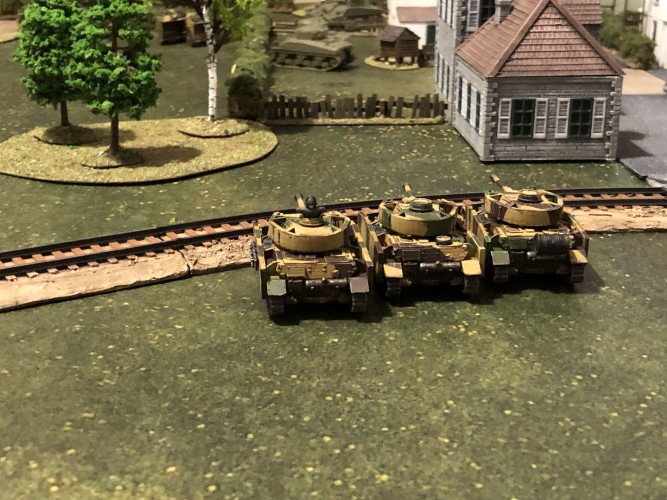 Panzer IVs, threatening Shermans from across the tracks.

We had made contact with the enemy! Those German MGs were nasty, but you don’t become a Ranger for nothing. We rallied and got back up on the move. Four or five teams actually climbed up onto the fuel depot and the rest took up positions in the last row of bocage in front of the church.

The 76mm Shermans kept firing away at the StuGs and Pak 40s, but simply couldn’t knock them out. On the opposite side, the 75mm Shermans rolled through back gardens and cabbage patches catching the panzer grenadiers in an ambush and knocked out two of the half-tracks. The teams inside tried to get out, and did... covered in flames.

We were all over the fuel depot but until we took out the AT gun next to it, we couldn’t properly hold it. Four teams charged it but the surrounding paratroops and StuGs rained MG fire down upon us. Granted, a bunch of fuel drums didn’t exactly make for great cover, but we had taken too many hits in the full frontal assault and ducked back behind the objective. 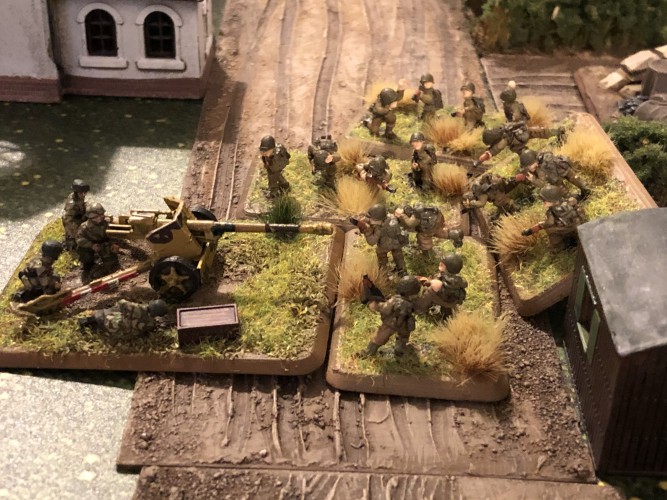 The Rangers make their first assault on the gun.

Every thirty minutes more reinforcements rolled in. Another pair of StuGs came from the fields behind the church and the original two by the fuel depot rolled up alongside our Pak 40 to help keep the American vermin from crawling all over it. The mortar Hanomags parked behind the church swung around as well as it was becoming clear this was where the Americans were making their main push.

The MGs in the church rained fired down upon them as did the mortars. Many of the Americans fell but even more of their comrades keep fighting. These were no ordinary infantry but worthy fighting men. It seemed as though no matter how many times we pinned them down, they’d get back up again.

We held on, but it was becoming more difficult to see how we could turn the tide of this battle... 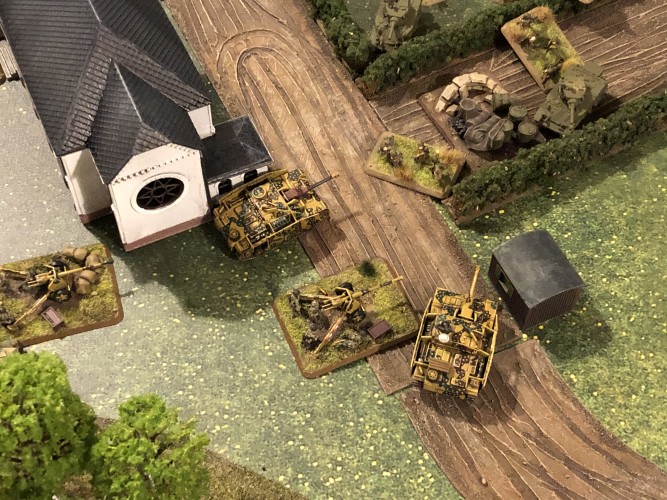 Rangers falling back after their initial, failed assault. 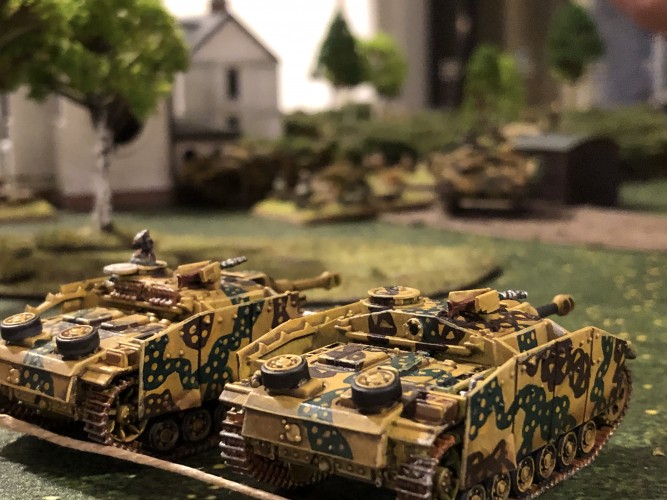 The second pair of StuGs arriving at the battle. The first pair can be seen on either side of the Pak 40.

Our men were damn close to securing this objective! Our last assault had been pushed back, and after taking all the mortars and MGs Jerry had up his sleeve we were pinned down again. But Rangers lead the way! We got up, and moved into position to assault again.

The Shermans which had been guarding our right flank began dashing down the road we had cleared of mines earlier. If things went south, they would be our back-up.

The two 76mm Shermans continued to fire away at the StuGs to no avail. Unbelievable, but after losing half of their platoon they were probably keeping their distance. Some of our men had jitters; this hadn’t gone well earlier and there were now two more tanks than before. So much for thinning them out with the up-gunned Shermans!

But then we got lucky! Both our platoon’s bazooka teams scored direct hits on the underbellies of the StuGs! Their crews bailed out and dove for cover behind the Pak 40 gun still pointed at us.

With the StuGs out of action, we could focus on the AT gun. We assaulted in two waves. The first, again was pushed back, but the 2nd, wasn’t! They charged the gun, climbing over the wheels and gun shield and made “Good Germans” out of its crew.

With the tank crews retreating into the woods, the fuel depot was now securely under our control; we had won the battle! 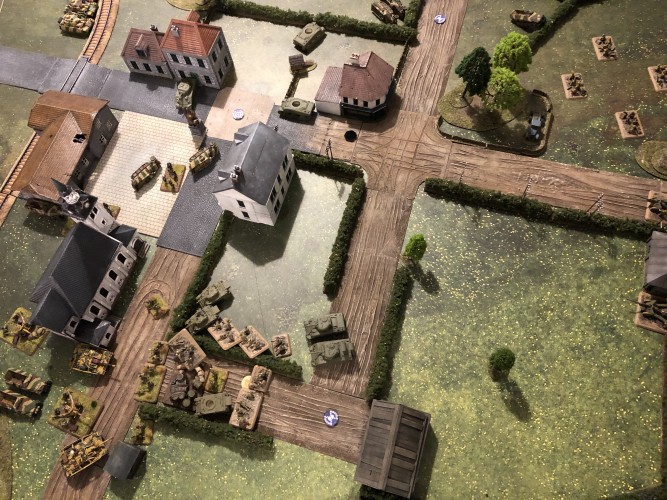 The final moments of the battle.