Battle at the Foot of Hill 314

As was the case with all my reports, the battle’s story is told from both sides, turn by turn. The narrators are veteran beach assault forces and Fallschirmjägers for the Allies and Axis respectively. Below you can find an overview of the table, and intelligence maps used by Allies. 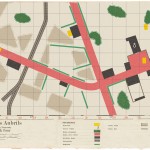 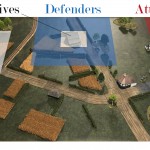 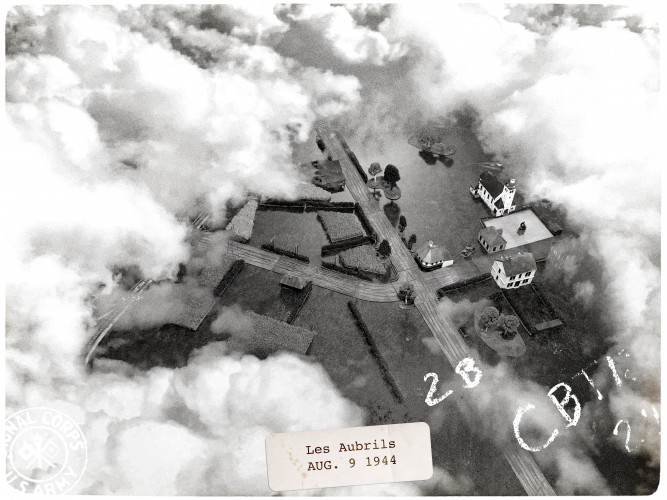 On the morning of August 12, as part of Operation Lüttich, we advanced into the hamlet of Les Aubrils. After counter-attacking on the 7th, we held Mortain, but nearby, on a small hill with a chapel, the Ami’s were holding out. A smaller pocket lay just to the east of the hill, and wiping them out, or dashing past them, up the hill, would be a much-needed victory for the offensive.

As dawn broke we moved forward, taking up positions around the small stands of trees that dotted the area. From our rear, our mortars began targeting the Ami heavy weapons (mortars and HMGs), from behind our command post. It was difficult to tell what was hit, but it seems we destroyed one of the mortar teams and pinned the rest of them, as well as the HMGs.

In the front, our StuGs came out in force; firing on the Americans already advancing towards us. Inevitably it turned close-quarters in a heartbeat and one of our StuGs assaulted their infantry, killing one team and forcing them to fall back. Their push seemed to be easily quenched! Their AT guns would still be dangerous though, so the StuGs also tried to move into the forest for cover. Only one managed though, the other got a gottverdammt log stuck in its tracks which slid down the hillside. Now it was stuck with its rear to the enemy! Scheisse! 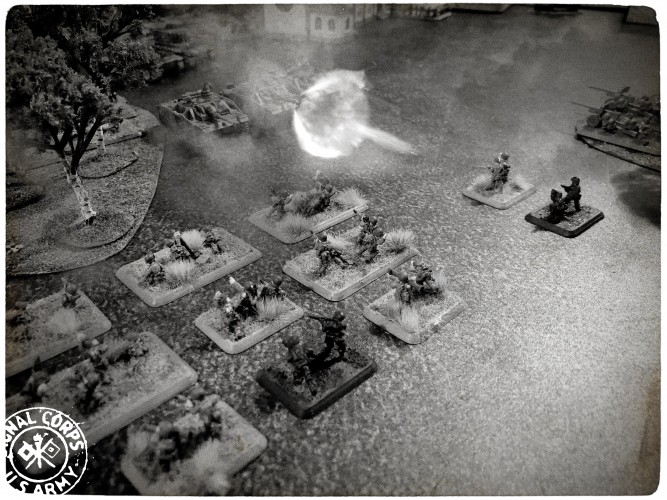 The initial assault from the American perspective.

Our best hope to break out of the Nazi’s pincers and link up with the rest of our corps would be making a push east-ward, back towards Vire. Doing so would require us to swing around the northern end of the hamlet and capture the Nazi’s command post, or move directly into the hamlet. Securing it, and disabling their 75mm AT guns, would give 2nd Armored (also trapped, just west of us, on Hill 314) a good shot at linking back up with the rest of our corps.

Our beach assault company had been fighting together since D-Day, and we were going to give Jerry hell! We had air-dropped supplies from the Air Force which helped keep the morale up. It was just over a month ago that we had made it onto the beach, over the seawall, through the bunkers, and now we were at Mortain; we would break through again. 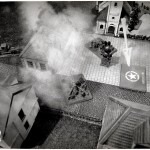 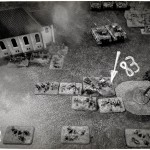 Jerry came out in force, with three of their squat assault tanks rumbling towards us. 1st Platoon had been inching forward, keeping an eye on them and was immediately caught in the fight. One team was wiped out as the Nazi tank steamrolled forward.

1st Platoon turned and ran back to the hedgerows as fast as they could as the tanks consolidated. “Here they come!” Rogers bellowed, as they ran. We sprung our ambush, throwing off the branches covering our four 3” anti-tank guns. All of our anti-tank guns opened fire, trying to pummel the assault tanks, and managed to put several rounds into their tanks. We destroyed their HQ team, and hit one in the ass which had gotten jammed up trying to get into the woods. For now, we’d held them off. 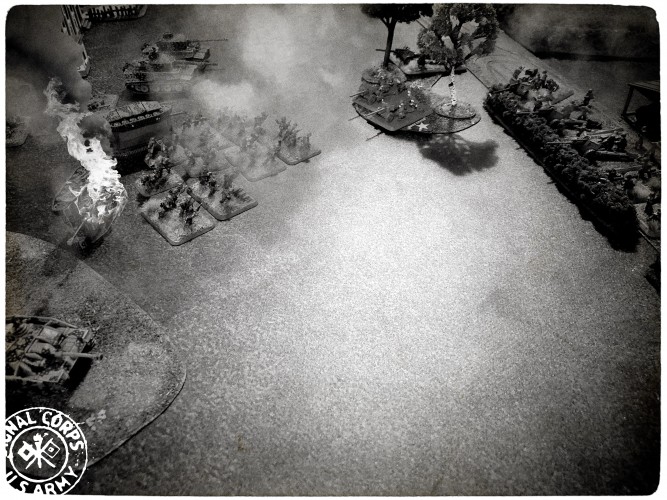 With our mortars and HMGs pinned down, 1st platoon moved into the barnyard to defend against the inevitable Nazi assault. 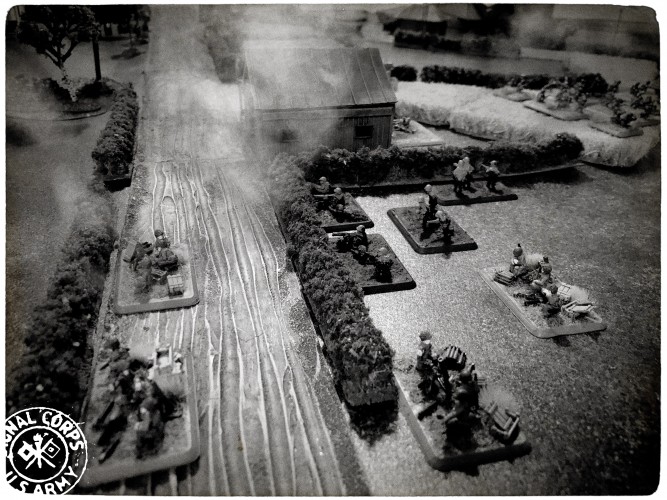 Heavy weapons stuck on the edge of the battle.

2nd Platoon though, seeing that we’d have to break out by heading directly through Les Aubrils, began moving south-east keeping in cover to make sure they’d make it to the town at full fighting strength to assault the guns there. 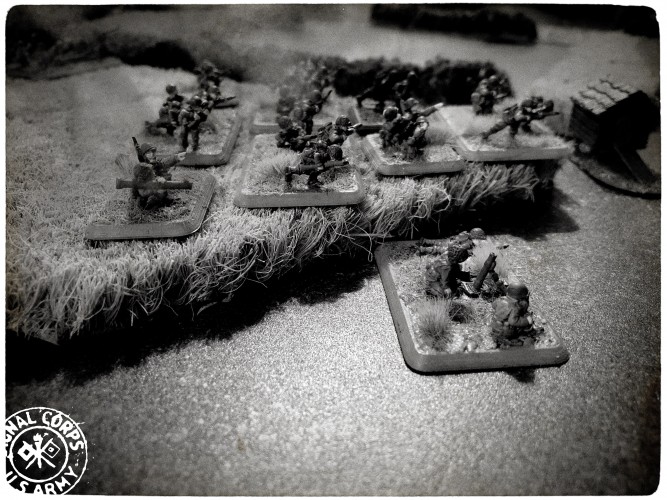 2nd Platoon on the move!

With two out of our three StuGs destroyed, a much needed set of reinforcements was called up from the rear. Three StuHs moved forward, and opened fire on the wall of anti-tank guns the Amis had deployed. The shots were on target but the Amis were tucked into their cover well and we didn’t manage to destroy any at range.

It would be up to our hardened Fallschirmjäger platoon to take out these guns! They charged forward, springing into the foxholes in the forest where the smaller anti-tank guns at the front were dug in. The Americans opened fire and two of our teams went down, but several made it through and killed one of the gun’s crew, destroying the gun with grenades, and finally dashed back to the rest of the platoon.

One of our 57mm AT gun teams had been jumped by Jerry, and the other one, thoroughly spooked by the wave of Nazi forces moving forward, turned tail and ran back in the direction of Hill 314. We were surrounded so I don’t know where he thought he was going... but I guess after a front-row experience with German paratroopers some of the boys just didn’t have what it took to keep fighting. 1st Platoon moved into the woods near the destroyed guns, ready to hold fast. Our mortars and HMGs weren’t doing much better and stayed pinned down on the fringe of the battle.

2nd Platoon continued flanking to the south, moving towards the cluster of houses, staying hidden in the hedges and fields, steering clear of the heavy fire to their left.

The AT guns over there thundered away and with an immense bang, destroyed the third of the original three assault tanks that started the offensive.

Despite being pinned down, our mortars also managed to kill a team of their paratroopers and one of their HMG teams!

This was not good; they had gotten three of our StuGs. The other three which had just arrived, turned tail and fled. The cowards. This was typical of Operation Lüttich: none of the armored divisions seemed to have the guts to fight.

Our 1st Fallschirmjäger Platoon had taken a beating so far, so 2nd Platoon, which had been occupying the chapel, moved forward to assist them. The HMGs had also been moving up earlier, so together we formed a relatively strong force–with or without the StuGs!

We kept up fire on them, pinning many of their teams, but without our tanks they were well protected in foxholes and bulletproof cover. 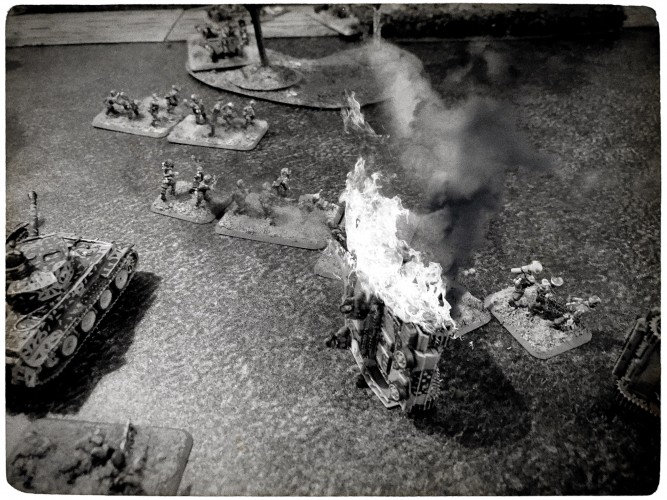 The battle takes a toll.

We still had no reinforcements, but we hadn’t for days, so that was no surprise. We’d have to make do with our air-dropped supplies for now. Thankfully our fighting spirit returned after surviving the German onslaught. Without their tanks they weren’t so tough, so our 57mm AT guns, mortars, and HMGs all unpinned and got back in the fight!

Our 3” guns opened up on the still advancing Tigers but didn’t manage to kill any. Those bastards were rolling blocks of solid steel armor!

Our mortars re-targeted, choosing to focus their fire on newly-appeared platoon of paratroopers who had been in the chapel. Our boys pinned them down and killed one of their teams outright!

This was turning into a bloody stalemate. With no Ami tanks in sight, our Tigers took up an anti-infantry roll and fired their MGs at the American infantry which had appeared on the southern flank, killing two teams.

Our 7.5cm guns between the houses finally had a clear line of fire and also shot at the American infantry, killing another team.

The real scourge though was the Americans’ big AT guns, the “three inch” ones as they called them. Assaulting them would be risky; they had a lot of firepower concentrated in one area, but it would have to be done. The Tigers were safe for now, but sooner or later the Amis would get lucky.

The Fallschirmjägers assaulted the guns again, but were met with an overwhelming amount of fire, and fell back in chaos.

2nd Platoon had been pinned down by German MG fire from the Tigers as well as from a lucky round with their anti-tank guns. Unfortunately, they weren’t getting back on the move just yet. Nonetheless, Jerry didn’t have too much fight left in him. This was it. If the HMGs could whittle down their paratroopers, 2nd Platoon might be motivated enough to get back on the move and assault the guns and take our objective. They swung around the left flank, moving behind 1st platoon, keen to start firing on the Germans.

1st Platoon was also moving up, in front of the HMGs, taking up firing positions to try and hit the paratroopers, but couldn’t seem to keep them down.

Our mortars took out a team or two and one of our 57mm guns also managed to put a lucky anti-tank round through one of them. This was a mean, mean fight. 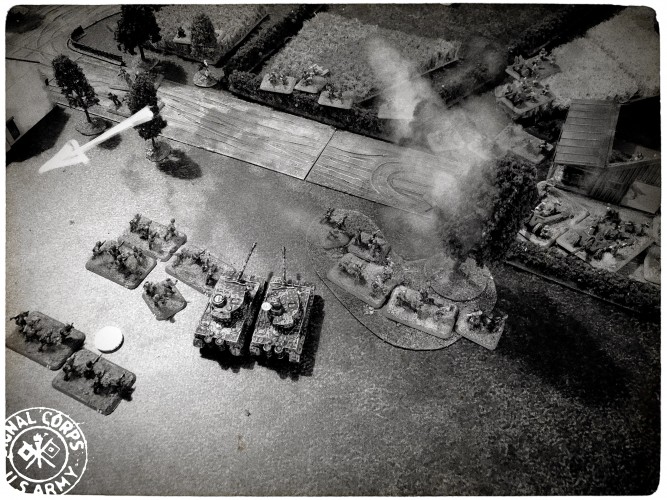 The Amis were bleeding us. Our Fallschirmjäger platoons were being decimated as their infantry attacked from both flanks. Our mortars and HMGs laid as much fire upon their deadly HMG platoon as possible, and wiped it out completely. We also hit the other platoon next to the HMGs and pinned them too.

With their infantry teams pinned down, our Tigers made a last-ditch assault attempt but only managed to kill a single infantry team.

The offensive, it seemed, had failed.

A platoon of four Shermans from 2nd Armored came barreling down the hillside towards our position. A little late, fellas! They would have to cross a lot of terrain before they were in any position to break through. We focused all our fire on the paratroopers: if we got really lucky we might force them to turn tail and run, but that was unlikely.

Our attempt to break out had stalled for the time being, but Jerry sure as hell wasn’t getting up that hill!