Omaha Beach. An update of the old Normandy Battles Scenario The Battle for Easy Green. We tried to play it as a straight FUBAR with the historical Order of Battle, but it seemed skewed towards the Americans too much so we ended up using the Objective Locations in the published scenario.

Also another case of the old wire counters. We used the new rules where you had to move in to lift them. Also we used a Sherman Dozer and said it could lift tank traps and wire, but not mines. For the DUKW’s we used them as a single unit for landing rules, but once on the beach they became 4 vehicles towing the artillery.

We used the original OB from the scenario book. For the 28cm Nevelwerfer’s we proxied 7.5cm infantry guns but gave them the same stats as Naval Artillery. For flame throwers we used paratrooper hand carts. We substituted 2 T28 AA guns for the M16s. We have M15s.

We thought it was going to be a cake walk for the Americans, however indirect fire kept the Americans pinned for what seemed like forever. Even with a rally rating of 3 the American units took forever to get moving and the congestion resulted in lots of casualties. The American cycled several Assault platoons during the game. Finally one platoon made it off the beach and another landed on the far flank. With out enough indirect to cover everything, the Americans started to get off the beach. As the Americans spread out the indirect was less effective and had to shift fire, rolling to range in as opposed to repeat bombardments. That was when things started to happen. 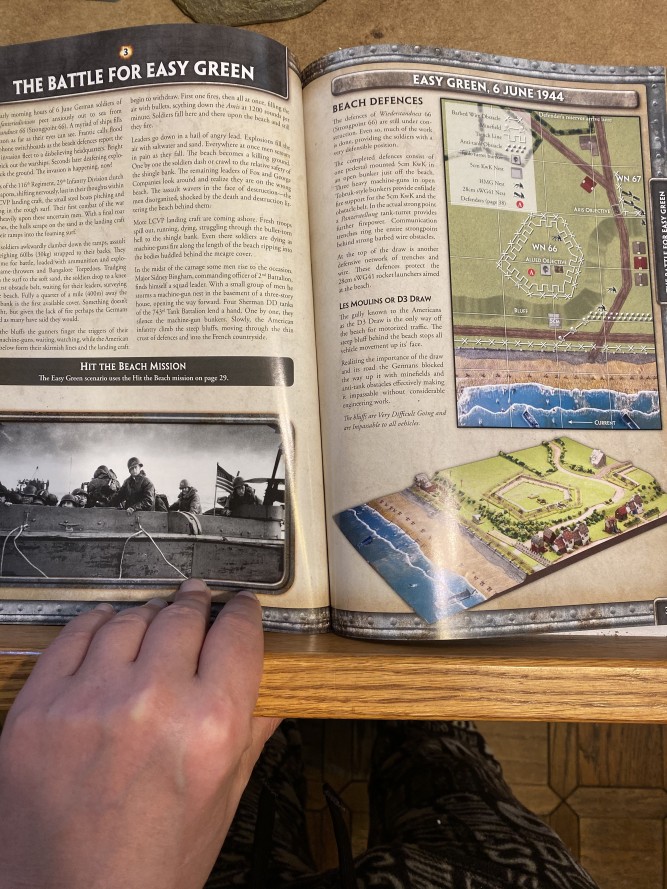 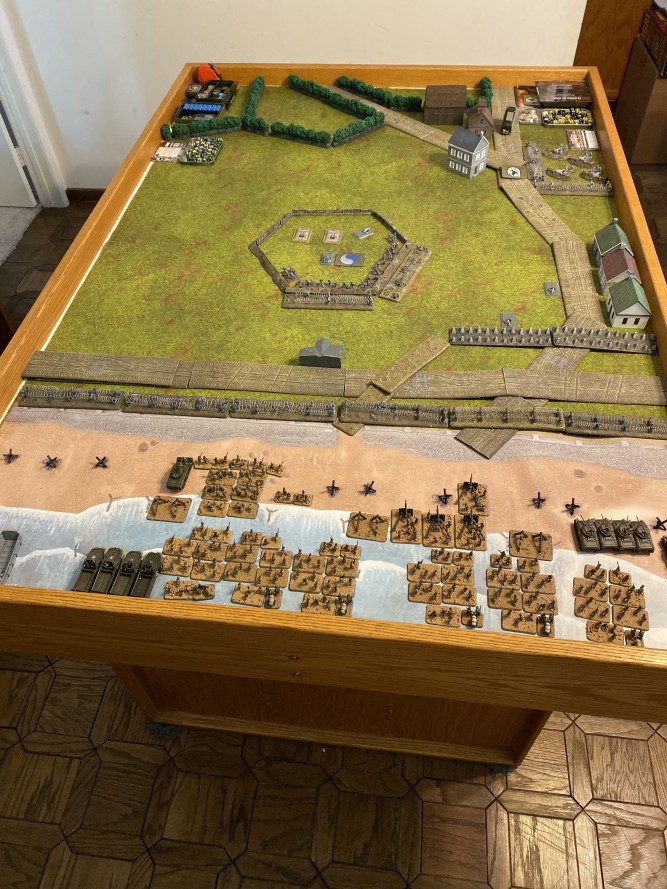 Board Lay out Easy Green. Note that there is a difficult slope, impassible to vehicles per the diagram. Also the strong point is enclosed with wire. We just did not have enough. As we remove wire we add it to strong point. 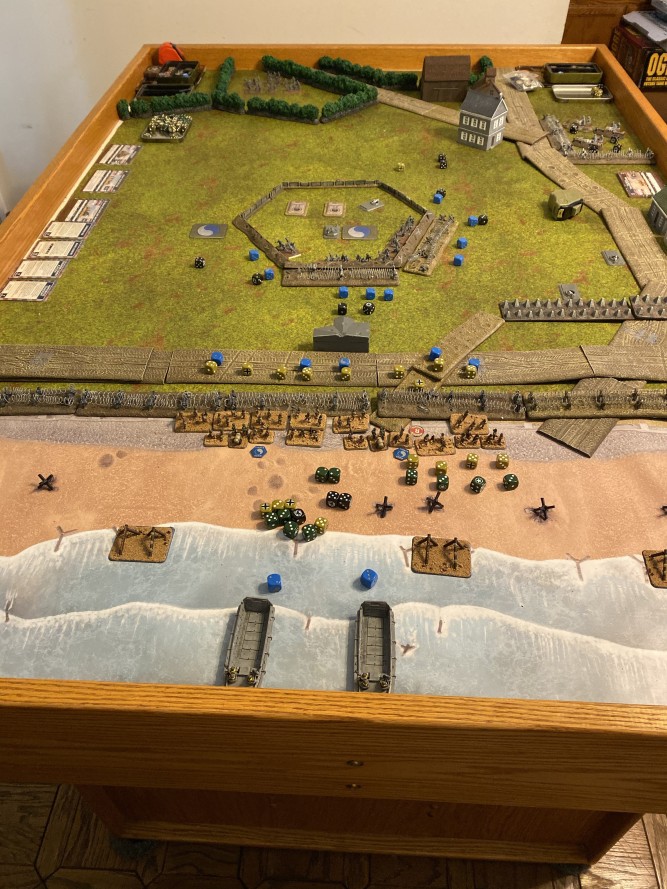 After Bombardment and Invasion, prior to German Turn one. Half the DD tanks drown. 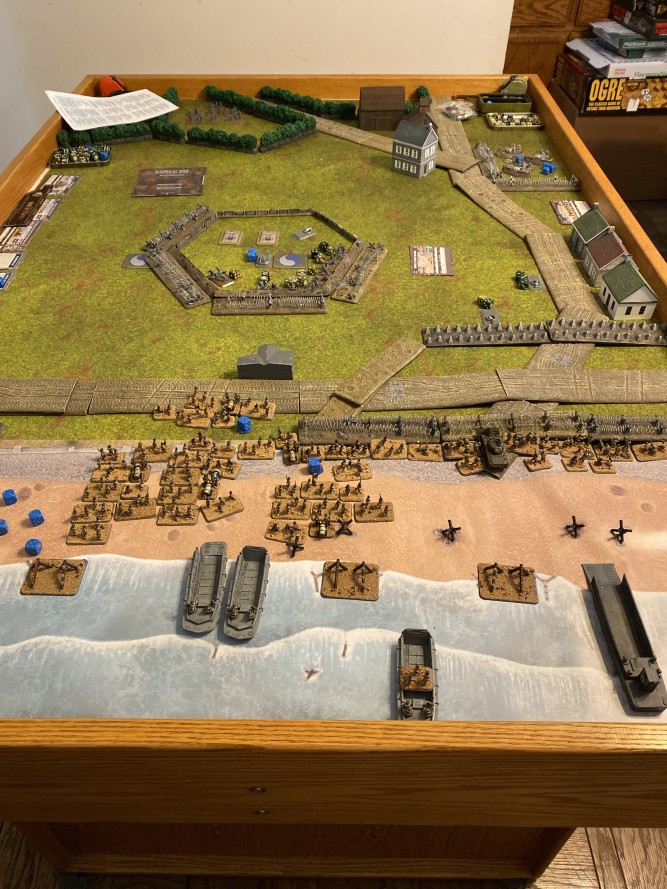 Bottom of the third. Americans are constantly pinned on the beach by mortars. We are simulating the 28cm rockets the Germans have as if they were Naval Gunfire in reverse. It's brutal. Finally one mangled platoon makes it off the beach and the engineers are finally in position to start clearing the road. 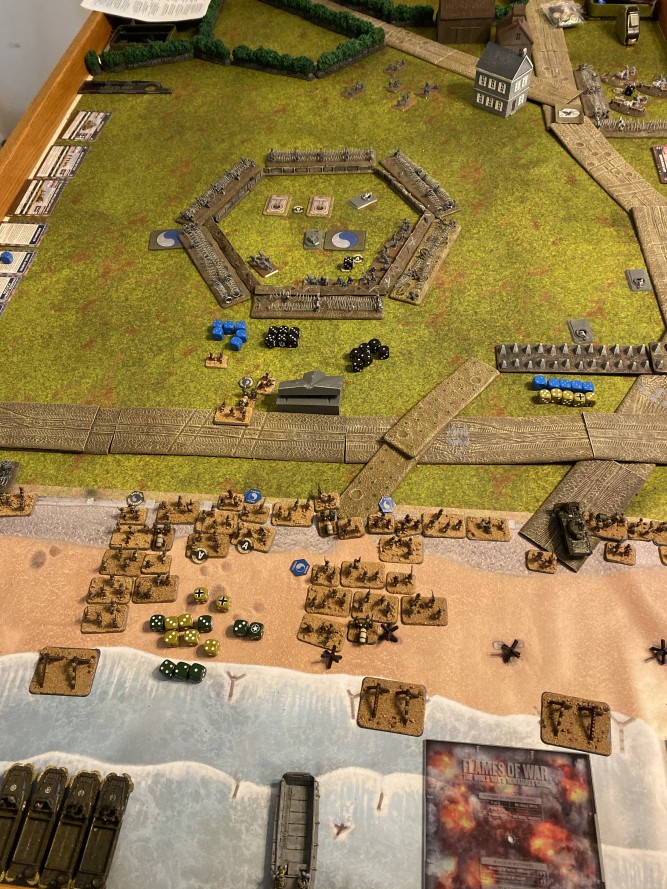 Bottom of the 5th. Americans have killed the 5cm Bunker and started breaching up the road. Everybody else is still hung up on the beach. The Americans only get 1 Naval Artillery Bombardment in 12 turns. 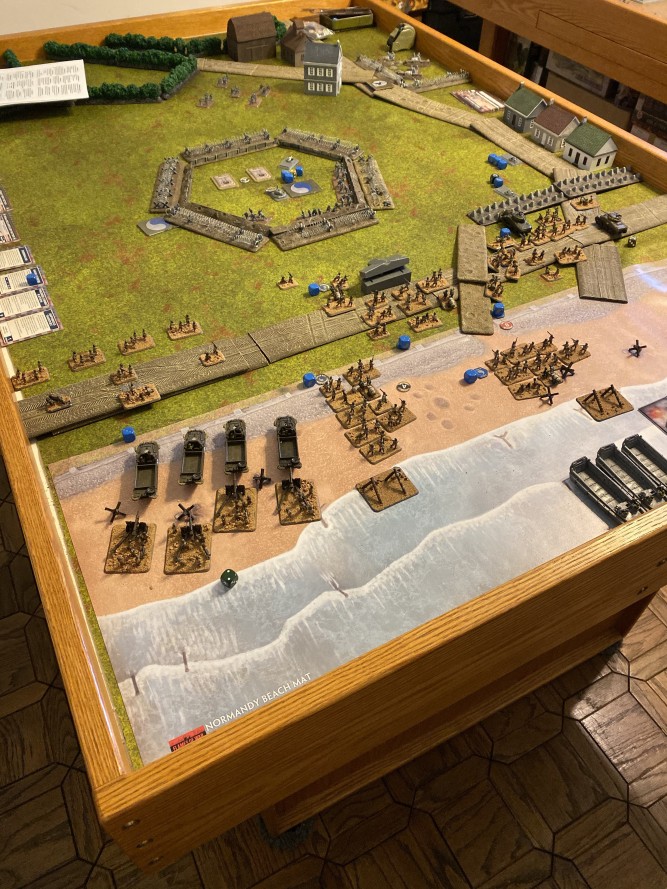 Botton of the 7th. Finally the US starts to move. Some platoons finally unpin and a platoon that landed off to the flank breaks thru the wire and moves up. The engineers move to Breach the next barrier line. And the DUKWs land the Artillery. 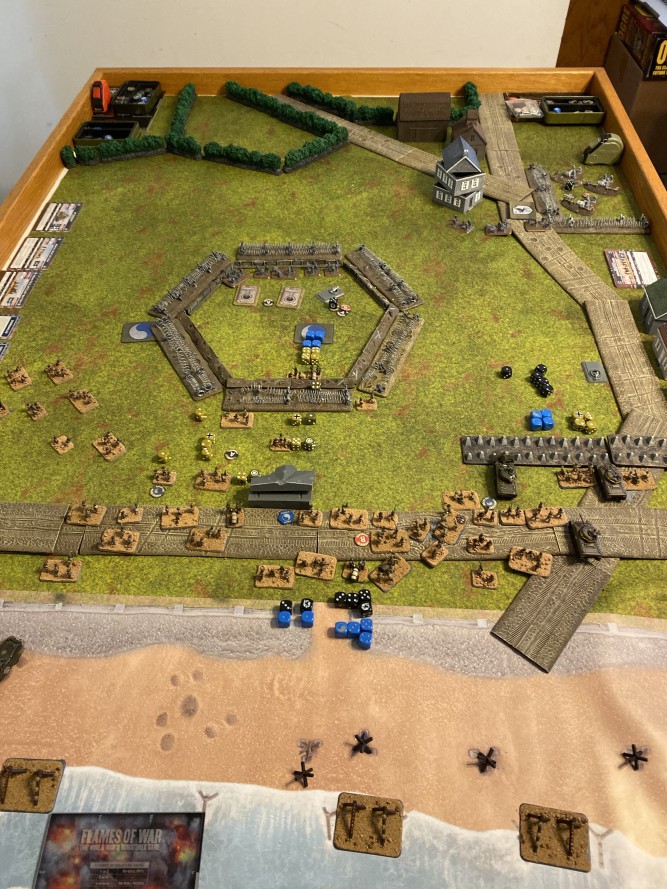 Bottom of the 8th, and a miracle happens. Suddenly all the American un-pin and surge, the 28cm sWG41 nests are pinned, and down goes the French Turret Bunker and one MG Tobruk to Tank Fire. Only the tank traps are keeping the tanks from pushing on the German Objective. By this time we had added a second US objective to compare results if we had not used the Normandy Battles rules. 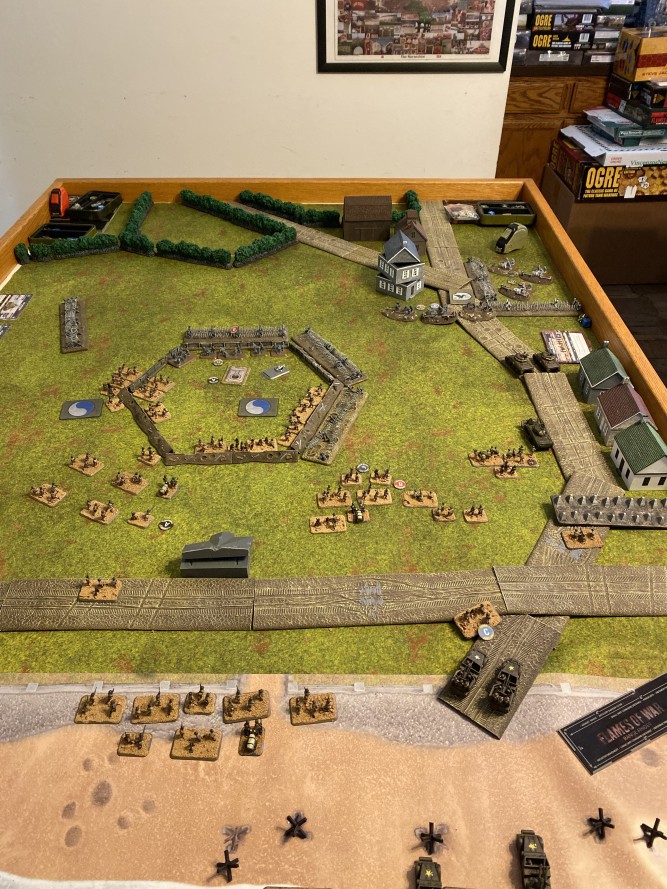 Bottom of the 11th. The Strong point is about to fall. The next two assault phases and the Germans are pushed out of the strong point and the US siezes one Objective before the end of Turn 12. Very close run.